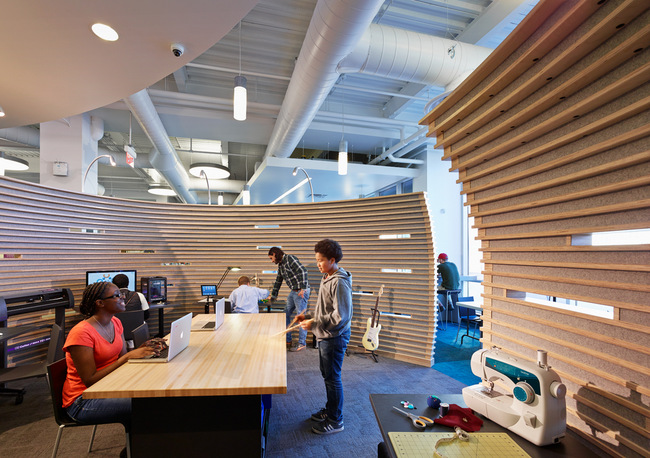 The Studio Hive, a part of the Carnegie Library of Pittsburgh’s East Liberty Teen Zone, has been awarded an AIA 2016 Small Project Award. Designed by GBBN Architects as part of the larger Teen Zone, the Studio Hive is a space for teens to work on multi-media and digital productions.

As part of an ambitious capitol project, the Carnegie Library of Pittsburgh (CLP) is dedicated to providing opportunities within their libraries for teens to explore the worlds of literature and technology while connecting with others. GBBN created the Teen Zone in CLP-East Liberty by transforming a space into places where teens are encouraged to discover their talents, learn new skills, and collaborate with peers and mentors.

Based loosely on the form of a beehive, the Studio Hive provides an intentional personal space for teens to engage in creative exploration within a focused place for concentration. Even so, the design allows for subtle views into and out of the hive, facilitating a feeling of community and connection to others. GBBN Principal Anne Chen, AIA stated, “thoughtful design and meticulous fabrication of the Studio Hive ensured the views, lighting, acoustics, and form all worked in concert to create an encouraging environment for teens that evokes curiosity.”

On this design, the AIA Small Projects jury noted that the Hive is “a graceful solution to a ubiquitous problem. The project is especially innovative in how it quantified the positive effects of design – which could benefit a myriad of future projects.” 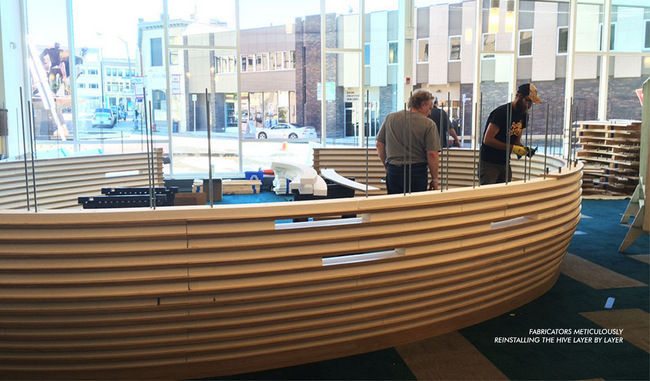 The Studio Hive is crafted of wood and sound absorbent industrial felt. The design team developed a 3-dimensional digital model of the Hive, which allowed designers to tune and refine the form to minimize material waste. This model was then shared with fabricators River Productions to collaborate on the further development of design details and structural form. Fabrication directly from the model eliminated the need for conventional construction documents saving time and eliminating costs. The fabricators fully installed the Hive in their studio as a mock-up, then disassembled it and permanently reinstalled the Hive at the fully operational and occupied library.

Since initiating dedicated programming for teens, CLP has seen measurable successes such as a significant increase in teen attendance at programs and events as well as in general attendance. After the opening of the CLP-East Liberty Teen Zone, one teen patron exclaimed “the teen space is the single greatest thing to happen in the history of the library in America!”

The CLP-East Liberty was also the recipient of a 2011 AIA Pittsburgh Honor Award, designed by EDGE studio.