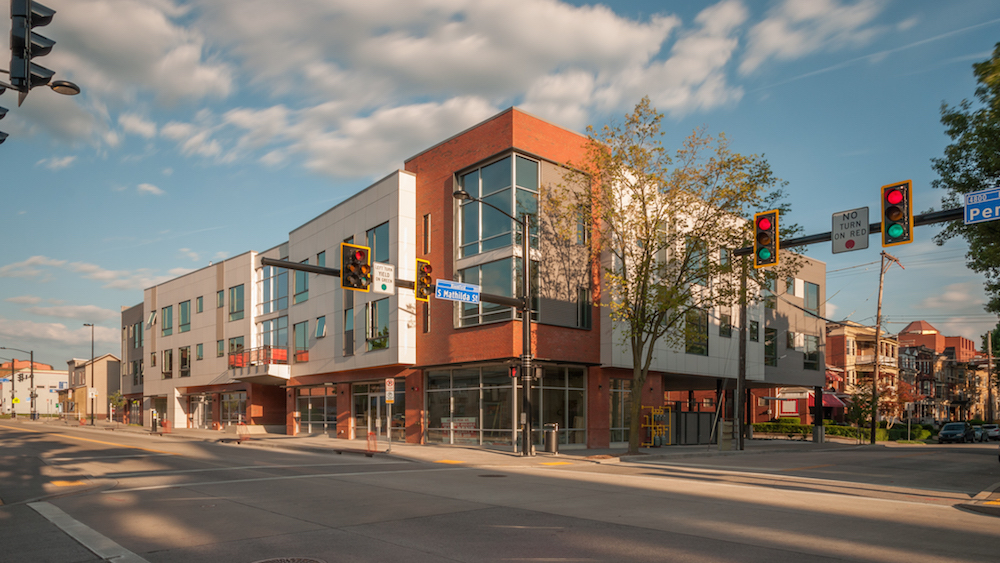 ACTION-Housing’s Penn Mathilda development designed by mossArchitects seems to defy conventions about what affordable housing is, can, and should be. The project provides 39 units of affordable housing with half reserved for veterans.  Additionally, the commercial spaces are fully leased to arts-based, locally-grown businesses including Assemble, Level Up Studios, and Silver Eye Center for Photography.  The project is contextual, adjacent to public transportation, and takes into consideration the Penn Avenue Corridor Master Plan that recommends that new developments be pedestrian-oriented and contain ground floor retail, restaurant, and gallery uses to promote active storefronts.  Columns recently sat down with developer Lena Andrews of ACTION-Housing and architect Andrew Moss, AIA of mossArchitects to discuss the project.

Columns: How did you find the right architect for this project?

Lena Andrews: Over the last sixty years, ACTION-Housing has built and managed high quality, high performing well-managed buildings – in our more recent work, we’ve been getting more focused on design and being contextual with the surrounding environment.

We have a few architects who do excellent work for us, but we were looking to expand this group. We began researching different work around the city, and we liked a lot of your [mossArchitects] work in Lawrenceville and other urban neighborhoods.

We knew that Moss was responsible for the Penn Avenue Corridor Master Plan (PACMP, 2008) and that they had built housing on Penn Avenue. Our site was even identified in the plan as the gateway to the arts district.

So we thought ‘Moss has spent a lot of time studying Penn Avenue and has done work that we like,’ so we talked to Andrew and they did some preliminary planning work, we liked that, and then we went forward with it.

Columns: How did you approach this project as an affordable housing and tax credit project?

Andrew Moss: We approached it the same way we would approach any other project we would do.  Our urban architecture experience and design approach was a good complement with ACTION-Housing.

LA: At first we were nervous about using an architect without low income housing tax credit experience, but our contractor had done tax credit projects before and had been through compliance. There’s a ton of paperwork, and it can be overwhelming the first time you go through it.

I think the billing is more complicated than other projects you have worked on, Andrew?

LA: Though I thought it would be a bigger hurdle to get over in terms of meeting all of the requirements related to the tax credit program, we didn’t really have problems with that.

Now, Moss will have to do another tax credit project because you have developed this expertise.

Columns: When ACTION came to you and you knew the context from the PACMP did that get you excited about participating in this project?

AM: Yes, it is cool to have a project that is a follow up to another project that you’ve done in the past. When we did the PACMP this was one of 10 key sites that were identified as being important for the overall redevelopment of Penn Avenue, and even of those, this was one of the top three that was most important.

It was a shared priority between ourselves and Action-Housing that this site had to have a strong commercial storefront to help reinforce the growing Penn Avenue commercial district. We wanted this building to reinforce the commercial context. 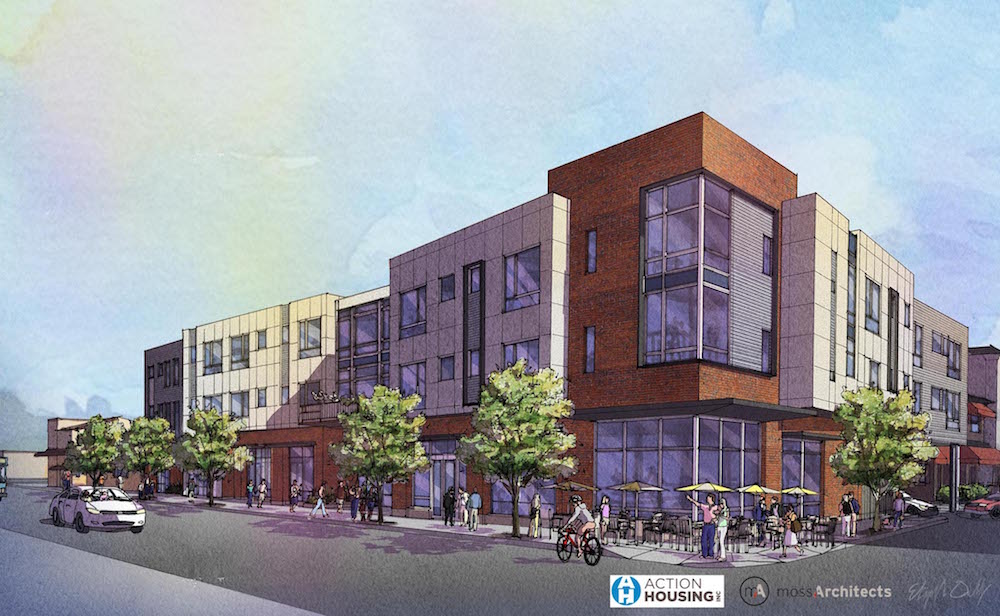 Here is one of the early renderings that we did, and really … it looks like that! (laughing)

LA: A lot of people have told me that it feels like it was always there – like it goes along with the other buildings on Penn Avenue. This is what we intended to do.

Columns: So I know that site sat for a long time. How did it come on your radar and how it you acquire it?

LA: We found out about the site from the Bloomfield-Garfield Corporation. ACTION-Housing specializes in extracting complicated sites out of real estate limbo and there were lots of liens and complicated history on this property. We had an opportunity through a national organization that we belong to called the Housing Partnership Network. We were put in touch with a person there who could help clear the title. That allowed us to purchase the site for $165,000 – an affordable amount.

We need a low acquisition price to make affordable housing feasible so we were excited to get it. 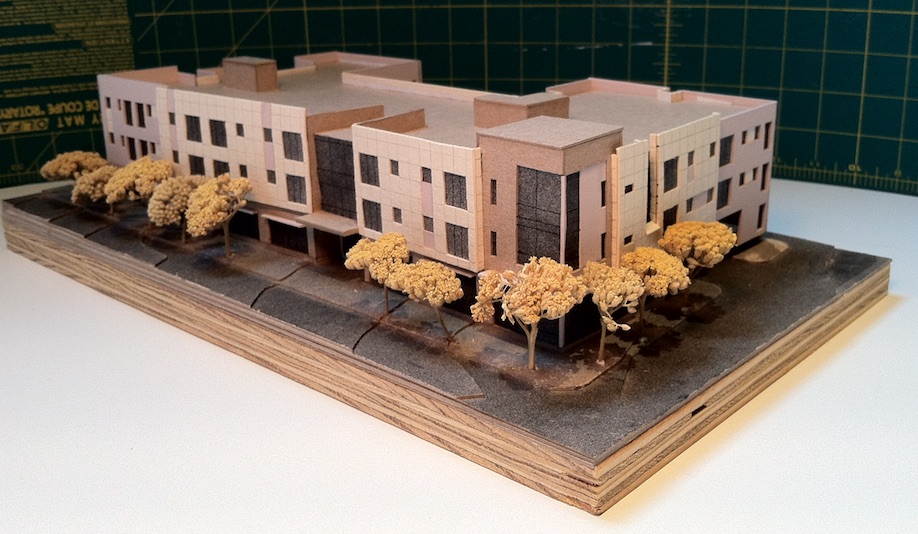 Columns: It’s interesting how similar the initial designs are to the finished product. Can you tell us more about the design process?

AM: We did a model early on and it is pretty similar. There certainly are pieces and parts of it that were tweaked through the process but I think – I don’t want to say the design was easy – but I think, when you have thought about an area and you understand it pretty intimately like we did, the design solution that we came to in the beginning and stuck with came pretty quickly, which is great.

I once heard a quote from Picasso, someone asked him ‘how did you do that drawing so quickly, it just took you a minute and you think it is worth so much.’ And his answer was something to the effect of, ‘that drawing didn’t take me a minute, that drawing took me 50 years.’ 50 years of thinking and development of ideas. Sort of that same story here.

Columns: This is such an important point about the value of architecture and architects! When you are hiring an architect you are hiring their years of experience, their education, their team. So often architects are siloed into ‘this project’ or ‘this site,’ instead of looking at the breadth and depth of their work along with experience.

AM: I always tell the clients that the basis of every project has three components to it. There are our clients goals and needs for the project, there’s the site and the context, and there’s us and our experience and what we are bringing to the table. We bring those three pieces together and hopefully end up creating a great final solution that is a combination of all three.

With this project, we knew that we didn’t want the main residential entrance to be on the corner, we really wanted to reserve that for commercial storefront. We wanted the building to be at the street (zero lot line) and we wanted the parking component of it pulled to the back. We also didn’t want the parking in the back to just feel like an open parking lot and so we tried to let the building wrap around a little bit. 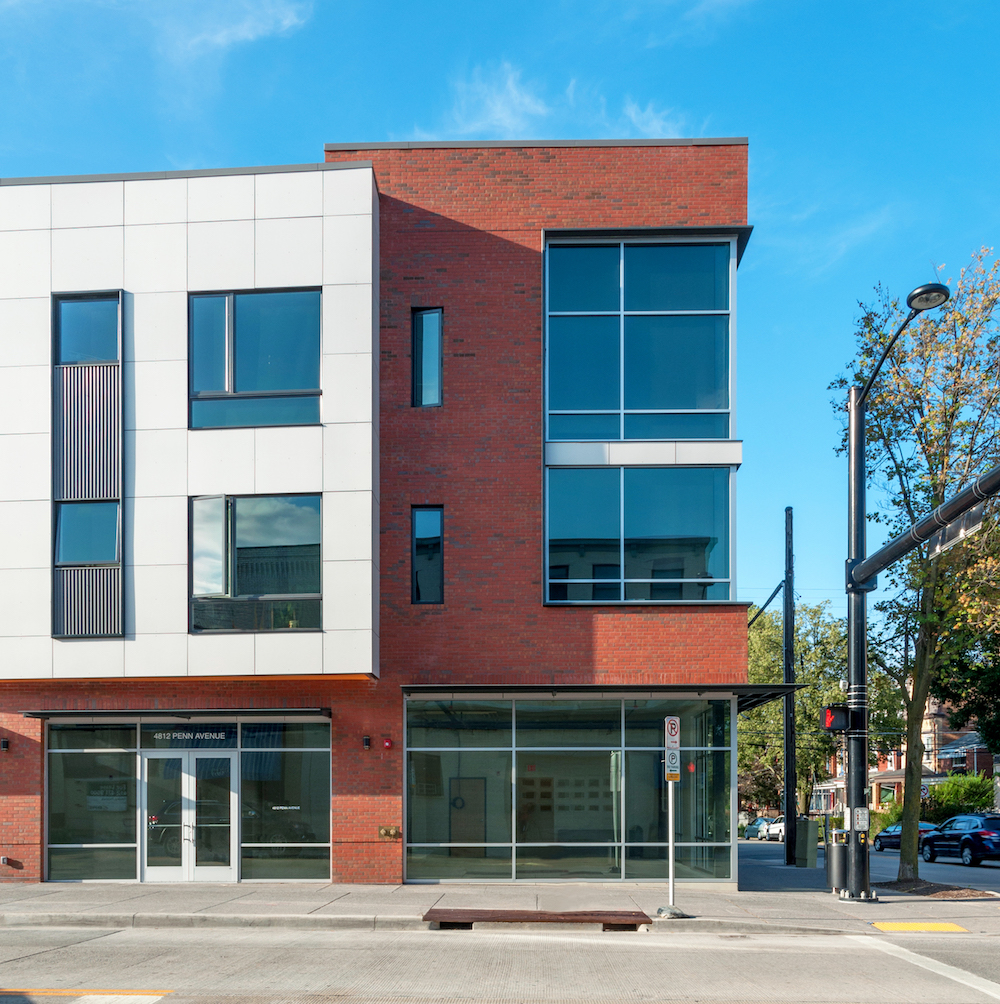 A design aspect that did change was the use of brick. I am happy with the use of brick, but that actually came from ACTION-Housing. I think probably our very first design proposal didn’t have that but it was early on in the process, and we happily embraced it and I think it was an important component to add. I like that the corner piece of the building uses that brick, it anchors it.

Columns: The building has large openings and allows in a ton of light which strikes me as singular for many affordable projects that we see.

AM: Right, we did not try to design this as ‘an affordable housing project.’

LA: Yes. We never go into a project and say ‘we want to build a building that looks like affordable housing.’ It is our goal to just build housing, high-quality housing for people to live in.

AM: And that’s how we approached it too. We really would have approached this the same way whether it was high-end condos or affordable housing our design approach to it was essentially the same. 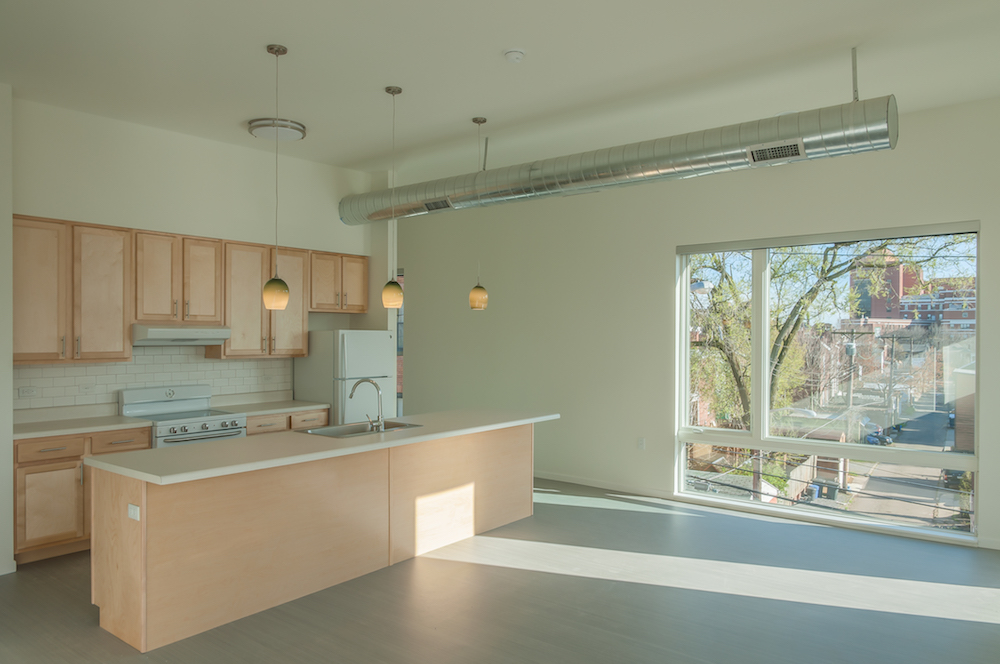 LA: This building definitely has more and bigger windows than any other project we have built and we were a little worried about performance since we’ve been working a lot with passive house. But so far it is performing well despite having enormous windows.

Columns: So let’s talk about what was changed or left out of the design.

LA: I don’t think we lost any major components of the design. There was a specific design element in the corridors and that was the first thing to go.

There were originally overlapping hexagons as a ceiling detail but when the contractor priced it we had to let that go.

There were balconies in the original design, and we removed those because of concerns from of our management company. There were also operable garage doors instead of some of the windows originally and we were concerned about those because of the pollution on Penn Avenue and because of energy efficiency – so there were a few reasons to remove them.

AM: That was probably a good change.

LA: Yes, and it wasn’t cost. That was a practical decision. But changing the corridors was an obvious thing that could go in terms of cost.

AM: And I find that every single project, whether it is a 3 million dollar house or affordable housing, there are priorities, you have to prioritize. We have yet to have a project where people say “keep putting it in, keep putting it in!” and that is part of the design process as well.

Even on expensive jobs there is still a budget you are working towards and you end up within that budget prioritizing where you have your special moments.

So while we wanted to have a dynamic and interesting corridor to walk through we thought it was more important to make sure the exterior and the street presence was strong and that the homes where people were living inside the units were really good.

There’s nothing fancy about the interior of the homes. There’s great light, generally good space, they are well built with simple materials. 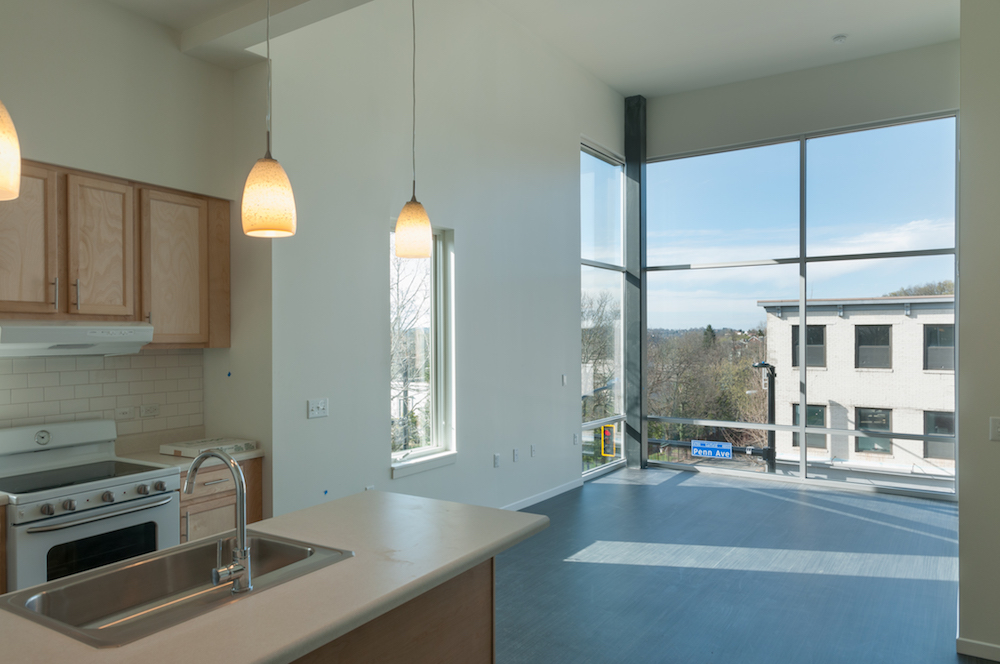 LA: There’s a lot of kitchen cabinet space and the finishes are high quality. Our units are competitive with almost anything on the market right now in terms of finishes and design.

Affordable housing has a reputation that we don’t use high quality materials, which we do. We also use environmentally friendly materials, such as low-VOC paint, Marmoleum flooring, etc. So it is a healthy place to live. And it has operable windows!

We talk so much about the loss of affordable housing and what’s happening to the market dynamics in neighborhoods, but we don’t talk about the quality of the buildings that are being constructed.

If you look at our last five or six projects you see that is not the case.

The Low Income Housing Tax Credit (LIHTC) program is what has enabled buildings like Penn Mathilda, because it is a lot more flexible than other previous subsidy programs.

This was an $11 million project and $8.4 million of that was in tax credit equity provided by BNY Mellon and the National Equity Fund. We had additional funding through Bridgeway Capital, R.K. Mellon, the Heinz Endowments and the Urban Redevelopment Authority.