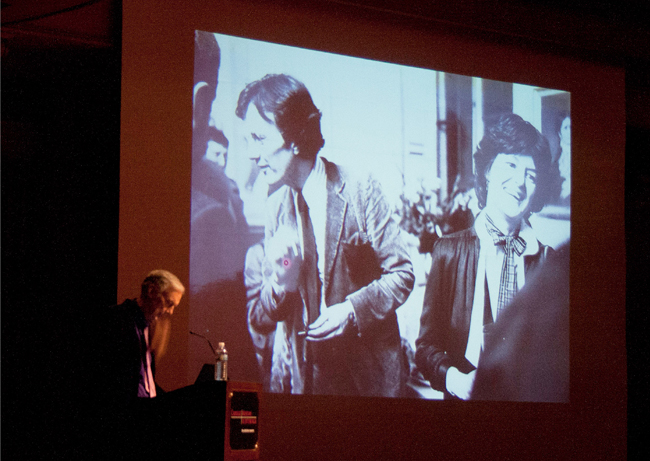 Charles Jencks stands at the podium, tall and lanky but defiantly confident. A well-packed Carnegie Music Hall applauds the world-renowned landscape architect and architectural theorist as he pipes out a few initial thoughts to calm the diverse crowd. After a brief description of a 16th century painting on the screen above his head depicting hope on the horizons, Jencks jumps straight into what has propelled him into the international spotlight; Maggie’s Centres.

Before even giving an overall synopsis of what his famed centers are, Jencks makes sure to tell the audience what inspired them: hope. He explains that hope is an architect’s best tool when creating any built environment; buildings are trajectories into the future – a horizon and a hope of a better tomorrow. When designing centers for the ill or terminally-ill, the word ‘hope’ carries a much deeper significance. Designed to instill hope in patients whose doctors even have lost faith, the centers were created to be intimate and psychologically-pleasing, juxtaposing their monstrous counterparts (hospitals) which stand ostentatiously to the rear.

Maggie’s Centres began when Maggie Keswick Jencks received a discernible cancer death sentence. At first, despondent to the doctor’s reaction and the severity of her disease, Maggie sat awaiting death. Inspired by her husband and continued family support, she eventually gained the courage to live her last days on this earth with purpose and valor. Maggie’s Centres were born. 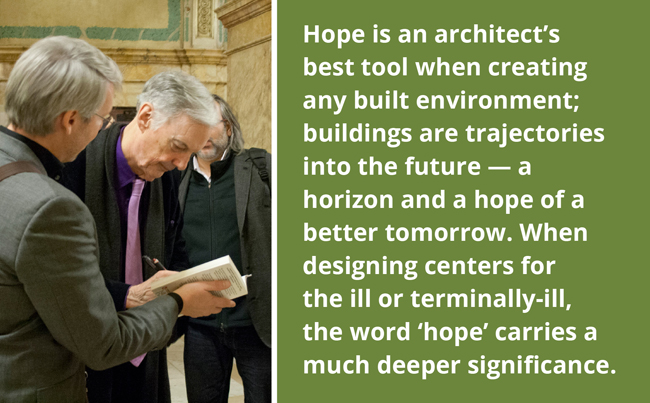 Adamantly working with her husband, Maggie wanted to create a place that was a refuge from the sterility hospitals offered. They envisioned a place that was removed from the harsh realities hospitals – “medical monstrosities”, as Jencks called them – failed to eradicate in their efforts to heal the sick. Both Maggie and Charles believed in the ability of a building to uplift people and create a positive environment that would act almost as an “architectural placebo”. It was clear to see from the initial studies and research that the project is based in the psychological understanding and healing power of spatial experiences. Maggie’s scientific wit shown through as her husband’s keen eye for spiritually uplifting spaces complimented a well-grounded idea. It is important to note the two of these individuals worked heavily together prior to Maggie’s diagnosis but their most fruitful endeavors happened during their last 24 months together.

In 1995, after two years of fighting, Maggie lost her battle with cancer leaving behind a newly-formed Scottish-registered charity that would go on to build its first center one year later. Richard Murphy’s design was the initial Maggie’s Center in Edinburgh, a building nominated for a Stirling Prize in 1997. The first glimpse at creating a space for the ailing patients displayed warm materials and an infusion of nature that allowed the escape to have a Zen quality unlike that of the stark hospital standing right behind it. Compact and comforting, the center painted a picture of self-help. This was to become a place where patients could escape to and receive consultations from psychologists as well as socialize with other ill hospital constituents. Interactions that occurred within this center were the most important part of its existence thus the interior was the highlight of the project, a theme that would remain pertinent over the next twelve centers.

While Jencks did not review each center, he flashed several pictures of some of the more prominent buildings including works from the likes of Frank Gehry, Zaha Hadid, and Rem Koolhaas. Perhaps the most famous center of the series is the Frank Gehry-designed building in Dundee that opened in 2003, winning a RIBA Building of the Year award the following year. In true Gehry fashion, it is a dazzling play of geometric volumes met with a grounded materially-comforting interior. Large stretches of glass look out upon a small green hillside, projecting the patients outside, even if they cannot physically be there. It seems Gehry paid close attention to Jencks during the initial designs because the audacious nature of the exterior was closely followed by the rational and humanized interior, much as Maggie would ground Charles’ artistic vigor. Zaha Hadid’s design in Fife opened three years later and featured an angular tribute to a contrast between manmade and natural features – a staple of the centers themselves. Her designs emphasized a slight of green in the shadows of Victoria Hospital, a place that the terminally-ill could find serenity and hope.  Doused in black on the exterior and starkly white on the interior, Hadid took inspiration from the idea of the healing power of the crystal. While the center’s exterior may be more of a bold presence to those unaware of it, the interior feels oddly warm and not sterile and lifeless as her spaces tend to portray.  After presenting the built works, Jencks happily passes along that two new centers are to be built in Lanarkshire (by Neil Gillespie) and Oxford (by Wilkinson Eyre). 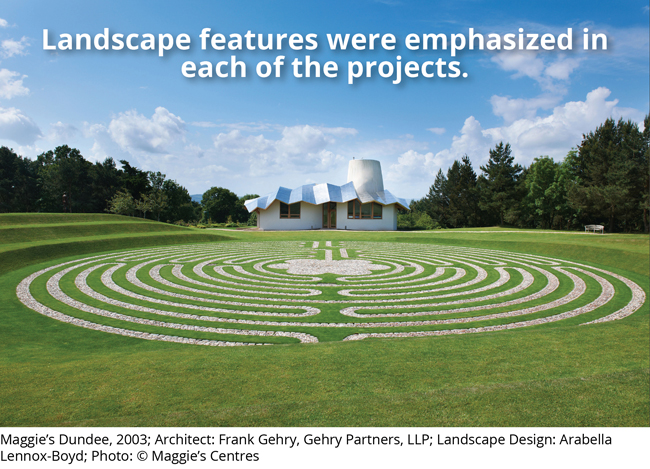 Closing out the lecture, Charles Jencks referred to his foundation’s centers as “wonderful little gems”, empowering and uplifting the spirits of those who had terrible illnesses. A very ‘Wright-ian’ concept stuck through each of the projects, the blending of inside and out. Landscape features were emphasized nearly as much as the center itself and their relationships were at times seamless. As the centers have progressed through time, their relationship with their sites and surrounding nature has only grown, and as more opportunities arise with larger financial capital, it seems that will continue to increase. He adds that art has also played a crucial part in the spatial experiences. Citing the often lackluster and mass-produced artworks in most hospitals, Jencks and his foundation believe that art helps enhance an environment. With each passing opening, more pieces of art find themselves in these prestigious facilities, becoming integral to the overall end-product. After opening, each center anticipates 2.5 to 3 million pounds of funds raised in the first two years of operation which lends itself to the design, construction, and upkeep of the next center. Working with rising and prominent stars in the architectural community has aided in doing just that, quickly surpassing fundraising goals. It is there that Jencks sees a true value of curating such a vast portfolio of prominent designers – there is a creation of quality and value that ‘cookie-cutter’ architecture would not provide.

Summarizing Jencks’ body of work can be described in three words: hope, horizons, and (self) help. These principles have guided the successful design and construction of thirteen centers which have uplifted patients’ expectations of life while providing them with a place to gather, discuss, and find comfort during some of their darkest days. Maggie’s Centres weren’t created to heal one of the worst diseases on earth, they simply exist to help those living with it find contentment amongst their peers, doctors, and nurses in between Chemotherapy treatments.