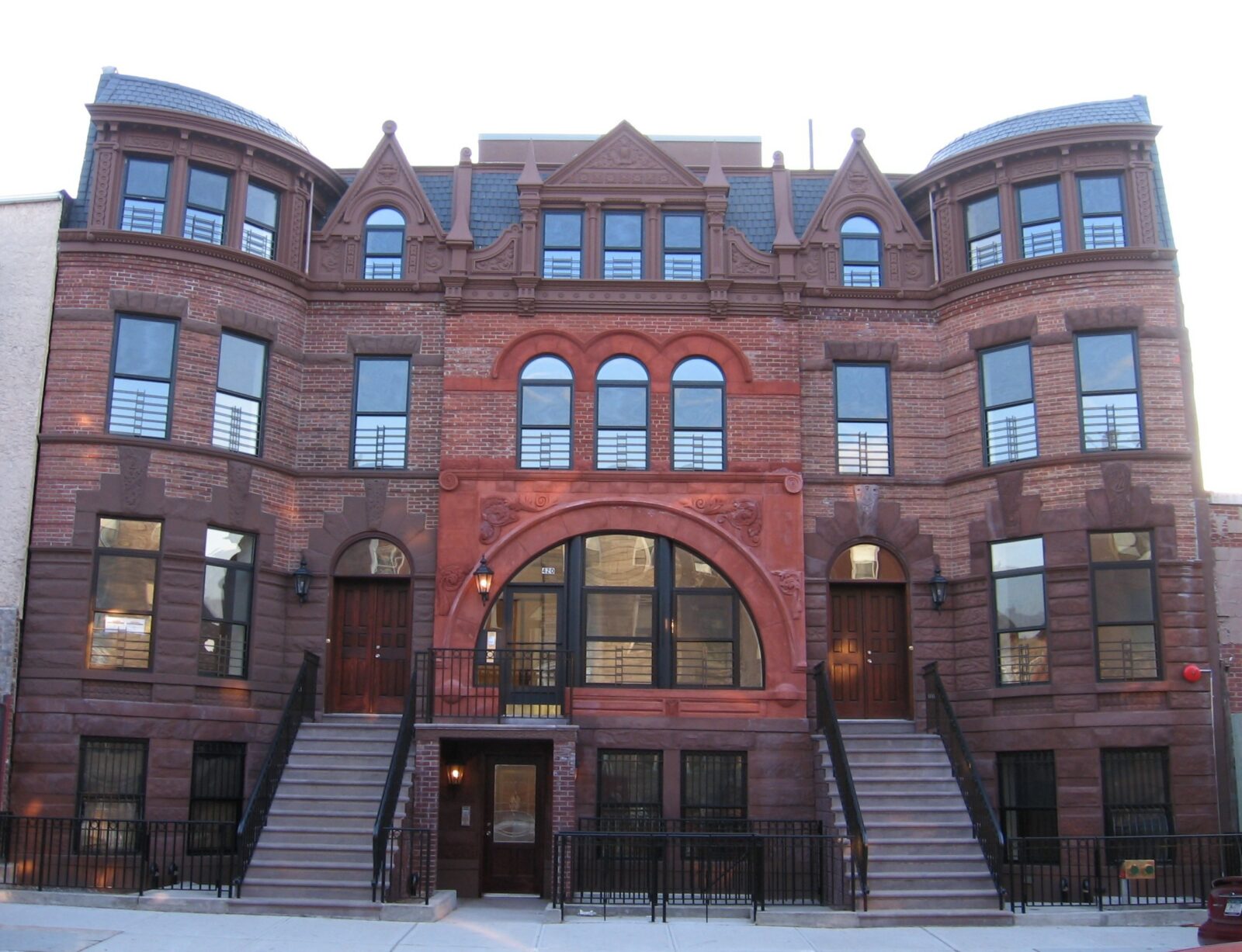 These days Pittsburgh and Brooklyn share a similar dilemma: the rapid acceleration of a real estate market that makes affordable housing development and preservation highly challenging for nonprofits.  Recently Columns spoke with Kuza Woodard, Director of Real Estate for the nonprofit advocacy group IMPACCT Brooklyn about the creative partners and funding mechanisms that have aided his organization in its mission to maintain and develop affordable housing options in Central Brooklyn.

Maya Henry, Editor, Columns (MH): Tell us a little bit about IMPACCT Brooklyn and your role there.

Kuza Woodard (KW): IMPACCT Brooklyn has been around since 1964, so over 50 years providing all kinds of community improvement services in Central Brooklyn.  Our focus areas are affordable housing, home ownership, as well as an economic development department that focuses on improving business corridors.  We also have a social services department that provides support for folks with special needs.

The way the organization started was as an advocacy agency and we still have a community and tenant organizing department that gets involved in community safety issues and whatever issues the community deems as important.

So that’s who IMPACCT Brooklyn is. I’m the head of the Real Estate Department that focuses on preserving and creating affordable housing in Central Brooklyn.

So my role here is to find sites for us to develop and put together the financing which is kind of like a jigsaw puzzle.  It usually takes four to five different financing sources, just to make the transaction work.  A typical transaction would involve using Low Income Tax Credits and then we have to get City or State subsidies – subordinate financing – and then a private mortgage to finalize the deal.  And then we will often have to go and ask our elected officials for a capital grant to cover any gaps.  So that’s essentially what we do for each project.  We figure out what the total cost is going to be and we figure out the best mix of financing tools to fund it and it’s a lot of fun for folks who like to solve puzzles, you know.

MH: In your role as Director of Real Estate, what has been your favorite project?

KW: There have been a few projects that have been real favorites.  There was a project about 10 years ago that was a condo project.  Essentially these were 3 abandoned buildings that were owned by HUD and we combined the 3 buildings into a 12-unit condominium project that was affordable to people earning between 80% – 125% of Area Median Income (AMI) in New York City at the time.  And the beauty of that project was that it was on the border of Clinton Hill, and Bedford-Stuyvesant, which at the time was not gentrified, and it was an eyesore and once it was renovated you could see the wave of investment throughout that neighborhood.  It really was an anchor project and it still looks really good now.  The buildings didn’t have a landmark designation but they were preserved in a historic fashion. 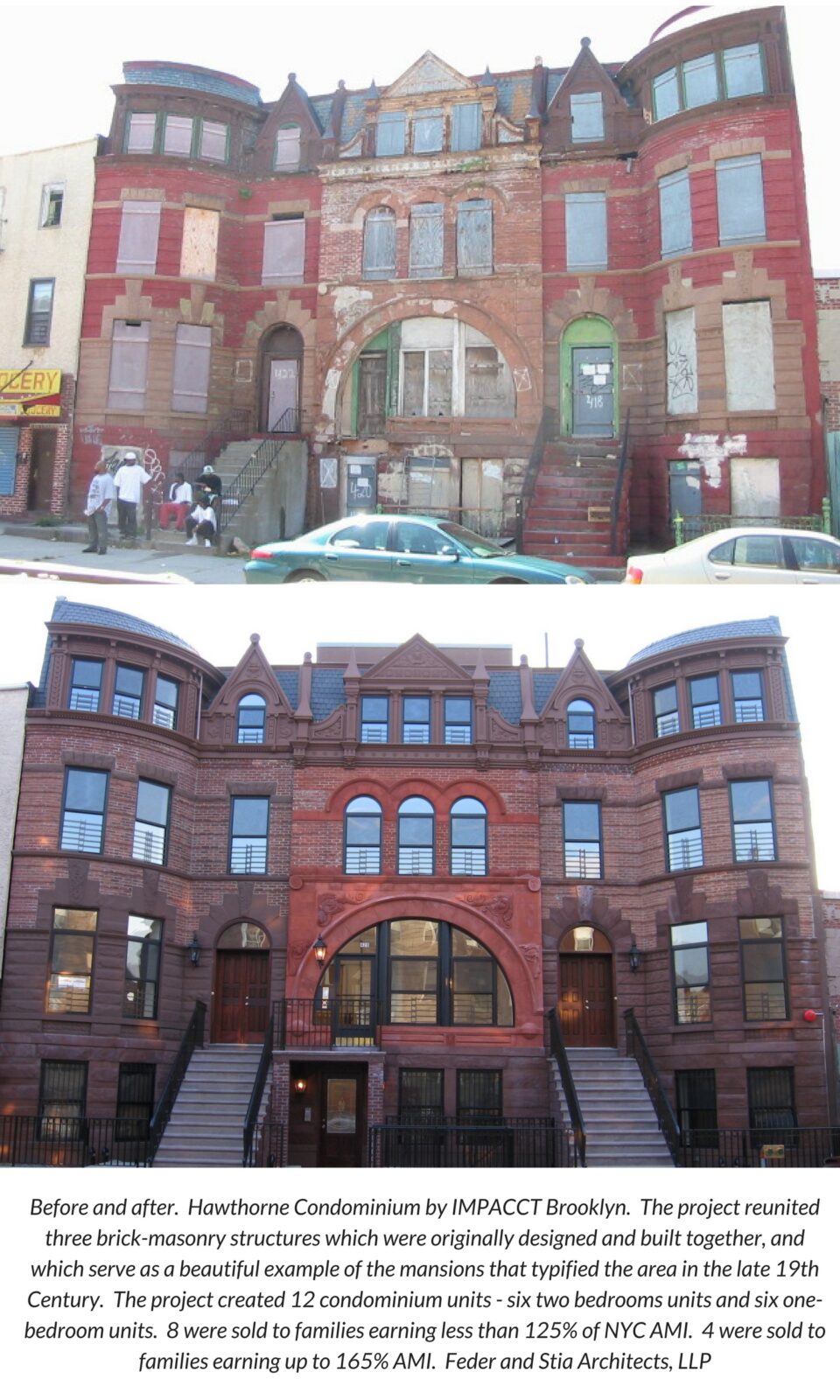 MH: When you have a project like Hawthorne Condominiums today when there is less available and affordable real estate, how do you balance what is potentially a transformative anchor project and decide what projects to develop?

KW: Let me step back and say that as you probably know, 30 years ago, New York City was the largest landlord in all of New York.  They owned so much property because of tax foreclosures and landlords abandoning their properties in the 70’s, so under Mayor Ed Koch the city started to invest in affordable housing.

So back when IMPACCT first started developing affordable housing the city owned so much property we would just get the land from the city for free, for a $1, so that made certain projects a pretty easy choice.  We got the land, the city would give us subsidies to develop the land, so that worked for a long time.

Now, what’s happened, of course, is that all those properties, all these units have been revitalized and many of the neighborhoods have become gentrified.  That includes the neighborhoods we work in.  So the big challenge we face, is how do we continue our mission of creating and preserving affordable housing when the cost of acquiring property in Brooklyn is astronomical?

What’s changed for us is that we have to be active in the market trying to find land and buildings to develop.  So what we’ve come across are churches and religious institutions.  Most of the deals we are currently working on are partnerships and joint ventures with religious institutions.  Much of our pipeline involves us working with a church or working on land that is owned by a church.  So that’s the direction we are headed. I should add that it is also more senior and supportive housing. In New York City and New York State, there is a big push where the city and state have invested a lot of resources in senior housing and supportive housing.  So right now much of what we do is senior and supportive housing on church-owned or leased land.

MH: So how much of your portfolio – what you are developing – is dictated by funding versus overall mission?

KW: In New York City we are fortunate because there are a lot of financing tools available to us, but there still is a limit to those tools, and we try to use all the tools.  We’ve used Low Income Tax Credits, we’ve used Historic Tax Credits, New Market Tax Credits.  We use rental assistance with Section 8 Federal funds.  New York City and State both provide capital dollars to build housing as well.

So we know what all the tools are and what works and doesn’t work.  But it’s all rental housing.  The one thing we are NOT doing is, we are not doing much in the way of homeownership.  At IMPACCT Brooklyn we used to develop homes for one-to-four families.  We developed condos and co-ops, but after the market crash in 2007 the city stopped subsidizing those types of projects, so we do hope that changes.

MH: Once investment starts taking off, and neighborhood demographics begin to rapidly shift, is there a way to address these changing dynamics?

KW: In my opinion, once the market takes over, the question becomes, how can we be proactive?  We do a lot of our work in Central Brooklyn and this is a rapidly gentrifying neighborhood.

That’s very difficult because a lot of the owners of these properties see dollar signs, and see that they can make a lot of money, so they would prefer to sell to the highest bidder, who would then essentially try to take the existing affordable units and convert to market rate units.  So for us to purchase those units we have to go and ask the City to subsidize the purchase.  And it’s kind of hard to beat the market.

MH: Such a good point about preserving the existing affordable units because it quickly becomes the only option.  It’s hard to beat the market!

But it is still challenging because you have to get the landlords or the property owners to sell at the appraised value. And what is happening in Brooklyn, and in these hot markets, is that the owners are getting speculators that come in and purchase these properties for prices that are above what any appraiser would value it at.  So the challenge is even getting – because the market is so hot – is even getting these sellers to sell at the appraised value which is where the subsidy comes into play.

MH: I appreciate you identifying the challenge of that tool.  Pittsburgh has been working to build up its toolkit to respond to market changes and gentrification.  What other tools might we learn from that you have seen implemented in New York City?