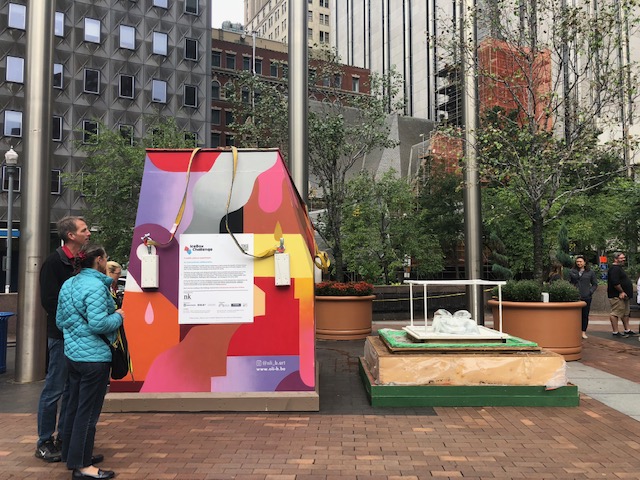 Curious to hear how 1800 pounds of ice has held up over the past four weeks in the Pittsburgh sun (and rain) while encased in two separate boxes designed to simulate conventional construction methods versus Passive House Standard?

Because of the methodology’s simplicity, passive house buildings are easy to maintain and for users to utilize. High-performance buildings remain comfortable during power outages and extreme weather and their maintenance and energy costs remain low over the long term.

The concept of the Ice Box Challenge began in Brussels, Belgium, as part of an educational campaign leading up to that city’s incorporation of Passive House into building code – any new construction in Brussels is built to PH standards.  The Ice Box Challenge scientific demonstration project has since spread across North America from Vancouver to Washington, D.C.

The boxes were designed and built in Vancouver and presented as part of the Vancouver Ice Box Challenge in Summer 2017. Stark Architects and Footprint Sustainable Hosting provided design and construction.  During the New York City Ice Box Challenge the Brussels Capital-Region commissioned Belgian street artist Oli-B to paint the boxes, creating a colorful interpretation of two alternate futures for building practice.

Each Ice Box sits tightly on its own platform. The Ice Boxes are both built with timber studs and plywood. The Passive House Ice Box is insulated with Rockwool insulation and its window is triple-glazed, according to the Passive House Standard, with Cascadia Windows. Both structures are clad in treated oriented strand board, which is painted and waterproofed.

The difference is in simple thermodynamics, says C.J. Thouret of Crux Homes, a Passive House construction company.  Thouret has been involved in the construction of Ice Box Challenges in Philadelphia and D.C. before coming to Pittsburgh for the most recent one, which was revealed last Friday, October 5th.

Click here to see the construction and results from the recent Philly Ice Box Challenge.