AE Works was recently recognized as one of the 2012 Pittsburgh 100. The Pittsburgh 100 ranks the fastest-growing for-profit companies in western Pennsylvania. A newcomer to this list, AE Works is ranked as the sixth fastest growing company. Adding to this distinction, the firm is also listed as the number one fastest growing company in their market segment, which consists of the construction, real estate, and development industry. This recognition comes on the heels of the firm’s fifth year in business and recent headquarters relocation.

The new St. Thomas A’ Becket Church, designed by Astorino, has been dedicated. The $7.3 million project includes a 750-seat worship space, parish offices, and a 100-seat day chapel. Shell space is provided on the lower level for a future social hall. Also included in the overall structure are restrooms, a bride’s room, and a choir rehearsal room. The enhanced design has increased and improved parking and traffic flow, including improved handicap availability as well as fully updated access within the new church. The project completion timeline was 19 months.

FISHER ARCHitecture will be featured in the upcoming Taschen publication “Architecture Now! Houses 3”, due out in December.

Paul Rosenblatt, AIA, principal of Springboard Design, was a guest lecturer at the Center for Architecture, in NYC, which related to his recent book, Every Building A Museum and to the firm’s approach to work.  Visit Rosenblatt’s blog to learn more.  Additionally, creative director Petra Fallaux has curated ‘scapes’ – the newest exhibition of the Pittsburgh Society of Artists – at Panza Gallery in Millvale, which is on view through October 13th. 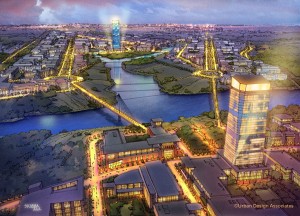 The City of Moscow has announced the winners of an international competition to design the new capital complex. The design competition, sponsored by the City of Moscow, was titled “The Moscow City Agglomeration Development Concept” which called for design submittals at three scales: the region, the city, and the new capital center.  Awards were given for the best concepts for each of the scales. The award for the federal district plan went to Capital Cities Planning Group  – an Anglo-American partnership coordinated by Urban Design Associates and lead by Beasley and Associates out of Vancouver, BC.