AE Works Ltd. (AE Works) has been certified as a B Corporation, making it the sixth company in Pittsburgh to achieve B Corp status. As a Certified B Corporation, AE Works voluntarily meets a higher standard of transparency, accountability, and performance, harnessing the power of business to solve social and economic problems. AE Works’ full B Impact Report is available to the public here.

Astorino has utilized its design-led, integrated design-build delivery method to design and construct the new Allegheny Health Network (AHN) Health + Wellness Pavilion in Wexford, which opened earlier this fall. The 174,000 sf mixed-use medical facility followed an extremely compressed design and construction schedule of just 22 months – an achievement that would have been nearly unattainable using the more traditional linear design-bid-build delivery method. The new “medical mall” will provide a one stop location for a broad array of health and wellness services for the North Hills community, including clinical and diagnostic services as well as supportive services.

BBH Design has announced that Michael Kuchera, AIA, LEED AP has been promoted to Principal in the firm. Kuchera played a key role in the development of the Pittsburgh office. Not only is he a recognized leader within BBH Design, but also in the community and profession. He serves on the Board of Directors for both the Carriage House Children’s Center and AIA Pittsburgh. With over 18 years of architecture experience, Kuchera has worked with healthcare, education, and commercial clients. 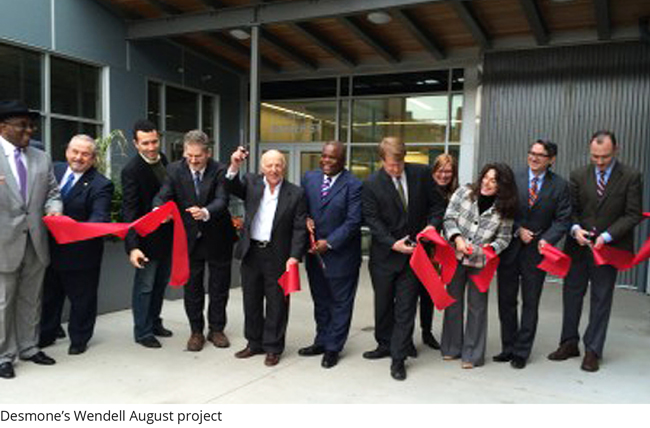 Out of over 900 entries, Desmone’s Wendell August project has been chosen by the Design Build Institute of America to receive a National Award of Excellence in the Commercial/Office category. The firm has also announced that Travis Kreidler, AIA has been promoted to Principal. Additionally, Desmone recently celebrated the official ribbon cutting ceremony of Doughboy Square Apartments with both neighborhood and city officials.

WTW Architects has been selected to design the new UPMC Altoona Logan Medical Center in Allegheny Township, as well as tenant improvements. Construction of the 90,000 sf, 3-story office building should be completed by August of 2015. The $15 million brick and metal panel building will be on the site of the former Fiore Mitsubishi Auto Center. The firm has also been chosen to design a series of upgrades for three schools within the North Allegheny School District – Bradford Woods and Marshall Elementary Schools and Marshall Middle School. Additionally, WTW Architects, in association with Grimm + Parker Architects of Calverton, MD, are designing a new high school for West Jefferson Hills School District. The firm has also hired Amy Maceyko, AIA, LEED AP to work with WTW teams designing residential projects for Oxford Development Company.