The Congress for New Urbanism (CNU) has honored Market Square Place, designed by Strada LLC, with a Charter Award of Merit for the Best Block as part of its 2014 Global Awards Program for Excellence in Urban Design. The results of the project affirm many principles of the CNU, most specifically, by treating the district as a cultural and historical resource, and by creating a livable, walkable, safe, and publicly accessible urban streetscape that reestablishes the continuity of an urban society. 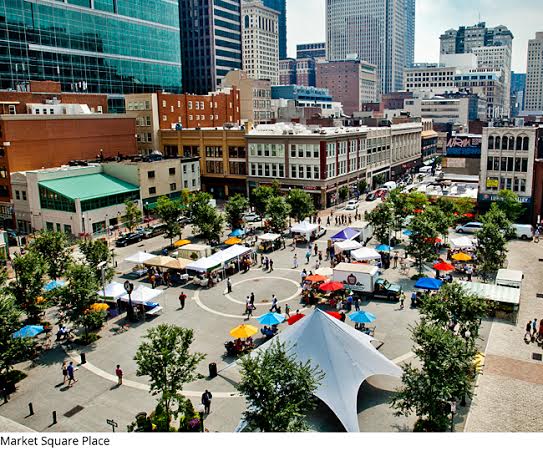 WTW Architects has teamed with Neumann Smith Architects of Detroit for a major renovation of Wayne State University’s Student Center. The 140,000 sf project features the creation of a four-story atrium as the new entrance and extensive use of glass curtain wall to allow sunlight throughout all levels of the building, in hopes of transitioning the 50 year old center into a modern architectural landmark. The firm has also been recognized for their work (with Grimm & Parker Architects of Calverton, MD) on the Bowie State Student Union by being awarded this year’s Facility Design Award of Excellence from the Association of College Unions International. Additionally, after a 13 year absence, Heather Marra has rejoined the staff at WTW. A graduate of West Virginia University, she is involved with the Wayne State University project, interior renovations at the University of Pittsburgh William Pitt Union, and the Burns White Law Firm on the city’s North Shore.