Astorino/CannonDesign has received the Engineers’ Society of Western Pennsylvania’s (ESWP’s) 2014 “Project of the Year” award in the Commercial category for the design of Allegheny Health Network’s Health + Wellness Pavilion. The original concept behind the project was to bring a range of outpatient services into the community, on a level of quality and sophistication normally found only in a hospital. Not only convenient, but because this would be a ‘one stop shop’ with all of the services under one roof, the continuity of care across specialties should be far more seamless and integrated than when transitioning between physically separate facilities. This building is the embodiment of patient-centered care. 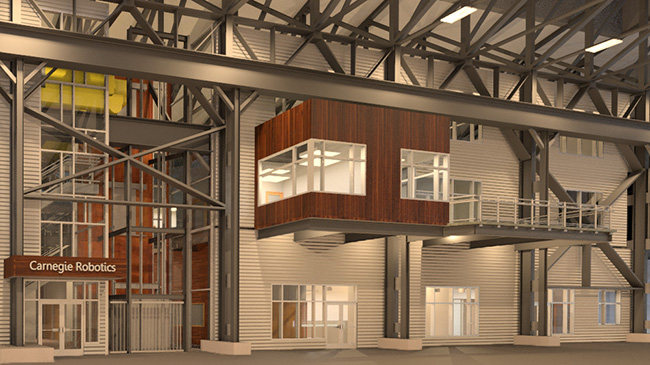 Desmone Architects welcomes Jen Bee, AIA to the firm. With a Master of Architecture degree from Virginia Tech and a Bachelor of Science degree in Interior Design from James Madison University in Harrisonburg, VA, Jen is known for her work with popular Pittsburgh restaurant brands like Blue Line Grille, Spoon, BRGR, and Burgatory. Jen’s 16 years of extensive experience with restaurant projects will further establish Desmone’s hospitality segment. Additionally, Desmone has been awarded the 2015 NAIOP Industrial Renovation Award for their Carnegie Robotics project. Also, Chip Desmone, AIA has been named the Pennsylvania Regional Representative to AIA National Board.

Roxanne Sherbeck, FAIA has retired after a thirty-one year career with Bohlin Cywinski Jackson. Sherbeck was the first woman to earn a Bachelor of Architecture from the University of Virginia. She also has an MFA in Drama, Scenic, and Costume Design from Carnegie Mellon University. Her theatrical interests significantly influenced her work throughout her career.

Phipps Conservatory and Botanical Gardens has achieved the Living Building Challenge™ for its Center for Sustainable Landscapes (CSL), a facility that houses groundbreaking sustainability research and science education programs, and serves as a key part of the public garden’s immersive visitor experience. In producing all of its own renewable energy, and treating and reusing all water captured on site, the CSL demonstrates the benefits of humanity living in harmony with nature. evolveEA managed the LEED and Living Building Challenge certification processes for the CSL project and is proud to have worked with the Phipps team as sustainability consultants on a number of green building projects at the Phipps campus.

IKM, Incorporated has announced that the following individuals have advanced to the level of Associate: Matthew Hansen, AIA; Steven Watson, AIA; and Douglas Lieb, AIA.  All three have exhibited significant skills and will be given new opportunities to lead corporate development initiatives, participate in the firm’s marketing efforts, focus on an area of firm operations, and mentor younger members of our staff.

Park Rankin has retired from his position as University Architect at the University of Pittsburgh. Rankin served as AIA Pittsburgh chapter president in 1988, a year especially notable for the Remaking Cities Conference that brought Prince Charles to Pittsburgh to discuss the potential of post-industrial regions. 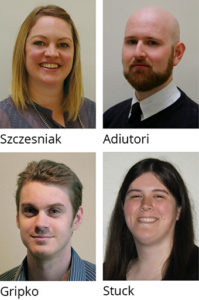 Perfido Weiskopf Wagstaff + Goettel announced recent staff additions at the firm’s offices in downtown. New Graduate Architects include Jennifer Szczesniak, LEED AP BD+C / Living Building Ambassador. Szczesniak relocated to Pittsburgh from Seattle, Washington where her work with firms on the West coast included projects for civic, higher education, office/retail, and housing clients. She also developed expertise integrating sustainability, LEED, and 2030 Challenge concepts into project design and office culture. Joseph Adiutori Jr., Assoc. AIA previously worked for an architecture and engineering firm in Harrisburg designing education projects for the Commonwealth. Adiutori earned his Bachelor of Architecture at Penn State University. Robert Gripko relocated to Pittsburgh after earning his Bachelors and Masters in Architecture at SUNY Buffalo, where he was a teaching assistant for a variety of courses for the Department of Architecture. Jessica Stuck, Assoc. AIA relocated to Pittsburgh from Albany, NY where her recent work with firms concentrated on preservation of landmark architecture including Jefferson’s Rotunda at the University of Virginia. She earned a Bachelors of Architecture and Arts in History, and a Masters in Architecture at Kent State University.

Strada has combined its expertise in historic preservation and adaptive reuse to create distinctive hotel experiences. The James H. Reed Building downtown has been converted into the Hotel Monaco, featuring 248 guest rooms, 13 suites, restaurant, rooftop deck, and grand ballrooms. Strada was the architect of record for this project along with a design team that included Gensler, Beleco Design, MARKZEFF, and Ohm Lighting. The firm is also working to convert the R.J. Reynolds’ former headquarters into a boutique hotel, the Kimpton Hotel, in Winston-Salem, North Carolina.

VEBH Architects is pleased to announce that Thomas Stanko, AIA and John Reid have been promoted to Senior Associates in the firm and that Jacklyn Dunn has been promoted to an Associate in the firm. Thomas Stanko has been with VEBH for 22 years as an architect and project manager.  He is a healthcare design specialist and is a certified by the American College of Healthcare Architects. As a project manager and architect, John Reid has designed multiple projects for Waynesburg University, including four new buildings on the campus over the past 15 years.  He has been an Architect with VEBH for 23 years. Jacklyn Dunn joined VEBH in 2002 and has has made valuable creative contributions to numerous design projects Stanko, Reid, and Dunn have made significant contributions to the creative and professional goals of the firm’s clients and they will each have enhanced responsibilities adding to the leadership of the firm. 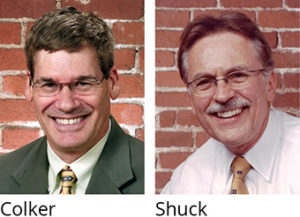 Hank Colker, AIA and Doug Shuck, AIA, two long-time principals at WTW Architects, have retired. Colker, a member of the senior management team and former company treasurer, joined WTW in 1978 and became a firm principal in 1992. A certified LEED designer and nationally recognized expert, he has conducted numerous seminars for improving the quality of campus life and “green” design at educational conferences. Shuck joined the firm in 1985 and became a principal in 1996. His projects have included recreation, financial, retail, office buildings, and university projects. Additionally, “The Yards at Three Crossings”, a LEED-rated 300-unit apartment complex by Oxford Development and designed by WTW, broke ground in December with an anticipated completion of spring 2016.