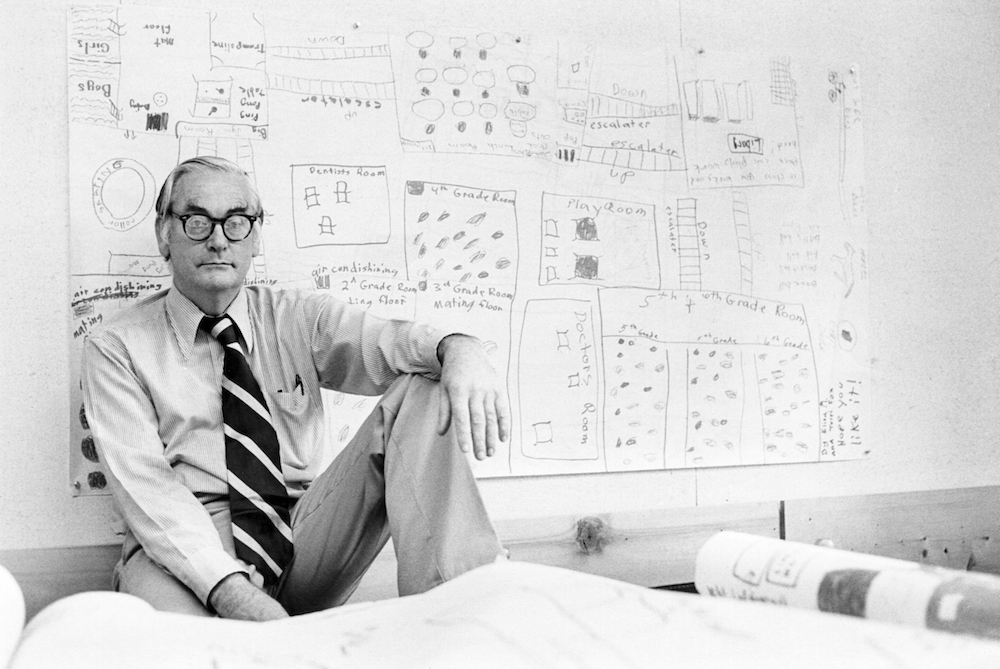 David Lewis, FAIA will give a lecture at CMU School of Architecture on November 6th which will be preceded by the premiere of a short film by the AIA: “The Legacy of David Lewis.” In honor of Mr. Lewis’ indelible mark on the built environment in Pittsburgh and the greater Mon Valley, Columns spoke to several of his colleagues about his influence on their work.

In 1963 David Lewis, FAIA came to Carnegie Institute of Technology (now CMU) as the Andrew Mellon Professor of Architecture and Urban Design. Lewis started one of the first graduate programs in urban design in which students learned to work hands-on with elected officials, agency representatives, and citizens on community design and development projects.

In 1964 Lewis founded Urban Design Associates (UDA), the internationally known and pioneering Pittsburgh-based architecture and urban design firm. When Lewis retired from UDA, he returned to teach at CMU from 1990 to 2000.

In 2007 he was a co-founder of the Remaking Cities Institute at CMU. He has received several local, state and national awards, including, in 1988, the AIA Kemper Award for service to the profession. That same year he was also honored with the Pennsylvania Gold Medal for Architecture. He chaired the 1988 Remaking Cities Conference at which HRH The Prince of Wales was the Honorary Chair and keynote speaker.

In addition to authoring books on art, architecture, and urban design, Lewis is also a painter and sculptor and has held a number of one-person exhibitions.

To learn more about Mr. Lewis check out this short film about his philosophy. 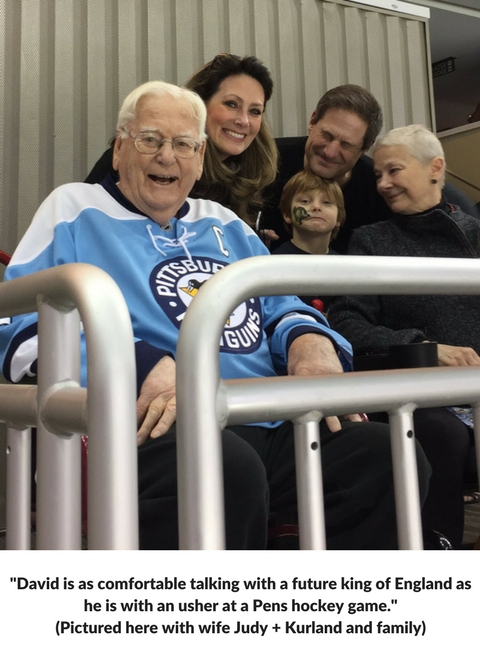 Many know David Lewis as a world-renowned urban designer and artist. His work, art, and friendships span many decades and continents. I have been fortunate to know David as a colleague and friend for over 20 years.

David taught me the importance of drawing from one’s past experiences, big or small, and applying these to how we think, design, and make decisions for ourselves and our communities. David’s fascinating and often humorous stories about his grandparents, life in South Africa, friendships with artists in England, and journeys in academia, practice, and community engagement serve as lessons for us all.

David is as comfortable talking with a future king of England as he is with an usher at a Pens hockey game. Our shared passion for local sports has shown me that David’s love for Pittsburgh is as real as it gets. His commitment to communities like Homestead, PA is truly impactful. And just when you think you know David, he will tell you another story about a faraway place or time, make you laugh, and end it with “Stick around…” David, we hope you will stick around for many years to come. 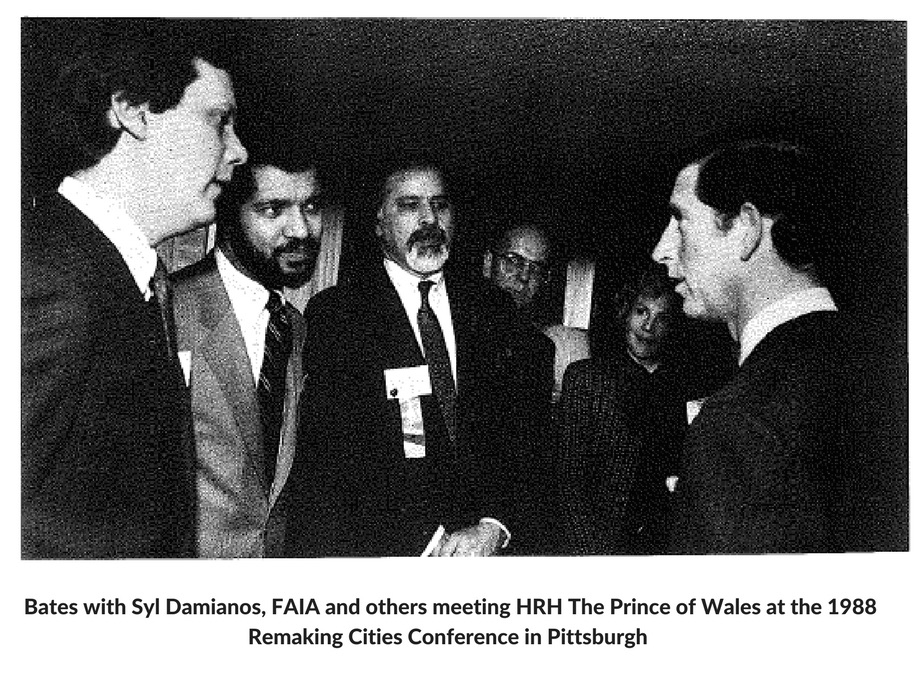 David has been a mentor to me for the past 30 years. We worked closely together on the Remaking Cities Conference which was my first experience with a Regional Urban Design Assistance Team Project (R/UDAT).

After that, I worked on the AIA Pennsylvania Board on a series of R/UDATs across the state with funding from the DCED. We addressed economic development in distressed communities such as Hermitage, Aliquippa, and Bethlehem.

David’s urban planning work which focuses on “community engaged design” has influenced the revitalization of the entire Mon Valley. He has almost single-handedly shored up Homestead, PA with his R/UDAT efforts as well as his personal investments in the city’s business district.

His firm’s community pattern books have influenced urban rehabilitation across the nation. He takes his work seriously but has a great sense of humor. 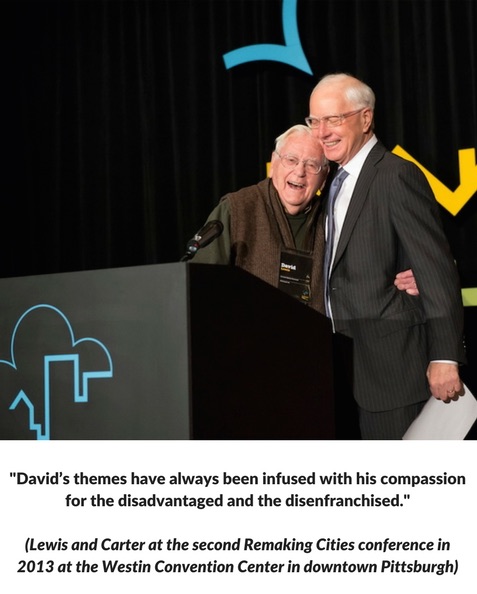 As a new employee at UDA in 1973, I was mentored by David in the art of public participation and he instilled in me the value of the inherited physical an social fabric of every city where we worked.

David is a true Renaissance man. Not only has UDA and David had a major impact on projects in Pittsburgh but David’s community leadership in Pittsburgh and Homestead has been transformative.

Add to that his late-life career as a painter and a sculptor. David’s themes have always been infused with his compassion for the disadvantaged and the disenfranchised. David chaired the 1988 Remaking Cities Conference in Pittsburgh. He was able to secure Prince Charles to be the Honorary Chair and Keynote Speaker. That was a big event for Pittsburgh. In October 2013 a second Remaking Cities Congress was held. Attached is a picture of David and me at the podium in 2013 at the Westin Convention Center Hotel in Downtown Pittsburgh. Neither conference would have been possible without David. The photo captures the fulsome spirit of David — a larger than life, and full of life, personality, now 95 years old. 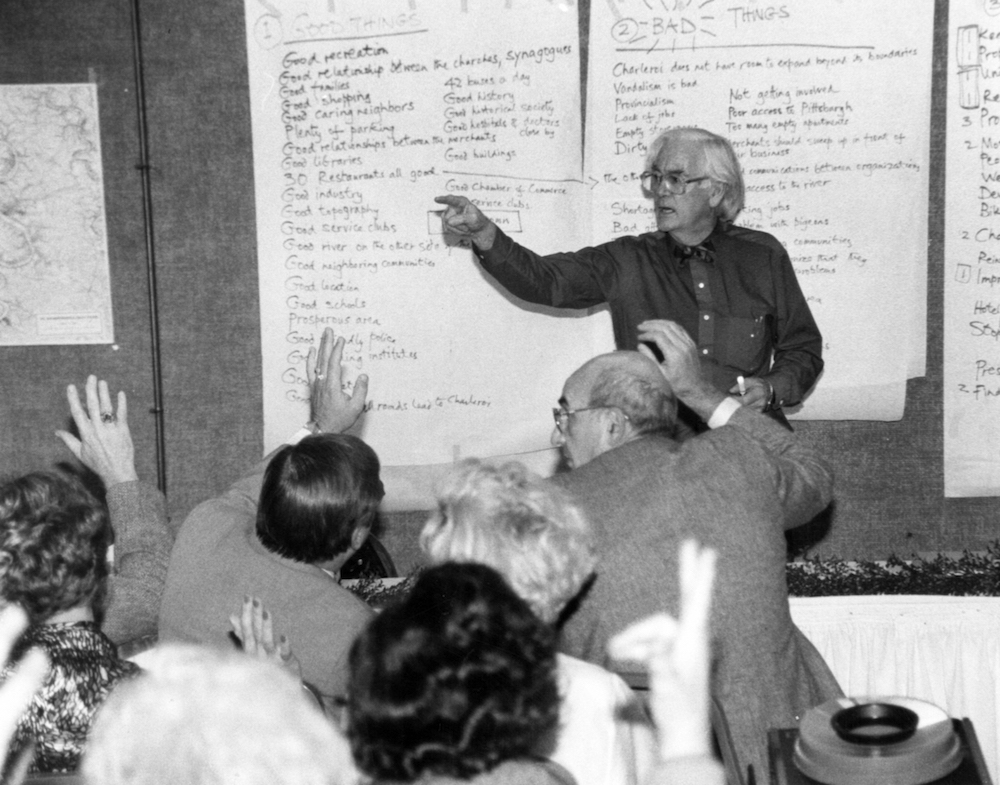 David’s approach to urban design and architecture has fundamentally shaped both my firm, Studio for Spatial Practice and my 15 years of teaching at CMU.

David’s studios never began with a program, instead, they started with an investigation of people in a place, attempting to understand their history, social and economic dynamics, and material practices. From this understanding, he would ask us to propose design interventions constructed around social needs and everyday life.

Projects were about helping people, but also about building social networks and cultures through architecture. He also had a fundamental belief in participatory design and actually listening to people first. At the same time, David always positioned architecture within the arts, as creative artistic practice, albeit a social one. As a student, this shaped my approach to urban design, and later as a colleague and one of the inheritors of his legacy at CMU, I have worked to build on his approach through our Master of Urban Design program and in my own urban design studios.

David saw architecture and urban design as a form of social practice grounded in the larger context of the arts. In his urban design theory course, he would leap from the Baroque axial planning of Rome to the studio of Constantin Brâncuși, to the social history of the Mon Valley.

Through his practice at UDA, David created a professional space for exploring socially responsive architecture and urbanism. This approach has shaped the many practitioners in Pittsburgh that have passed through UDA, myself included. UDA was one of the few places in Pittsburgh to work if you wanted to think critically about the city. Many of its alumni have gone on to incorporate this approach into their own work, many as principals of Pittsburgh firms.

David also shaped the community and built-environment activism in Pittsburgh, directly and indirectly. The GroundZero Action Network, an art and activist collective, grew in part out of David’s influence and at times participation.

It was around David’s skinny dining room table that we created a multimodal transportation alternative to the Mon-Fayette Expressway, the Citizen’s Plan. While only partially successful, this activist effort changed the conversation in the city about transportation. Finally, David has provided all us practicing in Pittsburgh a constant example of pursuing both architecture and art, with his constant stream of drawings and sculptures.

2 thoughts on “People Are the Foundations of Cities”