On the evening of Sunday, October 19th, the Green Building Alliance and the Design Center of Pittsburgh organized a Community Forum at WESA-FM on the South Side with guest speaker Gil Penalosa. Penalosa is the former Commissioner of Parks of Bogotá, and now Chair of the Board at 880cities, a Toronto-based non-profit organization. The goal of 880cities is to promote walking and biking as activities, and urban parks, trails, and other public spaces as great places for all. Penalosa was in our town to be the keynote speaker at the APA-PA Chapter 2015 Annual Conference. Irina Zhorov from WESA interviewed him during the Community Forum. 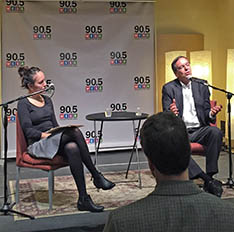 Penalosa started with a summary of the troubles of contemporary cities, and the global desire for healthier communities with happier citizens. The hope of 880cities, for example, is to create urban environments that can be equally welcoming for kids and senior citizens (“from 8 years old to 80 years old”) in which pedestrians are at the top of the urban pyramid. The first sentence that really captured my attention, drained by a busy weekend, was “It’s not about the money”. Considering that the majority of people (and architects) are struggling with budget reconciliations, the statement was pretty outstanding, if you consider that we are talking about changing entire cities. Penalosa explained that to make a big change in our urban environment, it is a political issue. He experienced that first hand when working as Commissioner of Parks with his brother Enrique Penalosa, mayor of Bogotá from 1998 until 2001 (1).

To make a city great you need a holistic approach and a project in which the financial aspect is part – but not the main component – of it. Penalosa is credited with many changes in Bogotá, achieved with very little money and often without full consensus.

Penalosa has a very friendly and outgoing persona, but when it comes to urban planning, he shows a practical and goal-oriented side. It is with this determination that he obtained  results, winning many urban battles. He acts as a planner and speaks as a politician: “Citizens elected you to take action. General interest should always win above any particular interest. (…) Change is hard, and it is not unanimous, (but) don’t take no as an answer. Do whatever it needs to obtain the right results for everybody. And do not care about what people write in the newspaper!”

One of the first questions asked was how to integrate big infrastructures and many roads, as Pittsburgh has, without compromising the walkability. “For decades, we have shaped our cities after the car,” he says. “Now it is time to change this logic, even if not everybody thinks so. We have no alternative.” When asked if a “if-you-build-it-they-will-come” approach would be enough to make the change, Penalosa says that that approach is not enough. “There is no city where good projects are not used, but some people are particularly scared by change, and will oppose the positive change, nevertheless”. Thus, you cannot simply disregard the people, you need to collaborate with them in making the change. He also adds that a good idea is sometimes partially implemented or has gaps in the management, but positive change cannot stop just because of glitches. There is no alternative in our cities, as we need to be more sustainable. We must make positive change happen, and keep trying until we succeed.

When asked about addressing how to engage people who don’t want change, Penalosa explains what has worked for him: “Do honest consultation with people. Make meetings that are easy to attend, for time and location. Make sure to reach the right targets in the population: all the ages. Listen, listen, listen!” Penalosa says there are three phases of understanding a city’s needs: WHAT is missing, HOW it is wanted, and WHICH project is necessary to achieve the goal. “Only once you understood those do you call the architects.”

A possible way to make inclusive cities for citizens is trying to build fun cities. Quoting the example of Central Park in New York (Penalosa mentions the Big Apple many times, to provide both good and bad examples of urban planning) he aims to increase the number of public spaces and parks in particular. These should be accessible at any time, and safe for everybody. “People hate each other if they don’t have a chance to know each other. We should provide more places for interaction, for letting people get to know each other”. A precious suggestion he gave is to involve elder citizens, retired, with time and knowledge to share with younger citizens. The numbers show that the First-World population is globally aging, but it is also healthier than in generations past. We should consider this population as a great resource.

Thinking of Pittsburgh, I asked what to do when the integration is not an infrastructure problem, but rather is rooted in decades of wrong urban renewal practices, which have left scars on the community, fears, and trauma (2). Penalosa acknowledged the problem, underlining that in many cities, certain neighborhoods actually have lower life-expectancy. A segregated city is not only a social defeat, but can have unhealthy outcomes for the people living in specific areas. The solution, according to Penalosa, is again in the public space. There are many positive things that we can do on a small scale to impact a neighborhood: new sidewalks, new guardrails, new parklets reclaimed from empty lots. Linear parks, connecting areas, are highly recommended by him. Public spaces should be free, safe, and accessible. Good design can help in achieving these goals, more than a generic amount of money not backed-up by a solid plan. The program for public spaces is the most important tool. It is again not about the money, but about the management and the politics.

At the end of the talk, he gave some recommendations for Pittsburgh, starting with the fact that Pittsburgh should be more active. The city should not be satisfied with the prize for being “the most livable city in the USA.” We’ve moved from bad to good, but now it is time to move from good to great; there is much more to do. Along those lines, we should invest more in the city, in its image and maybe even a brand. We should make it more and more attractive. People should really “love to be living and working in Pittsburgh”. He also addressed the common grievance of weather, stating that the Pittsburgh winter is not the problem. The problem is when you design for 60 days of bad weather, instead of the other 300 days. Bad weather is a psychological issue, the city should focus on its real problems. Finally, non-local architects coming here to design projects is not necessarily bad, provided they really connect with the population to understand the real problems. On the contrary, it is not immediately guaranteed a local architect would do so.