The Architects of Healing

Recognizing the designs, and designers, who have memorialized 9/11

In each lifetime, it seems there is an event, often some tragic happening, in which time stands still.  From this moment we can focus our lives, pinpointing our exact location and reaction. We refer to life pre- and post-event. For many, including my parents, the first such tragedy was the assassination of President John F. Kennedy. Who among us has not viewed the famous Zapruder film that so graphically captures those fatal few seconds? At the time, a home video was still a rarity; technological advances have made witnessing such moments a common occurrence.

I can still recall watching the live broadcast of the fall of the Berlin Wall, as people scrambled over that which had been a symbol of fear and tyranny for decades. Just a child, sitting on the floor of my grandparent’s living room, I had no way of comprehending the magnitude of what was happening right before my eyes.

Twelve years later, just days after moving from my hometown to a new city, several states away, I was awakened by a phone call telling me to turn on the news.  Having no television, I quickly turned on the radio and sat on the floor next to it, stunned, as I listened to the live broadcast of the attacks on the World Trade Center.  Needless to say, the rest of the day was a haze, wandering the streets of my new neighborhood, finding a coffee shop with a TV, watching the tragedy that had already happened on loop. Even though I knew how it would end, the visual footage was a slap to the face.  While I think of September 2001 as the beginning of my life on my own, it will always be tied to what happened on the 11th, and as I slowly acclimated to that new life, those moments on that sunny Tuesday morning had a constant and lasting effect on how life was being defined and redefined as the country and the world reacted to the terrorist attacks.

Last year, on the 10th anniversary of 9/11, the National September 11 Memorial was dedicated at Ground Zero and opened to the public the next day.  This year will hopefully bear witness to the opening of the 9/11 Memorial Museum.  The past decade has encompassed shock, anger, and fear. It has also included a very public design process that brings us to the present day, with the creation of a place to remember and mourn but also to heal. 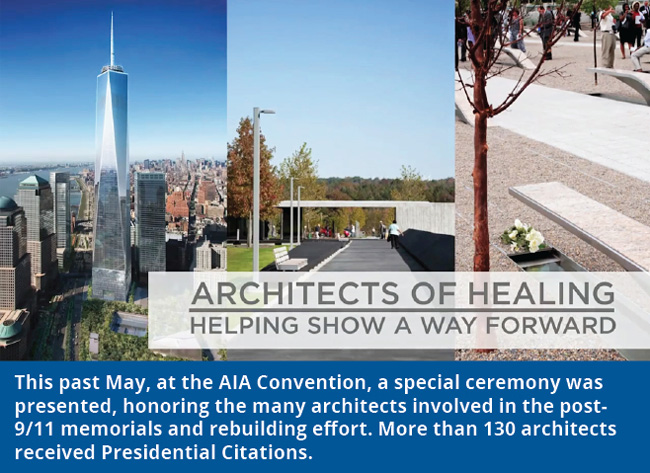 This past May, at the AIA Convention, a special ceremony was presented, honoring the many architects involved in the post-9/11 memorials and rebuilding efforts, not only in Manhattan, but also at the Pentagon and at the site of the Flight 93 Memorial. More than 130 architects received Presidential Citations.  During the ceremony, several architects recall those tragic moments and what inspired them to step forward.  The AIA has captured the entire Architects of Healing Ceremony.  Below is the first of nine videos, in which AIA CEO Robert Ivy, FAIA recounts his experience being in New York the morning of the attack.

Closer to home, Flight 93 crashed into a field just minutes from Shanksville. Pennsylvania.  The only planned attack that was unsuccessful, all 44 passengers of the flight were killed upon impact.  10 years later, the first phase of the Flight 93 Memorial, designed by Paul and Milena Murdoch, was dedicated.  Click here to watch “Designing the Flight 93 Memorial”. 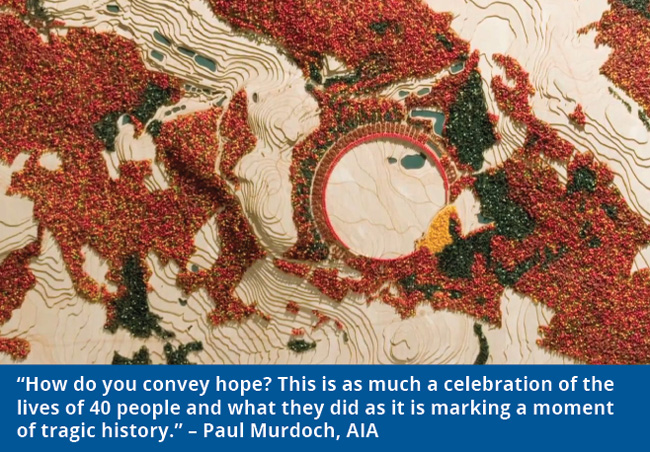 The subject of 9/11 will always be rife with emotion.  Thousands of lives were lost and a country was deeply shaken.  The issues and memories discussed within these videos are understandably solemn but are also filled with a strong undercurrent of hope, as some of the major designers and organizers involved in rebuilding give an in-depth look at their reactions to the tragedy and their role in creating a space of remembrance and healing for millions.