A Collaborative Event Comes to Pittsburgh 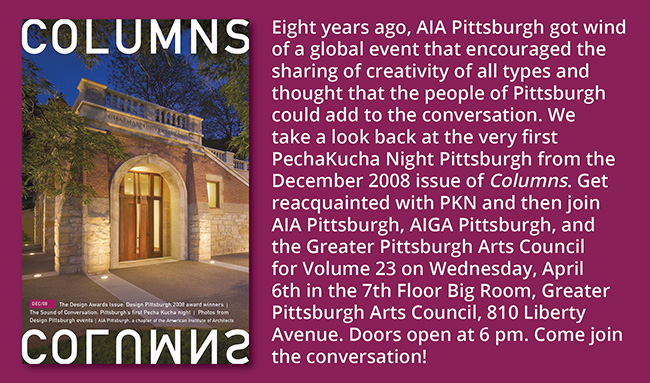 When AIA Pittsburgh first learned of this global event with the hard-to-pronounce name, the office knew it could be a great opportunity for the region’s architects and designers. But it turned out to be much more.

Pecha Kucha. Pay-cha Koo-cha? Pee-ka Kah-cha? No, no, no. Pecha Kucha Night (pronoucned pay-chalk-cha) was devised by Astrid Klein and Mark Dytham of Klein Dytham Architecture in Tokyo. It was an event conceived as an informal place for young designers to meet, network, and show their work to the public. The idea is that each presenter is allowed to show 20 images, with each image shown for just 20 seconds — 6 minutes, 40 seconds to talk about work, art, ideas, and then the time is up. This format has tapped into a demand for creative people across the globe. Since the first Pecha Kucha Night was held in 2003, the event has spread virally all over the world, with more than 140 cities now participating in this format. Pecha Kucha — which is Japanese for ‘the sound of conversation’ — not only gives architects a chance to share their work, but has also included designers, painters, photographers, musicians, performance artists, and more. 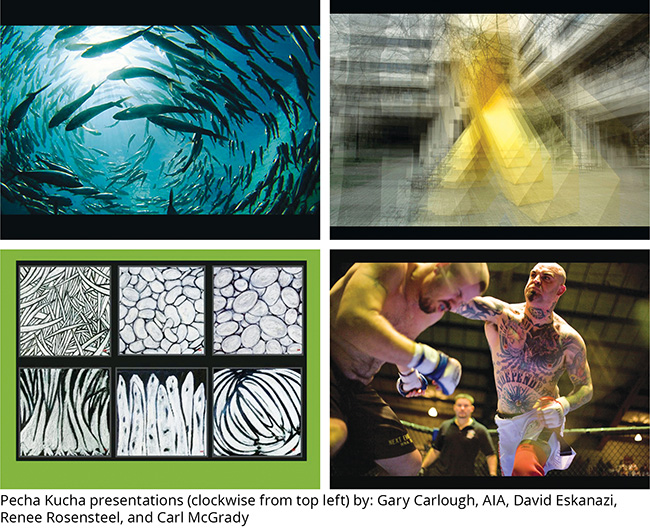 AIA Pittsburgh learned of this event through a member of the chapter who brought a magazine article about Pecha Kucha into the office to share. It sounded like a great idea, one which the organization hoped would bridge not only the different generations of architects, but also bring together a wide range of creative people from the larger arts community. After much research, it was decided that, October — the month of Design Pittsburgh — would be the perfect time to introduce this creative conversation to the city of Pittsburgh. A committee was formed to help guide the process, headed by Dutch MacDonald, AIA of MAYA Design. Also, AIGA Pittsburgh — the society of design — was brought on board as a partner.

Meetings were held and ideas were exchanged. Having never done this before, there were a lot of unknowns. Would anyone want to participate? Would anyone attend? To spread the word as far as possible, the members of the committee tapped into their own contacts and resources, sending the Call for Presenters to as many people, organizations, communities, and schools as possible. Fingers were crossed, and all that could be done was to wait.

Slowly, responses started to trickle in. An architect, Rob Pfaffmann, AIA, was one of the first. Then a painter, and another, and another. Over the course of four weeks, 16 proposals were sent in, each uniquely its own. Each emailed response brought with it a sense of excitement, and that excitement would last right up to the evening of the event. AIA Pittsburgh had also started to realize that there was some interest from the public. Throughout October, as the event was being advertised, phone calls would be received almost daily in which the caller would ask about an event they had read about and then pause as they tried an attempt at pronouncing ‘Pecha Kucha’. 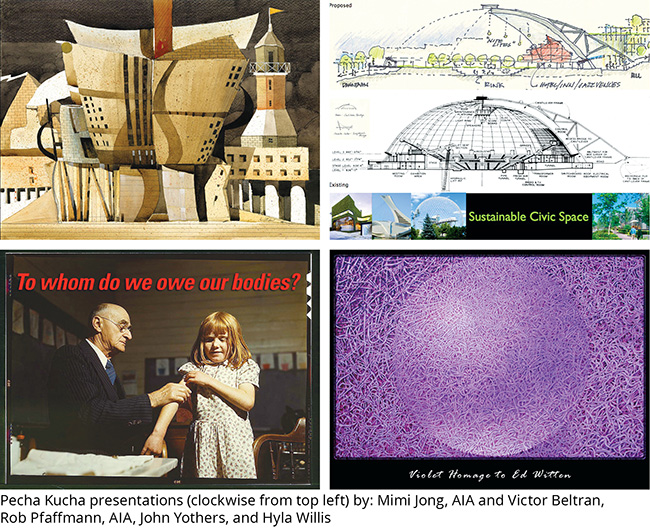 A quick run-through the evening before helped calm some nerves, but not all. Dutch MacDonald, AIA, who had been instrumental in organizing the event, had agreed to MC the event. The artists were asked to show up early, to be given a pep-talk and the order in which they would present. The slides were in order, a sea of chairs lined up facing the projection screen, and everyone stood around, waiting for Pittsburgh’s first Pecha Kucha Night to get underway.

A handful of people showed up, then more people, until a steady stream was flowing into the space. A crowd had materialized, a large, attentive crowd that filed into the rows of seats and eagerly awaited to find out what this event with the odd name was all about. The microphone was switched on, and with that, the conversation was started. Each presentation was incredibly different, with some presenting ideas, some presenting painting, photography, installations, architecture, life. An intermission halfway through created a chance to interact with the various presenters, and the feedback that was heard helped create a sense of accomplishment — everyone was enjoying themselves! At the end of the night, everyone who remained had nothing but positive words, asking when the next Pecha Kucha Night would be held.

AIA Pittsburgh and AIGA Pittsburgh have one successful Pecha Kucha Night under their belt, but look to expand and enhance the conversation. Now that the community has a better idea of what exactly it is, hopes are high that the next event will be even better, pulling artists and creative-types from all corners of the city. Interested or know someone who might be? Contact AIA Pittsburgh at 412-471-9548 and ask to be included on our future mailings for Pecha Kucha Pittsburgh. 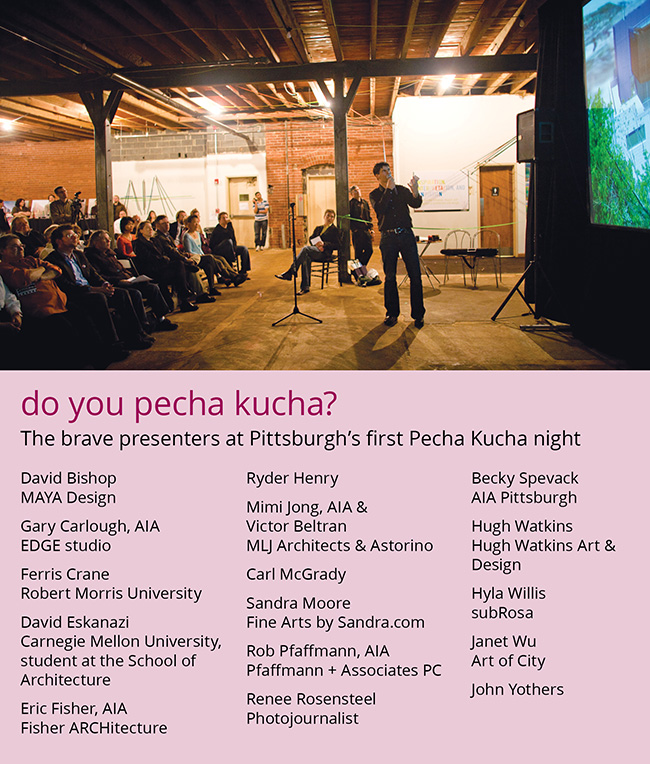