Throughout the history of Columns (in print and online) AIA Pittsburgh has documented the issues surrounding riverfront reiteration and development. AIA members have played important roles in the work and have served to foster public understanding of the importance of our riverfronts. Here are some highlights from our coverage over the years.

“Pittsburgh is a water city…. Anyone would think we loved our rivers. Yet I can think of few cities which treat their waterfronts with less respect than we do…. Look at the river banks. Discover an essay in neglect and unexploited opportunity…” The year is 1990, and David Lewis, FAIA has a lot to say about the state of Pittsburgh’s riverfronts. He is rightfully appalled at the condition they are in, but hope is in sight. The city had recently developed “The Plan for the Pittsburgh Riverfronts”, to guide the evolution of the 35 miles of shoreline. Some initial development was beginning on Herr’s Island, as well as along the Monongahela at the Pittsburgh Technology Center.

The initial meeting of the Riverlife Task Force took place in August of 1999. A group of 40+ participants were invited by Mayor Tom Murphy to be part of the design process to reclaim the riverfront. “The waterfront serves everyone and will be a focal point for life in this area,” Lisa Schroeder pointed out during these early stages. If success was measured by the broad range of people attracted, the Riverlife Brainstorm session (last June) was a smash, reports Columns. It brought together artists, rowers, and ecologists, tugboat operators and speedboat owners, athletes, business owners and neighborhood representatives, to name a few. If the common interests in activating and beautifying the rivers is a driving force, then a healthier, livelier, and wholly unique Pittsburgh will be the result.

By 2003, the Riverlife Task Force was working towards connecting the loop of the early stages of the Three Rivers Park – 6.5 miles of waterfront at the confluence of the three rivers. While it was a huge undertaking and involved many balls in the air at once, juggling volunteers, committees, forums, fundraising, multiple sites and shorelines, Schroeder was able to remain unflaggingly optimistic. “What keeps me going is how much people care about the rivers, how desperately they want to get to the rivers.” 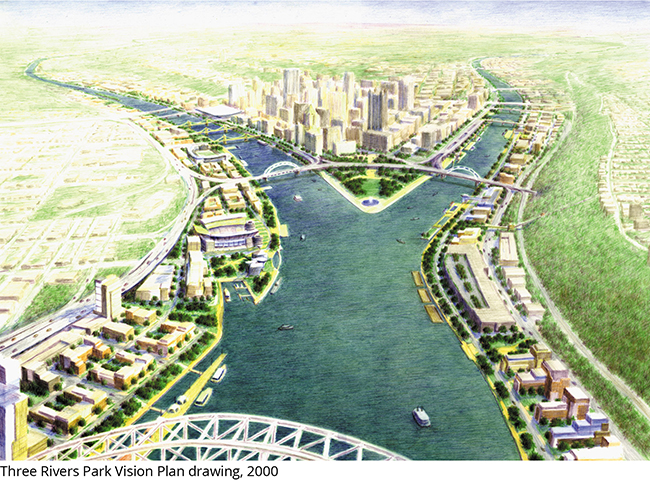 Skip ahead another decade, and Three Rivers Park – a vision of 13 continuous miles of riverfront parks and trails – is 80% complete. Riverlife has long established itself as a force, fighting to reclaim, restore, and reconnect Pittsburgh’s rivers and the people that utilize them. Many of the pieces have been completed, with new sites and projects underway. In 2012, Schroeder was chosen as AIA Pittsburgh’s Gold Medal recipient for her contributions to the development of this vision. While her energy and enthusiasm for this city and her belief in its potential will be missed, we are grateful for the many years she has called Pittsburgh home, and in so doing, has helped make it a better, more livable city for all. 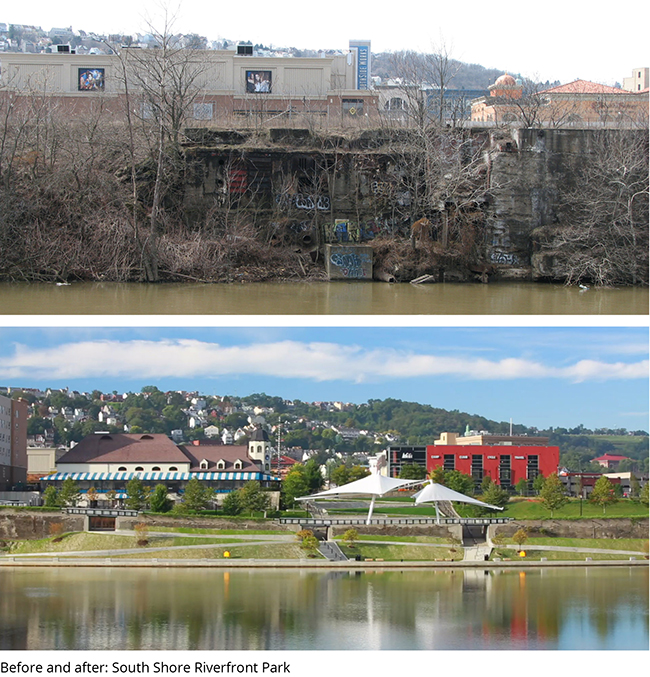 “Cities and regions are fraught with challenges, and great cities and towns are built on the shoulders of deeply talented people.  Pittsburgh was faced with an opportunity to build a park that is symmetrical with the ambitions of a world-class City and Region.  Pittsburgh was lucky to have Lisa Schroeder to lead Riverlife Task Force from a fledging advocacy group into a fully-functioning organization that is deeply entrenched in implementation of major civic open spaces.”  -Eric Osth, AIA

“When I arrived in Pittsburgh in 1982 I was amazed that there were so few public or even private amenities related to the Three Rivers. When Riverlife was instituted about a decade later, it was such a refreshing energy, using inclusiveness and enthusiasm to create a rich park, an outdoor living room, for a city that deserved better than the exploitive industrial legacy bequeathed by the 19th and 20th centuries. I was especially impressed that Riverlife valued good design and public input as a part of the equation to both capitalize upon and improve the quality of the unique urban fabric in Pittsburgh. Lisa Schroeder has been the perfect shepherd for the effort!” -Roxanne Sherbeck, FAIA