The first time I viewed Seth Clark’s work, the intern architect in me felt threatened. What loss and shame in all of these collapsing architectures! Clark’s collages, though, are too mesmerizing to be dismissed that easily, and I couldn’t resist that attractive pull of something that scared me. I decided to learn more and set up an interview with Clark, who has been named the Pittsburgh Center for the Arts 2015 Emerging Artist of the Year. I started with a joke about the fact that, initially, he could be seen as a nemesis of architects, and believe it or not, that broke the ice. While also working as a graphic artist, his installations and collages focus on collapsing buildings and deteriorating architecture. He sees “an inherent honesty in the face of his subject”.

Roland Barthes once wrote: “architecture is always dream and function, expression of an utopia and instrument of a convenience” [1]. Clark’s work is all about waking up from that dream, to focus on reality. He says there is an innate quality in collapse and decay. There is thoughtfulness.

People respond to collapse – physical or spiritual – in different ways. A reaction of some sort is inevitable; we are led to hope for permanence on this Earth, but the sight of collapsing manmade structures tells us otherwise. In Barthes’ metaphoric speech, as architects, we wish our work could stand forever (our dream). More likely, it will fail (the alarm ringing in the morning). Clark, though, suggests that this can be as equally dignifying as the success and permanence of popular monuments.

Clark gets his inspiration from buildings in Pittsburgh, such as abandoned row houses. He loves the richness of material the city offers. He is very conscious of natural disasters, recent and historical, like the Johnstown Flood (1889) which has provided the inspiration for many of his pieces. When asked if he had ever felt inspiration from the collapse of the Twin Towers, he said that he doesn’t want to get political. Not yet, at least. His focus remains on representing this universal concept of collapse, leaving the reading of it to each of us. 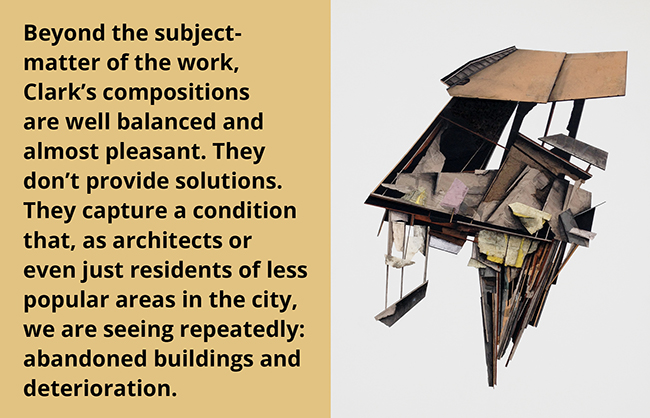 Beyond the subject-matter of the work, Clark’s compositions are well balanced and almost pleasant. They don’t provide solutions. They capture a condition that, as architects or even residents of less popular areas in the city, we are seeing repeatedly: abandoned buildings and deterioration. His technique is powerful and mastered: the collages are hyper-realistic, but also composed in a surreal manner. It seems as though he is well versed in capturing the fourth dimension of time (and for those who saw the movie “Interstellar”, he definitely captures the fifth dimension: gravity). He layers the pieces of the collage in the same way time layers events on buildings. Clark has respect for such events; the honesty of the collapse is all about revealing the guts of the buildings and, by osmosis, the personal stories of the people who inhabited them. Honesty is also in the dirt, Clark says, that covers the architectures as time passes. These collages are truthful in the way they show a chaotic state of the building. Clark’s skill is mastering the art of collage, in order to tell us the story of this collapse. It’s a post-apocalyptic world, but we still recognize the traces of human presence. This is an example of Anthony Vidler’s architectural uncanny [2]; we recognize a common and domestic situation, but we are unsettled by the disturbing context.

Many things can happen to a building over time (and the book “How Buildings Learn” [3] is a great read on this topic). Restoration removes the evidence of the passage of time, selecting a specific moment in time. That iconic moment is a convenient way to solve the complexity of history. Restoration is to buildings as a facelift is to a woman who wants to look younger. Conservation, on the other hand, steps back from an a-priori selection. It is acceptance of whatever happened to a building. Conservation prevents further degradation of the structure, but leaves the building otherwise the same. (A fact that often annoys clients who are not ready for the truth.) 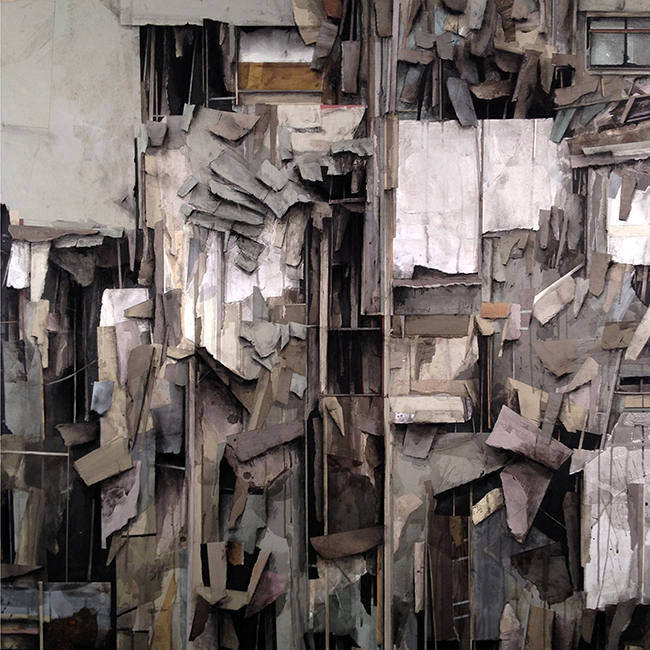 Clark’s collapsing buildings can teach us to look at the buildings around us with new eyes. They can educate us in focusing on the materials and the honesty of history. It is a lesson on the ethics of architecture, rather than on the aesthetics.

Pittsburgh has plenty of old structures, some collapsing, others just neglected. Buildings are like the face of a city. As architects, we should take care of them and try our best to be honest when interacting with them. We should provide a second life for them, and not a new, or younger, face. Pittsburgh is beautiful… we have the moral duty to respect it and pass it on to the future generations. Hopefully, we will do that before losing more historical structures (and providing Clark with further sources of inspiration).

If you want to learn more about Seth’s work, you can visit him in Radiant Hall Gallery (Lawrenceville) and online at http://sethsclark.com/.  As the 2015 Emerging Artist of the Year, Clark’s collage and sculptural works will be on exhibit at the Pittsburgh Center for the Arts from August 21 – November 1, 2015, with an opening reception on August 21st. He’s definitely an artist to keep following.