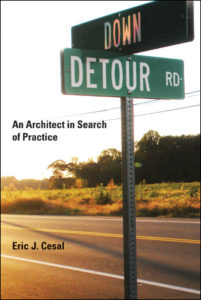 Much has been made in recent years over the graying of the profession, and how the AIA must find a way to engage and encourage younger professionals in order to rejuvenate architectural practice.  The Baby Boomers are expected to begin retiring in droves; projections for the next ten years have shown that for every one Gen-Y member that enters the workforce, as many as five Boomers will leave it, taking their knowledge and experience with them.  In other words, the size of our workforce – and its collective knowledge – is shrinking dramatically.  The AIA has dubbed this “the Associate Crisis,” as if identifying the problem and giving it a name will somehow lead to a solution.  Eric Cesal’s plight would certainly say otherwise.

Cesal is the author of Down Detour Road: An Architect in Search of Practice, which has become something of a modern-day manifesto for the architectural profession.  After pursuing several advanced degrees, Cesal graduated from architecture school into an uncertain world, one where no job opportunities presented themselves.  His career path took both a literal and metaphoric detour; he was forced to deal with perpetual unemployment, finding himself contemplating exactly what to do with this newly-minted degree of his.  His is the story of countless others that have found considerable difficulty entering the profession.  He may not have expected it, but in doing so, he has become the voice of his generation, earning himself a legion of fans.

One of those fans is Larry Speck, FAIA, professor (and former dean) of architecture at the University of Texas at Austin, and principal at Page Southerland Page in Austin, Texas.  In his “Connecting With the Next Generation of Leaders” presentation at the AIA Grassroots 2012 conference, Speck drew heavily upon Cesal’s text, calling him “equal parts profound and naïve,” and “an eloquent spokesperson for this generation.”  Indeed, much of the public discussion at Grassroots (Cesal was on-hand for a book-signing, and I counted no fewer than two dozen references to the book in the various lectures and presentations throughout the course of the week) were centered around not just the text, but also the circumstances that influenced it.

Cesal’s writing style is as equally prosaic as it is laid-back, humorous as it is serious.  The chapters are short, some only a few pages, alternating between well-researched prose and anecdotal insights into the practice of architecture (where he compares it to a forgotten fire extinguisher, the mysterious woods behind his parents’ house, an abscessed tooth… and a pet rock).  He spends a great deal of time searching for the value in architectural design; Cesal posits that architecture suffered so much in the recession because the general public finds difficulty in perceiving value in our services.  His thesis is that if our profession is to survive, it needs to find new ways of bringing that value back to architectural practice.

Cesal asks his readers to redefine good design, where “doing the right thing is more lauded than doing the new thing.”  As Speck put it, the old way used to be “pristine spaces with no occupants to screw it up,” worthy of magazine covers.  Cesal calls for the profession to embrace an architecture where “every inch matters… [where] every corner of the built environment matters.”  To do so, we need to stop stargazing, placing starchitects on a pedestal where “the emphasis on a few iconic individuals has hurt our profession.”  Instead, we need to become more collaborative, more cooperative, and recognize that “an individual victory for one architect is a victory for architecture.”

Ironically, Cesal might have already found more notoriety and success as an author, writing about being an out-of-work architect, than he might ever find in architectural practice.  His passion for architecture is quite clear in every passage that he writes; as Grassroots has proven, he has become a “household name” within the profession, albeit one known not for his built work but for his written one.  In a sense, he has also become what the increasingly graying profession fears most – a talented and ambitious young architect, forced into an alternative career by the economic downturn where, thanks to his success, he may never return.