This was originally presented as a lecture hosted by Pittsburgh History & Landmarks Foundation, and subsequently posted to Fisher BLOGitecture. This has been edited and reposted with the author’s permission. 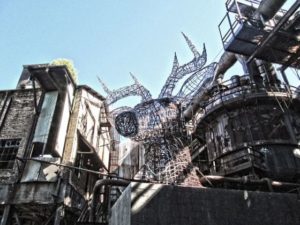 I’ve been thinking about the following idea I presented in a previous post, Reimagining Pittsburgh: Only by carefully studying Pittsburgh’s existing context may an architect design new forms for it.  I’m now of the opinion that that not only is context important when you are coming up with the project ideas, it is also important as you design and build the project.

There are different ways to take action. There’s the kind of person who (carefully or not) studies a situation where change needs to occur, forms a strong opinion upon it, and then acts, dragging everyone along behind them. They impose solutions on their sites like generals. Howard Roark, the protagonist of Ayn Rand’s novel about an architect, would be a great example; he’s a genius, after all. The rest of the world should just get out of the way and let him build… However, these projects tend to meet with failure. Either the projects don’t get built because they don’t get buy-in from the client and the community, or if they are constructed they tend to not respond to the people they are meant to serve.

Times have changed. We are no longer so absolute in our intentions or beliefs as we were when Ayn Rand wrote the Fountainhead, if we ever were. The meaning of an architect’s creation always exceeds his intentions, whether he is aware of it or not. The best lecture I ever attended was a convocation speech in which Dartmouth College president, John Kemeny, spoke of the danger of leaders posing deceptively simple solutions to complex problems. Design is the same way. The thought that an architect comes up with a concept and simply applies it onto a site is no longer relevant, if it ever was. Architecture that does not respond flexibly to its surroundings tends to be very weak: We do not create the world as we go along, we respond to it. Form is something we end with as the final articulation of a deeper logic.

Then there is a second sort of leader. This person listens carefully to everyone’s point of view and negotiates his way carefully toward a solution for the situation he faces, trying to do the right thing by listening very carefully, providing a hierarchy of solutions to the problems he faces, veering and swerving with his process as he proceeds. The cost of the project is too high? Adjust! The forms don’t respond to the client’s desires? Adjust! We are talking here about evolution, not revolution.

This is an architecture of “strategies”. This kind of leadership is often messy. Yet architects need to be open to the complications of the world we live in. The world is messy and complex. Deriving a simple architectural solution from all this messiness is exceedingly difficult. As Raphael Vignoli, the architect of our convention center, once said, it’s easy to represent complexity with complexity. What is truly a challenge is to represent complexity with simplicity.

New buildings will be constructed, and in my opinion these building should reflect their times. My thought is that copying the look of past buildings shows those past buildings no respect, as the copies tend to be poor. Times change, and so do our needs and our methods of construction. Yet preserving our history is important. Although the old, it is said, must make way for the new, the city is richer if it’s history is preserved. For one thing, our preserved history is all that ties us to the past other than our memories, and our past is part of us. For another, old buildings are often beautiful, and possess value as art. 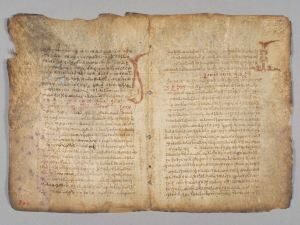 This is a palimpsest (from the Greek, palimpsestos, meaning scraped again). A palimpsest is a written document on which partially erased previous texts are still visible. One fascinating element of a palimpsest is that it contains a record of its own history. In other words, you can say that first one thing happened and then another. The city is like a palimpsest in that it too can be read as a series of layers.

So how can architects build new in Pittsburgh yet preserve the past? The way I have chosen is to design buildings and sites as though they are palimpsests. I design projects in which the existing context, be it the natural landscape, an existing building, or even a wall, is carefully preserved in its original state.  Then our new forms are added in such a manner as to complement the existing in unexpected but symbiotic ways.

Architects do not create the world as we design; we respond to it. However, despite the fact that our designs become richer as they begin to express the conditions of their surroundings, more often than not new Pittsburgh buildings do not reflect the character of the city we love. I attempt to demonstrate with my architecture how new and old may become very good friends without pretending to be exactly alike.

As I suggested in Reimagining Pittsburgh, maybe, just maybe, in these liminal places where old forms and new forms come together, the quality of ambiguity that is generated has the possibility to create a fluid situation that frees the viewer from the inflexible norms of contemporary life. Can thoughtful design make you feel good? Can it improve your life? I say “Yes!” In this sort of architecture, free from cliché and repetition, it may be possible to experience the world afresh and possibly form new connections with others…

See Fisher’s work and how he approaches and respects the history in the built environment on exhibit in “Towards a New / Old Architecture”, an exhibition exploring the concept of using modern architecture as the language for additions to and renovations of the rich building stock in the Commonwealth of Pennsylvania. The exhibition will feature exemplary projects from around the state that employ a contemporary addition as the counterpoint to a beautiful historic building. On view at the Susquehanna Art Museum September 13 – January 17, 2016.