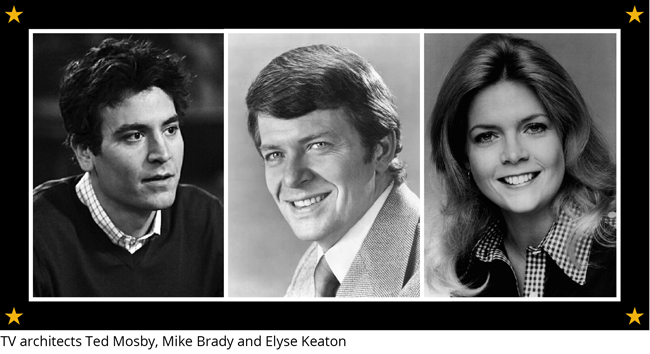 After nine seasons, the finale of the long-running and well-loved sitcom How I Met Your Mother is fast approaching. The show tells the story of a group of young professionals living in Manhattan, with the main character, Ted Mosby, recounting to his future son and daughter the trials and tribulations of dating and eventually meeting and falling in love with their mother. Mosby is also an architect, and over the course of the show has given the viewing audience a taste of the profession (as seen through the eyes of Hollywood, of course.) In honor of you, Ted Mosby, we look at some the top architect characters to grace both the big or small screen.

Mike Brady, The Brady Bunch – A staff architect at an unnamed firm in the Los Angeles region, Brady was also known for designing the mixed family’s home, a large midcentury house. Throughout the show, it is implied that he is a well-respected and highly qualified architect, with an exceptional dose of integrity, refusing to compromise on materials or undermine a project.

Sam Baldwin, Sleepless in Seattle – Is it the hopeless romantic aspect, or the single dad trying to do right by his son? Either way, Tom Hanks plays this architect as a completely lovable and affable fellow, and we’re obviously not the only ones who think so, given the classic status of Sleepless in Seattle.

David Murphy, Indecent Proposal – Another early-1990s movie but with a very different take on the male lead as architect. In Indecent Proposal, Woody Harrelson plays an architect with a vision. And a lot of insecurity. He also offers an inspirational lecture on the subject of architecture:

Wilbur Post, Mister Ed – Mister Ed’s quirky owner, Wilbur, was also an architect. This often eccentric character was known to be accident prone, which begs the question – what was his design like?

Architects 1 and 2, ‘The Architects Sketch’ from Monty Python’s Flying Circus – Speaking of eccentric, John Cleese does the profession proud as a slightly off-balance British architect with ulterior motives. Eric Idle plays the second architect in the sketch to propose his completely safe design.

Juror 8, 12 Angry Men – Henry Fonda plays the noble, intellectual juror, putting his architectural background to good use as he convinces his fellow jury members to take a hard look at what is truth and what is perception.

Elyse Keaton, Family Ties – The family’s matriarch, Elyse Keaton is a former hippie and independent architect. In a field of mostly men (both in the real world and Hollywood), this character stands out and brings some diversity to the field.

Ted Mosby, How I Met Your Mother – And finally, Ted Mosby makes our list, as one of the most lovable architects out there. Hopelessly romantic, in his dreams of both relationships and career, he strives to inspire others and is passionate about architecture, perhaps to a fault.

One thought on “Ready for Your Close-up?”