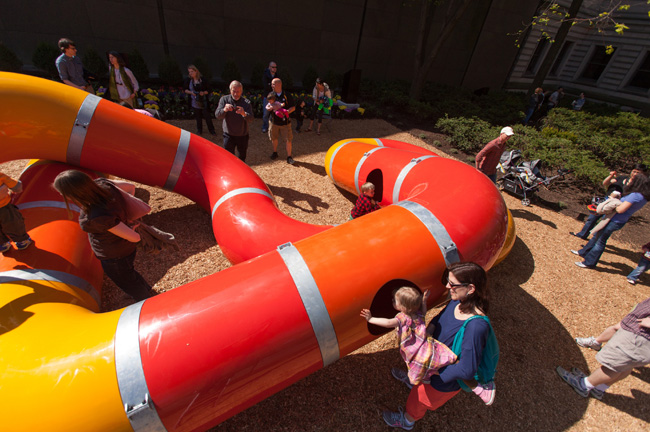 There’s a playground not too far from our house where we spend a great deal of our time on the weekends. It’s a small park, well maintained by the township, with a covered pavilion, swings, and a basketball court. The centerpiece is a multi-level play structure, with monkey bars, ladders, and a spiral slide. In the eyes of my son, though, it becomes so much more. It’s a castle… a fort… a truck… a spaceship…. a cave. It’s limited only by his imagination, and inspired by last night’s bedtime story.

The architect in me, that part of me that I simply can’t turn off, looks at that play structure with a discerning eye. It’s a simple thing, a kit of parts, scaled according to the most imaginative of resources — the client’s budget. Likely, if asked to design a playground on one of my projects, I might have detailed the concrete curb around it, possibly specified the surface material… But the play structure itself most likely would have been handled via an allowance, represented on my drawings as a dashed line, with a note disclaiming it as work by others. An act that requires absolutely no imagination whatsoever.

How ironic that a place so closely associated with the innocence and exuberance of youth is so telling of the jaded worldview of our profession. Our ability to see that which does not yet exist is a skill that we developed as children, but our design process is often clouded by real-world (read: “adult”) concerns such as liability, budget, practicality… What happened to our childlike imagination? 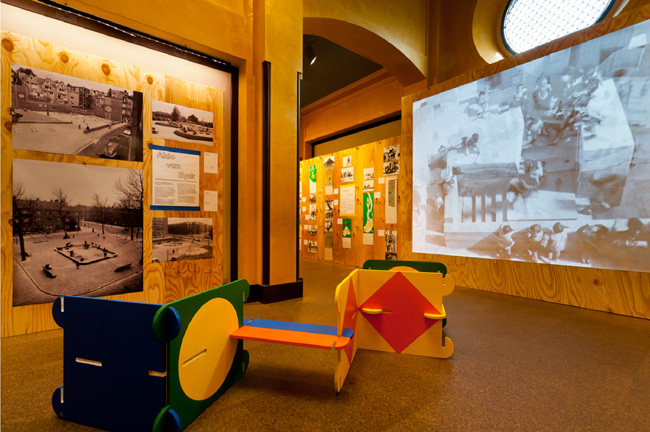 The Playground Project, guest curated by Gabriela Burkhalter and one of the four components of the 2013 Carnegie International, offers a look at a time when playgrounds offered unlimited opportunity for designers to experiment with material and form. “Experimental” isn’t a word that I would have used to describe structures that are expressly intended for use by children, but each of these projects tested the boundaries of public space, pushing the limits of play. Exploring the role of the playground as a catalyst for community pride and civic involvement, the exhibit features works ranging from the post-World War II era through the early 70s, coincident with the rise of the “DIY” movement in the United States, and arguably the heyday of playground installation. (A small section of the installation includes several books on playground construction, reinforcing the exhibit’s theme of personal experimentation.) 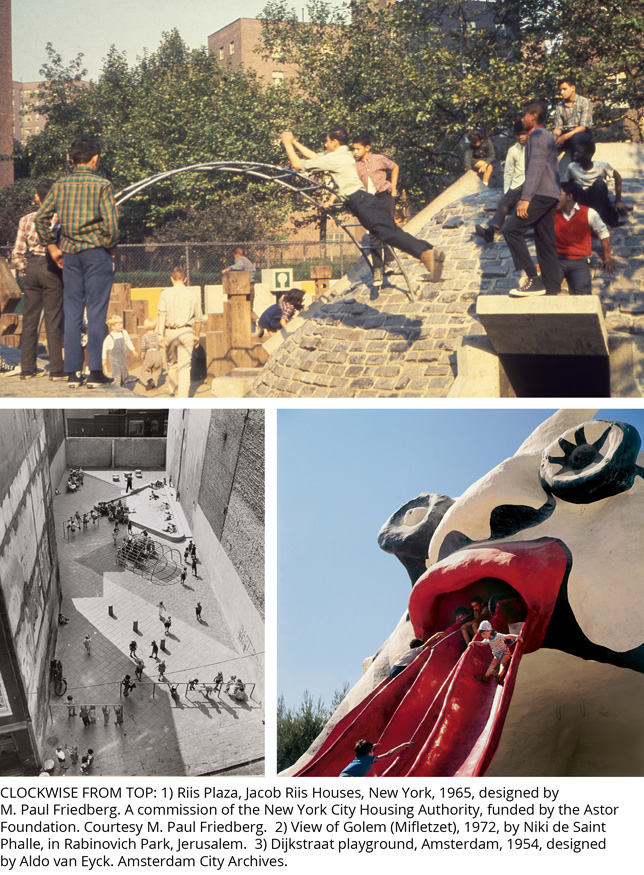 Focusing on the global issues surrounding the development of public spaces as a response to 20th century urban sprawl, the exhibit is staged on raw, unfinished materials – monitors stacked on concrete block, photographs mounted to rough plywood, descriptive text printed on large-format bond paper – reflecting the exploratory quality of the featured works. Included are roughly a dozen representative examples of the avant-garde in playground design from the United States, Europe, and Japan (including at least two – I won’t say which — that I wouldn’t let my child anywhere near). As an architect, I was filled with childlike wonder over the ambition of these designs, a mix of cast-in-place concrete and steel, rope and glass, stone and wood, each varying in form, geometry, elevation, and terrain… even if the parent in me cringes over the thought of how many twisted ankles and scraped knees came of each of these playgrounds. (The fact that this was exactly the point of the exhibit – the inherent danger in each design blatantly apparent, an affront to modern-day society’s litigious attitude toward risk – was not lost on me.) Each is unique and individual, ranging from the geometric to the sculptural… and not at all like the antiseptic, picked-from-a-catalog structure that we’ve spent so much time crawling over. One of the earliest works represented – Carl Sorensen’s design from a Copenhagen housing development – was literally a pile of junk, reimagined as a play environment. Netherlands architect Aldo van Eyck’s restrained plaza was more than a playground – tucked into a small alleyway, it was urban design on a micro scale. The Bauhaus-inspired design of Isuamu Noguchi’s brightly painted slotted wood planes was coupled with a full scale mock-up (which, strangely, we weren’t allowed to play on). A far cry from the sterile structures that frequent our playgrounds, the imagination of the designers are on full display here. Paul Friedberg’s 1965 Manhattan installation evoked images of a space capsule landing in a lunar landscape, while French artist Niki de Saint Phalle’s “Golem,” where children slide down the triple-pronged tongue of an enormous black and white creature, was positively frightful. 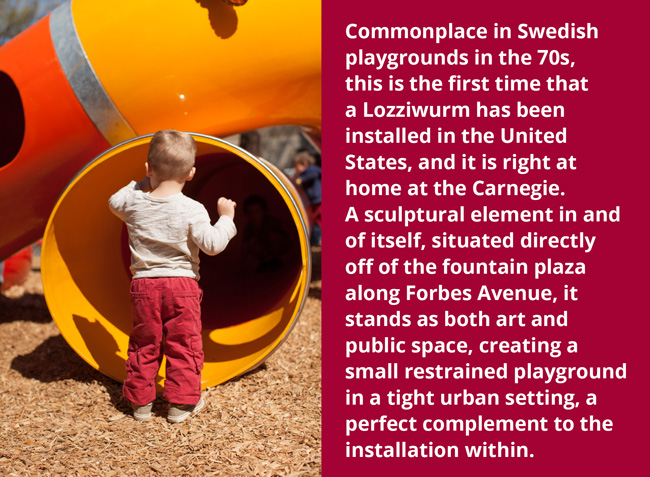 The exhibit, which runs through March 16, 2014, also leaves a permanent mark on the Carnegie with the installation of the Lozziwurm, a twisting red-on-orange tube that begs to be crawled through. Commonplace in Swedish playgrounds in the 70s, this is the first time that a Lozziwurm has been installed in the United States, and it is right at home at the Carnegie. A sculptural element in and of itself, situated directly off of the fountain plaza along Forbes Avenue, it stands as both art and public space, creating a small restrained playground in a tight urban setting, a perfect complement to the installation within. The simplicity of the design – twisting and folding over itself, a sloping tube that is shallow enough to climb, yet still steep enough for sliding – was as delightful for me as it was for my son, who intuitively understood exactly how to interact with it.

The centerpiece of the exhibit – run run run, an original installation by Tokyo’s Tezuka Architects (one of the featured artists in the 2013 International), a mix of balloons, fabric, and a large ellipse of bubble-wrap-covered foam – was a complete surprise, offering a full sensory experience that invites playful interaction. Against the projected backdrop of Japanese children playing in another of Tezuka’s projects, the installation was a flurry of energy, making the people in the room an integral part of the art, and seemingly incomplete when empty of museum-goers. Ironically buried deep within the building (making us pass through immense silent chambers of art that must simply be… looked at), the exhibit changes the nature of the museum, making it something that I didn’t think was possible –  a place to play, where touching is not only allowed, but encouraged. The balloons were even offered as take-away, a souvenir of our visit, possibly the first time in memory that we were allowed to remove part of an exhibit.

The Playground Project celebrates imagination in design, allowing us an opportunity to reconsider our notions of public spaces… and, particularly with run run run and the Lozziworm, injects playfulness into a space that would otherwise not come across as very child-friendly (“don’t touch that, honey – it’s art”). Architects have never been the sort to turn away from our global issues, which is why I find the sense of whimsy in the exhibit so refreshing. This is design for pure enjoyment – these playgrounds won’t prevent a natural disaster or reduce our carbon footprint, but they will spark the imagination of children – and hopefully more than a few adults – for generations to come.

One thought on “Playing in (and on) The Playground Project”