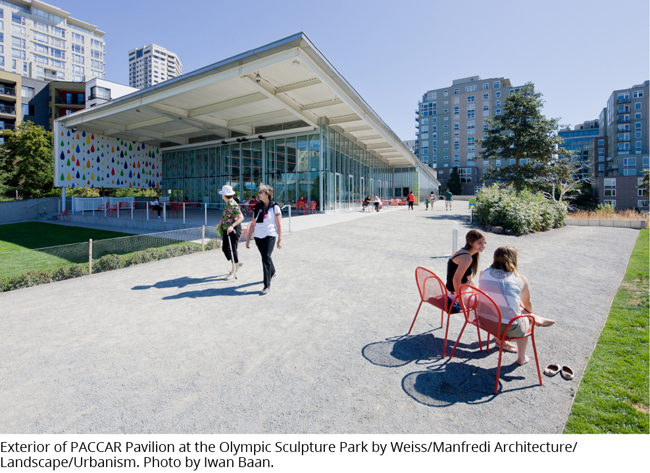 The new exhibit at the Heinz Architectural Center at Carnegie Museum of Art – White Cube, Green Maze: New Art Landscapes – is an abounding display of six art institutions – or “sites,” as curator  Raymund  Ryan prefers – from around the globe that challenge the traditional museum setting. All six diverse sites are connected in their rupturing of the  “white cube,”  ultimately blurring distinctions between art, architecture, and landscape.

Chosen by Ryan, the featured sites are themselves substantial, and so is the exhibit, whose mixed media collection is punctuated by the featured photographs of renowned  Iwan  Baan (a recent recipient of the Gold Lion at this year’s Venice Biennale).  White Cube, Green Maze  also features work from  18 different international architectural firms including Weiss/Manfredi, Álvaro Siza Vieira,  Tadao  Ando, Tatiana Bilbao, and others, demonstrating  fruitful  collaborative efforts not only between designers, but between people, landscape, and art as well.

On September 21st, the Heinz Architectural Center held an opening event for the new exhibit,  “A Conversation with  Iwan  Baan.”   Photographer Baan presented selections from his work  commissioned for the exhibit.    As Ryan described while introducing him, Baan photographs “buildings with use and context,”    centering on the user in the space rather than promoting architecture as singular sculpture or object.  This  humanistic focus  makes the projects genuinely accessible.  Baan spoke anecdotally of  his visits to the sites, and it was delightful to hear words that meet the vivacity, charm, and intimacy of his visual work.  While talking about the Benesse Art Site Naoshima, he shared  how the local residents of this small Japanese island  sometimes affectionately call their home “Meow-shima” because of the many cats that wander about. “Little kids are more interested in the cats than the art,” Baan commented as he presented an image of children gazing at stray felines while their parents contemplate  sculpture  at the  Inujima  Art House Project (Kazuyo  Seijima).    Baan has captured well the essence of these projects, which equally prioritize observing objects of art and experiencing their context.    This holds true whether the context happens to be something planned, such as the structure that shelters and frames the pieces of art, or something that has arisen, such as stray cats that walk the institute grounds.

The sites featured in  White Cube, Green Maze: New Art Landscapes  challenge  the first part of the exhibit’s title as they exemplify the second. The phrase “white cube” was coined in the title of Brian  O’Doherty’s 1976 essay  “Inside the White Cube: Notes on the Gallery Space”  (originally appearing in Artforum Magazine). In his essay, O’Doherty describes the modern art gallery as a space where “The work is isolated from everything that would detract from its own evaluation of itself.”  Contrastingly, the six art institutions featured in this exhibit underscore the context in which the art is situated. These sites ultimately blur the distinction not only between art and architecture, but go on to meld landscape and architecture,  as well as art and landscape.  The white cube is shattered and adhered back together by the landscape, and visitors are left with a “green maze” (or “labyrinth,”    perhaps  more appropriately, as Ryan described to me during a visit to the exhibit) where they can navigate their own journey through the landscape, structures, and works of art.

Of course, it is ironic that such sites be displayed as works in a museum that essentially embodies  O’Doherty’s “white cube,” the Carnegie Museum of Art.  Ryan has embraced this paradox, and has even erected a literal white cube in the gallery that serves as a threshold into the exhibit at its main entry from the Hall of Sculptures balcony.  Upon entering, the white cube is exploded into a green realm, and content follows that is presented in unconventional, non-linear ways.  It is a rich multi-media, multi-sensory experience; objects displayed alongside Baan’s photographs include: scale models of various abstraction and materials, original and reproduced diagrammatic and technical drawings and sketches by the architects, historic photographs, videos, interactive screens, and even incense (embedded in the scale model of  Seirensho  [Hiroshi  Sambuichi] to emphasize importance of air flow in the project).  Innovative  to CMOA are the six interactive panels in the gallery, touch screens where visitors can find more information about the sites as well as view additional Baan photographs.  Video displays provide another kinetic opportunity to interact with the exhibit, and they go well beyond documenting the artwork and architecture of the sites.   For instance, in what  Ryan  calls “Glug, Glug, Glug,” – part of the Olympic Sculpture Park (Weiss/Manfredi) display – three monitors show the underwater life of the fish that have returned to this formerly polluted area of the Puget Sound.   This exhibit goes to lengths to emphasize contextual impact even at an ecological scale; our interventions into the landscape and built environment have proliferate affects. 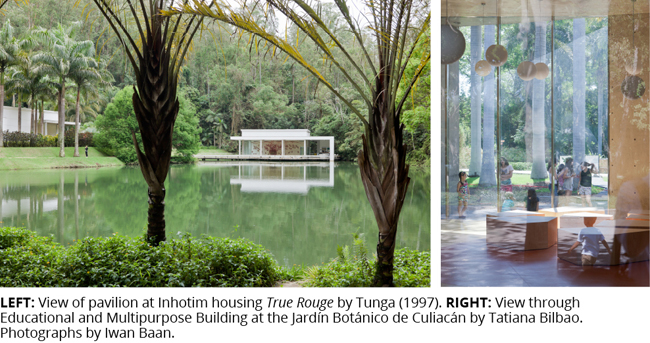 White Cube, Green Maze: New Art Landscapes  rounds out a recent landscape-oriented theme at the  Heinz Architectural  Center; Maya Lin’s  Intimate Landscape  exhibited earlier this year, and CMOA  hosted a lecture from Oakland, CA based landscape architect Walter Hood last spring.  Accompanying the exhibit is a book, co-published by The University of California Press which includes an introduction by curator Raymund Ryan, contributions by Brian O’Doherty and landscape writer Michael Treib, as well as additional photography by  Iwan Baan. The exhibit is on view at the Heinz Architectural Center, Carnegie Museum of Art until January 13.  Next, it will travel to Yale School of Architecture Gallery, where it will be on view from February 14 to May 4, 2013.

2 thoughts on “New Art Landscapes speak with many voices”