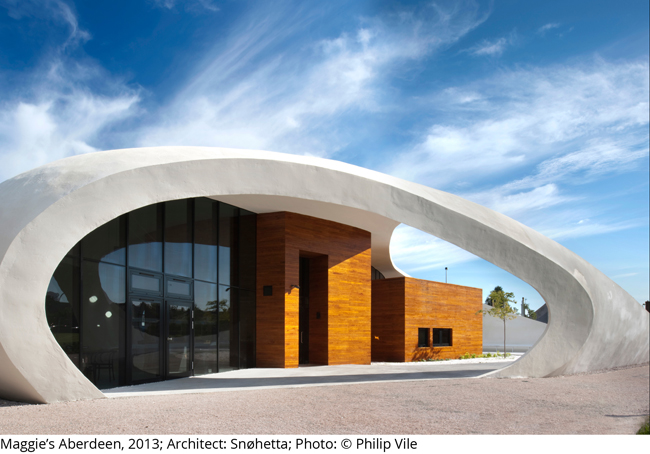 In 1988, Maggie Keswick Jencks was diagnosed with breast cancer. For four years she battled, seemingly successfully, but in 1993 the cancer roared back. She was given two months to live. Crushed, she returned home, despondent. And that’s how she may have lived her last two hopeless months. But with her husband Charles Jencks, she assembled a “pile of hope” from popular news at the time. Every day details came out about some new treatment or another. People all over were cheating their own two month death sentences, through treatment, diet, exercise. Empowered by this information, she took charge of her treatment and sought advanced chemotherapy. She also connected with fellow cancer patients for support and community. She lived two full years, motivated and in good physical and mental health, before her death in 1995.

Since then Charles Jencks, landscape architect and architecture theorist and critic, has carried on her legacy through Maggie’s Cancer Caring Centres, a Scottish charity that he founded with his wife before her death. Each of Maggie’s Centres is located near a hospital, primarily NHS hospitals in the United Kingdom (a location in Hong Kong being the notable exception). Each center is unique, designed by some of today’s most prominent architects, but each strives to achieve a simple set of goals: enable a small staff to do research and fundraising, empower a community of cancer patients through knowledge and emotional support and, above all, provide hope for that community. Maggie’s Centres: A Blueprint for Cancer Care, on view through January 15, 2015 at the Carnegie Museum of Art, shows how different architects take on this challenge. 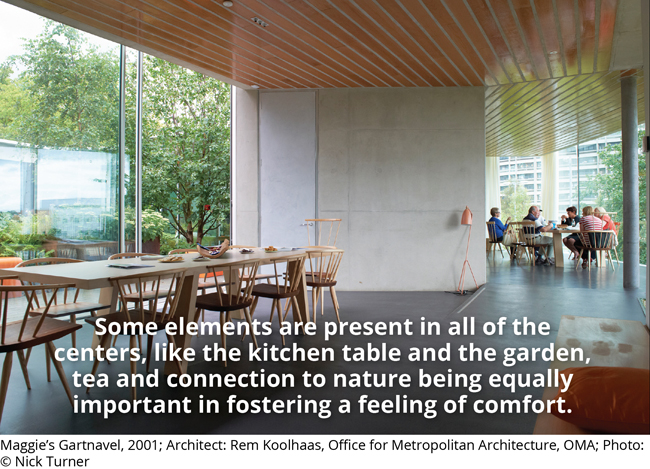 Raymund Ryan does a great job of organizing the exhibition (organized by the New York School of Interior Design) in the thin slice of museum belonging to the Heinz Architectural Center. Entering from the Scaife Galleries brings you into a long hallway where informational panels flanking the entry doors explain the history and mission of Maggie’s Centres. Large photographs on both walls of the main hall show the wide range of environments and architectural styles that the centers are built in. There are four galleries accessed from the main hallway and each features a single center in greater detail (except for the largest gallery, which features three). Some projects are accompanied with a short, looping video featuring the design team. Where there are videos there is comfortable furniture to watch them from, a nod to the goal of each center being a space that is like “walking into your own home”.

Each care center acts as a humane counterweight to the nearby hospital, which Jencks often refers to as “the machine”. The mechanization of hospitals is an effective way to refine treatments for diseases, but often leaves the psychological and social needs of patients unmet; Maggie’s Centres seeks to fill this void. Some programmatic elements are present in all of the centers like the kitchen table and the garden, because tea and connection to nature are equally important in fostering a feeling of comfort. Despite these common elements and simple program (relative to most medical building types), the centers as a whole show a wide range of formal solutions. The six Maggie’s Centres on display are chosen from all parts of that spectrum, not only in the architecture but the documents shown to support it. For Richard Rogers’ urban center lively sketches on yellow trace paper accompany a classic white model. Frank Gehry’s signature metal roof appears in model form and three of his simple, flowing sketches are juxtaposed against the dense and complex final plan. 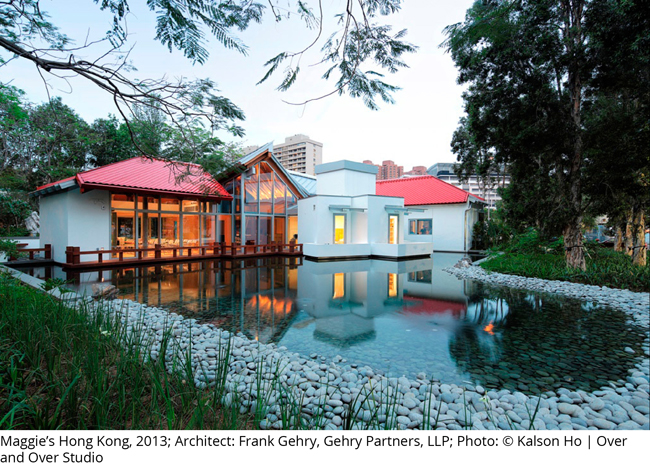 Rem Koolhaas and Charles Jencks also have works featured, but two others are especially interesting because of how differently they are presented. The first is a “not yet realized” design by Steven Holl called Maggie’s Barts which will occupy a courtyard on the grounds of St. Bartholomew’s Hospital. In the video that accompanies the renderings and sketches Holl explains, at length, the rich history of the site, the musical inspiration for the form of the building, and how the new Maggie’s Centre will relate to the (very) old hospital that is adjacent. His solution is an interpretation of medieval neumes, a form of musical notation that precedes the five-line staff. He has developed a facade material in which layers of matte glass, perforated plastic and colored acrylic create a system that is high-tech yet promises to feel warm and comforting. This material wraps the concrete and bamboo interiors so that anyone inside is surrounded by music. The execution is clear and strong, perhaps so strong as to be overly rigid. For example, the renderings show regularly spaced horizontal lines at the facade of the new building that appear to have little relationship with the geometry of the adjacent building. 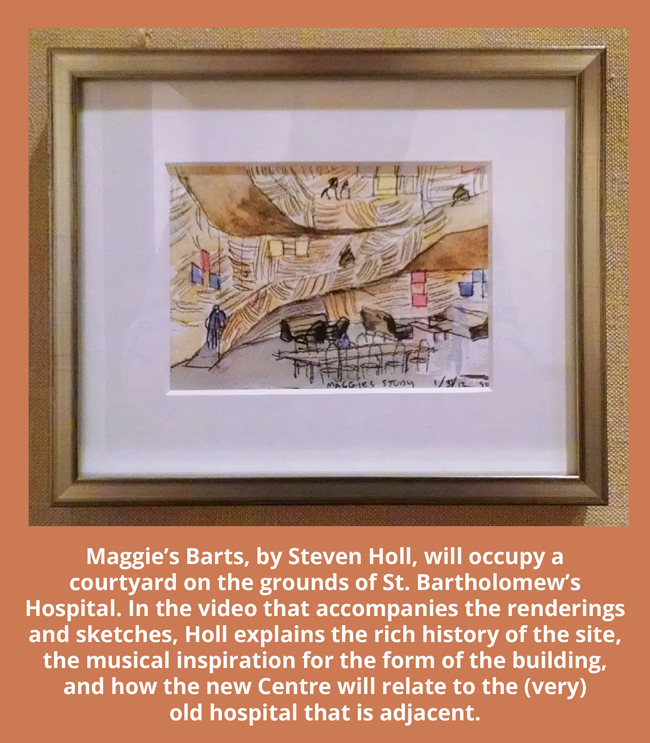 Two galleries away from Maggie’s Barts is Maggie’s Nottingham by Piers Gough of CZWG Architects. Looking at the center from the outside recalls a treehouse in the way that the whole building is lifted into the canopy of the mature trees scattered through the site. And, as Jencks referenced in his lecture, each facade is a takeoff on the traditional “face house” that a child might draw, with two windows for eyes and a door for a mouth. Gough even completes the facsimile with a set of ears for each face.

But the overall impression is more alien than terrestrial. If the facade is at all familiar, the roof is anything but as it contours between the ovals to resolve into a single point like a hat that begs for a tassel. The project’s strongest formal move is perhaps its greatest weakness. By floating among the trees and not physically engaging them the connection to nature is only visual; a visitor needs to walk across a concrete causeway to get real dirt under their feet. 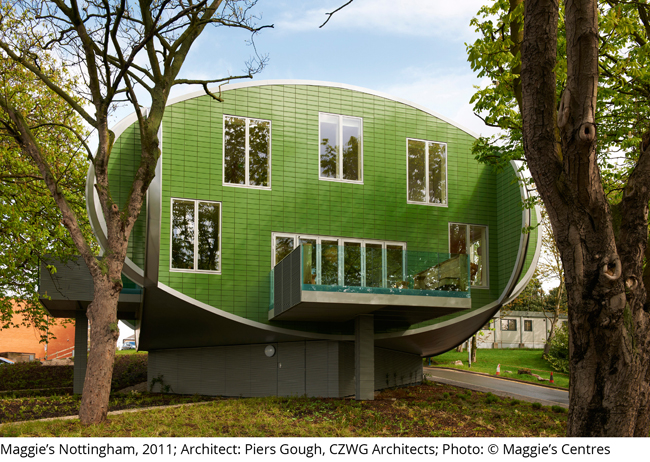 A slide in Jencks’ lecture shows the variety of parti diagrams for each care center, and he makes the comment that each of Maggie’s Centres functions equally well despite major variations in organization, massing, and materials. The final designs, though, are the product of some very polarizing architects, so the structure of the exhibition allows for public feedback. Each center featured in the exhibit has a tube where you can drop in a tiny green house representing your vote for the Maggie’s Centre that best meets the design challenge; at the time of this writing Maggie’s Nottingham leads Maggie’s Barts by a healthy fourteen inches to nine.

Could it be that the public is responding to the architect that appeals most to the experience of occupying their building? Holl’s sketches and renderings contain only ghostly suggestions of human form. Being an as-yet unbuilt work it would be impossible to photograph actual people using the space. But even in the accompanying video, most of the time is spent on Holl explaining the conceptual foundation for his addition. Just one sentence refers to the experience of being in the space, when Holl speculates that it would be a “nice place to spend time and relax”.

Contrast this with the video for Maggie’s Nottingham. Gough and his team describe Maggie and her legacy, explain that the goal is to make people feel special as well as relax them, and even go so far as to feature the chairs and their upholstery in lush soft focus as they outline the need for comfort. In sharp contrast with nearly all other featured projects, interior photographs of Maggie’s Nottingham prominently feature patients and staff using the space.

The presentation is much more about the feelings that the building evokes than the concepts that shaped it, and the viewing public has responded favorably. One of the questions explicitly raised by the exhibition is, “must healthcare facilities appear so similar, so lacking in character, so removed from nature?” Surely not, but to truly stand against “the machine” these facilities must do more than cross the thresholds of being different, having character, and being connected to nature. When confronted with buildings so foreign to medical design, the public appears to demand documented proof of the building’s humanity. With 16 centers operating and more being planned, perhaps that is all the proof that’s needed.