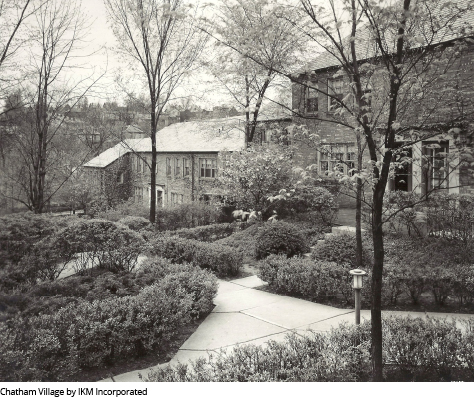 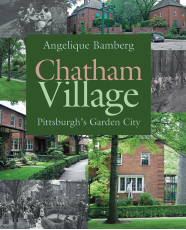 2011 was an exciting year for Chatham Village, the residential community in Mt. Washington recognized as a thriving example of the garden city planning movement.  First, the Village was brought back into the limelight with the publication of Chatham Village: Pittsburgh’s Garden City.  Penned by the city’s own Angelique Bamberg, an expert in city planning and historic preservation, this book provides an in-depth look at the history, development, and socioeconomic impact Chatham Village has had both on the region and on the profession of urban planning.  Then Chatham Village, and the architects who designed it, were honored with AIA Pittsburgh’s Timeless Award, an award created to recognize architectural design of enduring significance, conferred on projects that have withstood the test of time.

Founded in 1932 as a solution to the shortage of decent, affordable housing for the working class, Chatham Village was designed by urban planning greats Clarence Stein and Henry Wright and funded by the newly formed Buhl Foundation and its leader, Charles Lewis.  “Like Stein and Wright,” Bamberg writes, “he was ahead of his time in his concern about the environmental effects of sprawling subdivsion construction.”  However, Lewis believed that “private enterprise was the economic expression of democracy,” and sought to build Chatham Village as a model of how builders could create high-quality new housing for those of modest means as a profitable development – socially and environmentally responsible capitalism.  “To demonstrate this, Lewis hired Clarence Stein and Henry Wright, both architects and housing reform advocates who designed entire communities inspired by the belief that the built environment could transform the way people lived.”  Built on a hillside parcel on the edge of Mt. Washington, the plan embraced the Garden City movement, building connected houses around communal greenscapes. 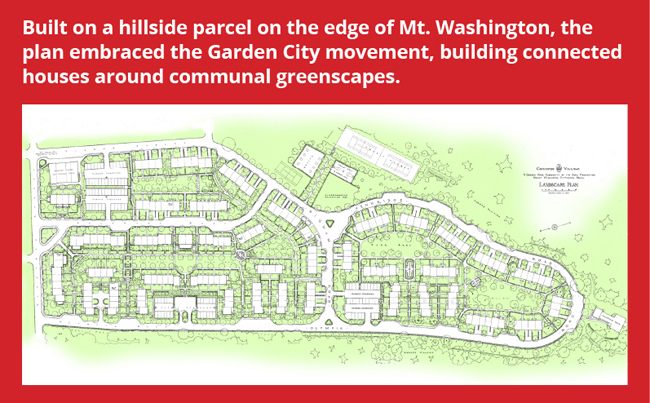 In the 80 years since its conception, Chatham Village has boasted no lower than a 97% occupancy rate, first as a rental community and later as a corporation of resident members within a cooperative housing plan.  Among the residents, architects and design professionals have often been drawn to this community.  Columns recently caught up to a number of those who have experienced life in the Village to talk about how and why they call it home.

So how does one learn about a small residential community that is often unknown to those who have lived in this city all their lives?  For many, the first exposure to Chatham Village was while in school studying to become architects.  While at universities as diverse as Cornell to the University of Kentucky, future architects were being introduced to this model community in their classrooms and later, upon landing in Pittsburgh, seeking it out as an opportunity to live in this truly unique environment.

“I first learned of Chatham Village at a college lecture, while studying architecture at the University of Kentucky,” recalls David Vater.  “After class I asked Professor Phil Noffsinger, ‘What was the name of that housing development in Pittsburgh,’ and he said, ‘Chatham Village.’  When I returned home for spring break, I drove up to Mt. Washington to see it.”  Vater went on to purchase a home there in 1984 and resides there today, 28 years later.  “I admired its ingenious planning, attractive landscaping, and its handsome, orderly Georgian Revival architecture.  I felt then, and still do, that you should live somewhere that makes you feel good, where the architecture welcomes you home each day, a place that is comfortable, relaxing, and encouraging.”

Similarly, landscape architect Boyd Ernzer first heard of Chatham Village while at Penn State University in 1966, in Professor Lynn Miller’s class ‘History of Landscape Architecture’, and went on to visit later that year.   “ In 1968, my first job after graduation was with Griswold, Winters & Swain,” Ernzer remembers.  “Ralph Griswold was a member of the design team that designed Chatham Village in the 1930s and Margaret Winters, who was the first woman landscape architect in Pittsburgh, lived in Chatham, as did Robert Fenton, a landscape architect whose office was in Shadyside through the 1990s.”  But unlike Vater, Ernzer did not make his home there until just recently.  “[My wife] Sharon and I lived in the city when we first married and our goal was always to return at some point after our children were grown…. After revisiting Chatham Village, we still loved the old character of the architecture and were impressed by the way the trees and landscape seemed to naturally surround the clusters of buildings.”  They moved to Chatham Village in December 2010.

The Ernzers’ experience of choosing not to raise their children in the Village is not an uncommon one.  Many have found the small townhouses to be unaccommodating to growing families.  Designer Betsy Bell Martin, Assoc. AIA, recalls “love at first sight” when being introduced to Chatham Village by friends who lived there, and moved in with her young family in 1953.  Since the community was still rental properties at that point, the Martins were able to go from their initial 2-bedroom house to a 3-bedroom with ease, but outgrew it after having three children, and sought to build their own house.  “It was an easy place to make lasting friends, because of the clubhouse, the classes and parties held there, the nursery school, the tennis courts, and the proximity of the houses. I loved living there,” Bell Martin says.  “I would move back now if it weren’t for the steps.”

While the community was designed to support young families and be an ideal place for children, some found it challenging. “Chatham Village was not an easy place to raise a family,” confesses Roxanne Sherbeck, AIA.  She moved there in 1985 after marrying fellow architect, Jon Jackson, FAIA, who already lived there.   While nominally a 3-bedroom, “it is more accurately a two and a half bedroom.  We raised our son and daughter there, and since Annie was older and a rather demanding girl, she got the larger second bedroom.  It’s really surprising that the little bedroom didn’t stunt Tristan’s growth and he ended up 6’2” tall anyway!”  Sherbeck laments not having a space where her children could hang out and have friends over, as well as a place to do projects like sewing and crafts.  Additionally, while she acknowledges wonderful neighbors, she admits that very few chose to raise kids in Chatham Village.  And despite the long bus ride, Jackson and Sherbeck decided on sending their children to client school Winchester Thurston; the choice “also meant that Shadyside, not Mt. Washington, became their real neighborhood in high school.”

Living by the rules

In 1956, the Buhl Foundation decided its experiment in housing had proven a success.  As such, it began to research how the residents of Chatham Village could be given the opportunity to own their own homes.  The Foundation for Cooperative Housing (FCH) – a nonprofit organization dedicated to encouraging cooperative housing in the interests of the consumer – was contacted and negotiations were entered with the intended outcome of selling Chatham Village to the FCH (on behalf of the tenants), who would sell it to them in turn. Of the 216 residences, only four families chose not to stay and buy into the cooperative corporation – Chatham Village Homes, Inc. – that was formed to own and manage the community.  “The corporation held one title to the entire property, including buildings and land, and the title was divided into 216 shares – one per living unit,” explains Bamberg.  This type of ownership helped to maintain the integrity of aspects of the community, such as communal grounds and recreational areas, which were essential to the original plan.  But cooperative ownership also means that residents are responsible for the built environment all around them, not just their own dwelling.  As such, policies have been enacted to ensure that each owner helps preserve “the distinctive architectural features of our site and buildings…”. While most residents find such guidelines comforting – something to help protect their investment and keep the feel of the community intact – others can find it restrictive.

“There are lots of rules,” admits Sherbeck.  “Some of them are helpful in maintaining the quality of the physical environment and as reminders of social consideration, but some of them are silly (like a relatively recent prohibition of flower pots larger than 18” in diameter).  And the truly unfortunate ban of dogs that has been a real sacrifice for the dog lovers in our family. ”

Intern architect Jonathan Hoag, Assoc. AIA, purchased his first home in Chatham Village three years ago.  Having finished graduate school, he was working downtown and trying to figure out his next step when his father suggested looking at this small community.  “After my first walk through I knew I wanted to live there,” he recalls, and began working with the Village office to see what units were available. He quickly came to the conclusion that he was looking for a place he could renovate himself, with the help of his dad, a process that required approval from the Village board.  He was able to complete these renovations in under three months, and has been happily living there since.

“Although people sometimes critique the amount of rules we have in respect to the outside, those rules provide exactly what everyone living there considers the most valuable aspect…. the feeling of security, in many senses.   Because of the co-op and how it operates, I never have to worry about a major structural or mechanical issue with my investment….  I will never have any unforeseen expenses.  It’s a huge relief to know that my first home will end up being a great investment if I ever choose to sell it.”

“Given so many restrictions, the reasons why we’ve chosen to make our home in Chatham Village are very powerful,” Sherbeck agrees.  “Much of the appeal resides in the design:  the way the site is organized that gives us views to the woods on one side and a garden landscape on the other, a sense of calm and order and protection from the bustling city outside. But ultimately the major factor in staying at Chatham Village has been the underlying sustainable values that it captures: dense but humane development, timeless architecture and landscape, a commitment to affordability, a short commute, an energy efficient abode, and a community of interesting people, (including many other architects) who appreciate the same qualities.”

While Chatham Village was unable to revolutionize residential design, it has withstood the test of time and remains one of the best examples of planned housing in this country.  The careful consideration that went into the initial design, the focus on the nature all around them, and the desire to build a strong sense of community proves relevant today as architects still seek to call it ‘home’.

3 thoughts on “Living By Example”