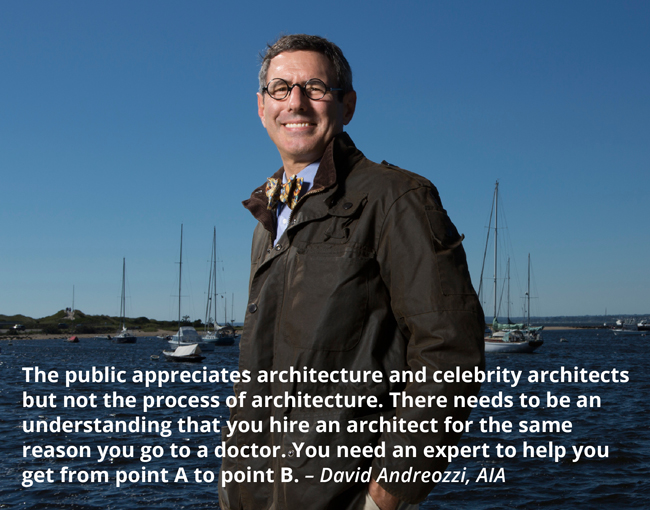 Last September, the Custom Residential Architects Network, an AIA Knowledge Community, created their own channel on YouTube, CRANtv, and published a short video entitled “The Architect’s Education”. Ten months and four videos later, CRANtv has garnered over 7,000 views and its creators hope to continue to build a library of educational tools to communicate the value of the residential architect. Columns was able to catch up with the AIA National Chair of CRAN David Andreozzi, AIA and learn more about how the series was started.

COLUMNS: You are a residential architect in Rhode Island, as well as involved at not only a local but national level with the AIA and the Custom Residential Architects Network. How and why did you became involved with CRAN?

COLUMNS: What led to CRANtv being created?

DA: The video series is a partnership with Doug Patt, who has his own video series “How To Architect” that focuses on what goes into being an architect.

COLUMNS: How were the topics chosen for each video?

DA: This is funny, we started with the list of ten titles, and only made it through two. People keep suggesting better ideas than ours! They come from you, the AIA!

COLUMNS: What sort of feedback has the series received? Anything that has been surprising? What has been the reception within the architecture community?

DA: The first thing that surprised us is that the AIA mother ship lauded our efforts as a perfect example of Repositioning. An example of volunteers at a grass roots level creating content, pushing it upstream, and then having it distributed outwards to the AIA. That was rewarding to hear. Also, 7,000 views and counting is even more surprising!

COLUMNS: Who is your target audience? And do you feel that the videos are reaching that audience?

DA: CRAN recognizes that we have a responsibility to educate the public on the importance of hiring architects, much like CORA does.  The architecture community has created this image that architects are a bunch of crazy people who wear bowties and do massive projects, which simply isn’t true.  The public appreciates architecture and celebrity architects but not the process of architecture.  There needs to be an understanding that you hire an architect for the same reason you go to a doctor.  You need an expert to help you get from point A to point B.  Architects serve as advocates for clients, protecting their interests and home value.  They become an important part of any construction team.

We’ve spent the last decade shooting ourselves in the foot by giving grand awards to only the most modern architecture.  This publicity creates an illusion that you should only hire an architect if you want an extremely modern design.  The reality is that anyone less qualified than an architect probably cannot provide the expertise that clients need.

By watching the videos, people get the sense that you don’t have to hire an architect to do all of the designing.  They can serve as a consultant and may only spend a few hours with you helping you make good design and financial decisions. The videos are linked on several AIA websites, and we are encouraging architects to link them on their sites as well.  The goal is to get potential clients to understand the differences between an architect and your average designer so that they know if they need an architect for their project.

COLUMNS: What does the future of CRANtv look like?

DA: This is a good question. While we will continue to build the library of educational videos over the next many years, many have asked us to create real shows of architects and historic architecture, something like a very small scaled version of Cool Spaces, but in line with our ethos.  The reality is that we at CRAN are all doing this for free to help improve the AIA, and videos that are more like TV shows take real money and full time efforts.  I am not sure I ever see this being possible unless a third party saw value in the concept.