Being Elmo: A Puppeteer’s Journey is a rags to riches story with a twist. The protagonist, Kevin Clash, finds fame not through sports or music, as so many heroes in these stories tend to do, but through a much less mainstream manner; all his life, Kevin Clash wanted only to be a puppeteer. In chronicling Clash’s journey from church entertainer to local television personality, all the way to Sesame Street, the film is as much a story about ambition as it is about personal discovery… that even those of us that seem to know exactly what we are destined to become, and work steadfastly in pursuit of that goal, can still be transformed by the process. 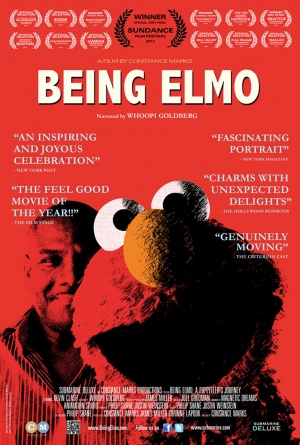 Clash is portrayed as something of a social outcast, spending his time in his native Baltimore crafting his own puppets (one of which was made from his father’s good jacket, a testament to how truly supportive his parents were) while other children his age were playing football (some heckling from his classmates, in fact, seems to be one of the few obstacles in what can be called a meteoric rise to fame).  Clash, so deeply inspired by the work of Jim Henson, made it a life goal to meet Henson and work with him. Clash found some early success in the world of puppetry, working in Baltimore television before landing a gig on “Captain Kangaroo”.  Clash’s close relationship with his mentor, Kermit Love (better known as Big Bird), finally led to that first meeting with Henson, and Clash eventually joined the cast of “Sesame Street” in the ’80s as a supporting player.  It was there that a defunct fuzzy red monster, a character that had failed to resonate with any of the other performers on the show, crossed his path. The character was about to be dropped when Clash picked him up, improvised that now famous falsetto, and created a cultural icon.

It is here that I have to stop and confess: I was well beyond watching “Sesame Street” when Elmo became part of the zeitgeist, and I was way too old to care when the Tickle Me Elmo doll became *the* must-have toy of 1998.  It’s safe to say that I just didn’t get why Elmo was so important.  Becoming a parent, however, has changed all of that.  I don’t know if it’s the bright crimson fur or that high-pitched voice, but Elmo is one of the few television characters that completely captured the attention of my infant son, who cannot yet walk or talk but becomes completely entranced whenever the little red guy is on screen.  That’s what made his dad – the ever-inquisitive architect, always wanting to know how things are put together – stand up and finally take notice.  I always want to know what’s just outside the frame, what literally is pulling the strings, and that’s exactly what the film delivers.  For that simple reason, any of my colleagues that have even the slightest curiosity about how things are made, and what exactly is involved in how something has come to be (read: nearly all of them), will find Being Elmo magical.

The voice — and the fact that it comes from a man as physically large as Clash — is striking, but seeing the character come to life in the hands of a master is truly mesmerizing.  The physical performance is profound: Clash *is* Elmo; without him, that lovable little red monster is nothing but a mass of red fur and felt.  The film, fortunately, never descends into cliché, or relies too heavily on Elmo’s built-in brand (the theme from “Elmo’s World,” mercifully, isn’t heard once).

The craft of puppeteering – the anthropomorphizing of an inanimate object – is really what captures the attention.  The subtle motion of the puppeteer’s hand, which creates nuanced expression in his muse, is simply fascinating to watch.  The film may be a biographical piece on Clash, but it’s at its best when it focuses on the act of creation, the physical presence of the character that is embodied by the operator.

As biographies go, Being Elmo falters a little in the investigation of its main character; Kevin Clash, the man, is nearly overshadowed by Kevin Clash, the puppet-master.  Indeed, other critics have panned the film for spending too little time exploring Clash’s personal crises — his failed marriage, his rampant perfectionism, his workaholic lifestyle, his strained relationship with his daughter — but seeing Elmo literally come to life in his hands is probably more than enough for most viewers. It certainly was for me.

“Being Elmo: A Puppeteer’s Journey” screened at the Harris Theater in January.  It is now available to watch instantly on Netflix.