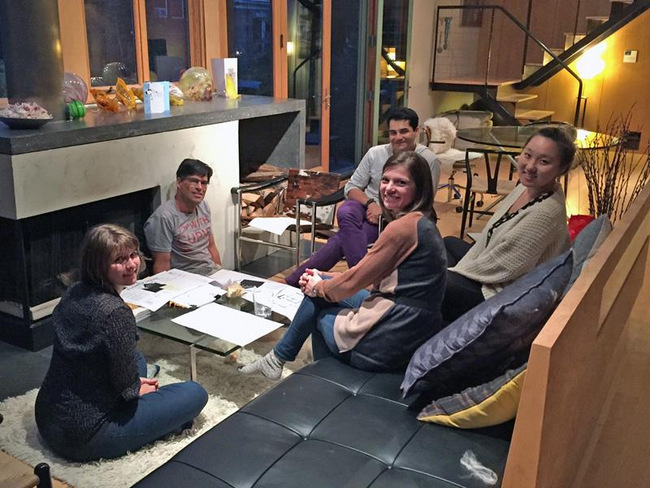 Young architects need a wide range of experience to become well-rounded professionals, and that’s not always possible to get exclusively from the places they work. That’s why mentors are so important – to help bridge the gaps that a job cannot fill. The local AIA Pittsburgh YAF (Young Architects’ Forum) chapter has historically struggled to establish a program to nurture mentor/mentee relationships. Elsewhere in the state, however, AIA Pennsylvania’s Emerging Professional committee has come up with a unique program of their own that has proven successful. Now, for the first time in Pittsburgh, when you need a hand finding a mentor, there’s AIA Pennsylvania’s PALM Program.

PALM stands for Promoting Advocacy and Licensure through Mentorship. It was developed in part by Melissa Bernstein, AIA of AIA Philadelphia, serving on AIA Pennsylvania’s Emerging Professional committee, several years ago after she was inspired by a seminar at AIA Grassroots. The seminar looked at several types of mentorship programs, and after thinking about what made each program work (or not work), she gravitated to the idea of bringing groups of people together, rather than forcing one-on-one meetings. Bernstein reviewed the program with peers and coworkers before running a program trial in the fall of 2010.

AIA Pennsylvania’s PALM Program is designed around group discussion. What makes the program so successful is that each group contains architects in all phases of their careers, from students to recent graduates, the recently licensed to the long-established.

One advantage to having a mix of age groups and experience is explained by participant Sean Sheffler, AIA: “It made for some dynamic conversations and was much more accessible than a one-on-one meeting. There was less pressure to sustain a conversation.” And while one mentor is valuable, PALM believes that it’s best to have a network of people to contact for advice on different situations. PALM builds this type of network from the start. And having people in the group at different points in their careers creates opportunities for mentoring to happen in both directions: up and down.

Mentoring down is what comes to mind when I think of mentorship in the traditional sense: where one sage-like figure passes on timely advice, usually in puzzling quips, whose meanings only reveal themselves with time. But you’ve also heard teachers saying, “I learn more from my students than they do from me”. That’s mentoring up, and it’s valuable for keeping everyone connected.

Since YAF Philadelphia’s modest 16-person trial run in 2010, the program has been run five times, often with over 100 participants. AIA Pennsylvania has seen this success and is now looking to translate the program statewide. As a result, they called upon the YAF membership in Pittsburgh to run a trial program of our own, headed by yours truly. This meant that, in the year 2015, I was in the remarkably unlikely position of asking people if they were interested in a PALM pilot. Luckily, many people were too young to get that reference and the rest were too polite to acknowledge it, and I was able to find enough people to fill six groups. The personnel were selected from people active in the AIA, AIAS, and YAF.

These six groups met over several months in 2015, between September and November. Four groups completed the program, which consisted of three meetings. The meetings could be freeform, but there were suggested activities and topics, such as portfolio review, to ensure that every group had something to talk about. The meetings were meant to last an hour, but word on the street is that meetings often ran long, letting their conversations take their natural course. Lainey Phillips, coordinator for one of the groups, appreciates that each meeting “gives young architects the opportunity to develop relationships outside of the workplace that allow for honest and open discussion about the field of architecture.” 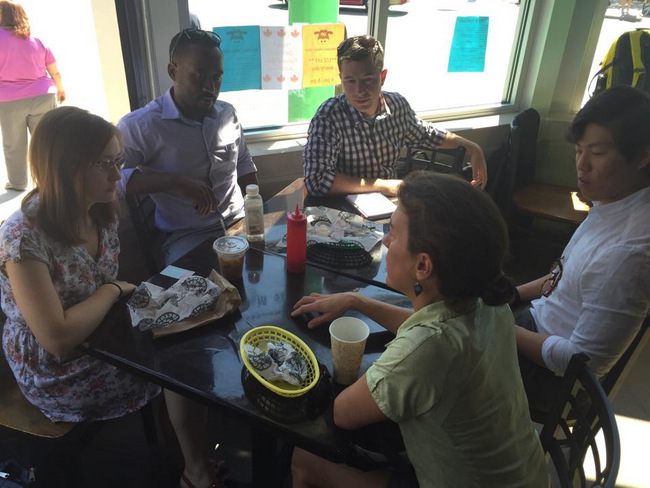 Everyone wants something different out of their relationship with their mentor or mentee. Or, put another way, maybe nobody knows what they want out of that relationship. It is acceptance of this idea that has ended a long dry spell here in Pittsburgh of programming specifically meant to pair mentor with mentee. Instead of trying to set up individuals one-on-one, YAF is organizing events that facilitate informal advice sharing, with the opportunity for relationships to develop organically. It’s what has made PALM so successful in Philadelphia, and what I hope will allow my own program here in Pittsburgh to grow as well.

Another initiative I’ve had the opportunity to implement last year was my own creation,  called “Storey Telling”. My program brings people of different career stages together to share stories from their careers. My suspicion is whenever someone is told that they’re expected to act as a mentor, it puts pressure on them to say something meaningful. Under such pressure, what usually comes out is a variation of platitudes that we’ve all heard before. As someone who is in the market for a mentor, I want someone who has worked through the problems that I’m facing now, not a pull-string doll full of inspirational slogans. To that end, at each Storey Telling event I prompt the speakers with a topic, something to get them to detail the personal way they faced early career challenges. At the first event the topic was “Firsts”, and four guests shared stories from their first job, first client meeting, first big break, and others.

I recorded that first event for my podcast, so listen for yourself and hear why people are so excited for the next event, to be held on February 18th. As befits a date so close to Valentine’s day, the theme will be “Love Stories”. I’m sure you’ve heard “you have to love what you do to be an architect”, so come hear stories from people who have come to love architecture. Or maybe they never did: after all, architecture is a profession that can be pretty hard to love. You’ll also find out how you can participate in the next running of PALM (likely to be held in Fall 2016) as the program continues to branch out across the state. Whether you’re on the giving end or receiving in the mentor/mentee relationship, AIA Pittsburgh’s YAF has a way for you to be involved.