Astorino has created a new executive management team in which Louis P. Astorino has been promoted to Chief Executive Officer; Timothy Powers, AIA is now President of Architecture; John Francona, LEED AP assumes an expanded role as Senior Vice President – Architecture to include Senior Vice President – Marketing; and Michael Brennan strengthens his role from Senior Vice President – Structural Engineering to Senior Vice President – Project Management.  The firm has also won a Citation of Merit in Regional & Urban Design from the American Institute of Architects (AIA) Pennsylvania for the design of “Pittsburgh’s Tribute to Children” honoring Fred Rogers.  Additionally, the  Astorino-designed Children’s Hospital of Pittsburgh of UPMC was recently ranked number 10 on a list of “The 25 Most Beautiful Hospitals in the World” compiled by HealthExecNews.com  an award that comes on the heels of being ranked 51st among the country’s architectural firms specializing in healthcare design, according to Modern Healthcare’s Construction and Design Survey.

IDC Architects is finishing up the architectural and engineering work on a new Nano Fabrication research facility for the SUNY Albany’s College of Nanoscale Science and Engineering (CNSE).  The 283,000 sf facility includes a world-class 46,000 sf class-100 cleanroom, labs, offices, and a data center. For the architectural design of the new NanoFab facility, IDCA is being supported by local firm EYP.  In addition to the NanoFab building, IDC Architects is designing an expansion to an existing central utility building as well as a 200 ft. long pedestrian link bridge connecting the new building to an existing NanoFab building on campus. This is one of the largest projects the company has worked on in which every discipline is modeling their work in 3D and it has been instrumental in completing the work at the fast pace the project has been moving.  The project is currently under construction and expected to be completed by the end of 2012. President Obama recently visited the construction site to tout its value in economic development. 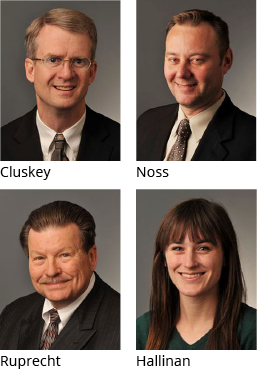 Joel C. Cluskey, AIA, CCS and David E. Noss, AIA, LEED AP have finalized their purchase of RSH ARCHITECTS.  Both Cluskey and Noss had previously shared principal roles and equity positions in the firm with Arthur Ruprecht, AIA who will remain with the firm as a principal architect. Cluskey will serve as President, and Noss will serve as Vice President/Secretary. Additionally, Jane Hallinan joins the firm as an interior designer.  A recent graduate of the Art Institute of Pittsburgh with an academic emphasis on sustainable design, Hallinan interned with the firm for a year before attaining her current position, and will contribute to the firm’s commitment to environmentally responsive architecture by pursuing LEED accreditation.  She has also been selected to represent the Pittsburgh region at the International Interior Design Association’s PA/NJ/DE Chapter Annual Spring Retreat in Philadelphia.

Stantec has been selected by The Pennsylvania State University to design the renovations of the Mueller and Whitmore Laboratories on the university’s main campus at University Park. Together, the two labs serve over 15,000 students annually and constitute the primary lab facilities for the university’s biology and chemistry departments. Both are now too small and outdated to serve the departments’ space, safety, and technology needs.  The initial phases of the work will involve evaluating both buildings’ mechanical and electrical systems as well as the utility infrastructure between the buildings.  The firm has also been awarded the 2012 Edward Kirkbride Award from the Northeast Chapter of the Council of Educational Facilities Planners International (CEFPI) for the design of The Neighborhood Academy, a private school for 8-12th graders who demonstrate financial need. The annual award is presented to the project that best represents the CEFPI principles of educational planning and design in the region’s territory of Washington, DC north through the Canadian Maritimes.

Strada was the recipient of an Honor Award from PA/DE ASLA (American Society of Landscape Architects) for their work as landscape architect and urban planner on the Rivers Casino Riverfront Park.  Additionally, the firm has promoted Sean Beasley, AIA to Associate.  Beasley has been with the firm since 2003, serving as project manager on many of Strada’s banner projects.  Founding principal Ed Shriver has been elected to the AIA’s College of Fellows, recognizing his contributions to the advancement of the profession.