Architectural practice is an increasingly global endeavor, with materials and collaborators far-flung across the globe. Pittsburgh has long been defined by its waves of immigrants attracted to booming industries and continues to be a place of cultural exchange. The local architectural community continues that trend.  For this Columns Q&A, Aleeza Furman and Kyleen Pickering interview Manar Hashem and Will Jodka, two Pittsburgh-based architectural designers who have done a great deal of work internationally.  They discuss differences in living and working as senior designers between Dubai and Pittsburgh, with insights for young designers contemplating big moves in their careers.

Both Hashem and Jodka recently transferred from architecture firm AE7’s Dubai office to its Pittsburgh office—though they have taken different paths to get there.  Hashem was born and raised in Damascus, Syria and worked in Dubai, UAE for fifteen years before coming to Pittsburgh. Jodka was born and attended school in Indiana and worked on both US coasts before relocating to the United Arab Emirates in 2005. He spent eleven years working between Abu Dhabi and Dubai.

What made you first want to work abroad?

Will Jodka (WJ): Having traveled abroad considerably through my teens and twenties, I’d often daydream of packing up and immersing myself in an unfamiliar environment. Studying architecture underscored that desire. I always assumed I would end up in Europe and move on from there, but in 2004 when the principal of the Indianapolis-based firm I worked for mentioned the prospect of international projects in the Middle East, I was hooked. I did everything I could to assist the design directors on the ground in Abu Dhabi. That eventually led to a flight over, and I never really looked back. I got a lot of exposure to massive projects that I wouldn’t normally have access to as a young designer in the United States, and I wouldn’t normally have had the flexibility to massage those projects had I stuck around.

Manar Hashem (MH): If there’s one country that’s good at promoting itself, it’s the United States. When I was a kid, we didn’t know much about American current events, but every time we turned on the TV, we saw the US lifestyle. The United States is the number one immigrant country, the most diverse country in the world.

During architectural school, I became passionate about visiting the US. I was inspired by how varied one country’s history could be. Some of my favorite architects had worked there—Mies van der Rohe and Frank Lloyd Wright, for example. It was truly a place I wanted to be, with all of its history and theory, and having the opportunity to design within the existing texture of Pittsburgh has been a great experience.

How has working in multiple countries impacted your career?

WJ: Working abroad is all about understanding different cultures and building relationships. Having worked in Dubai, I have good communication with the teams abroad. I know consultants and clients well. That makes working on international projects and between international offices much easier because I can focus on getting the best design back in front of the right people without impeding efficiency or creativity. When we arrive at the office in the morning in Pittsburgh, our Dubai coworkers are finishing their day, so as long as there’s good communication and transition, we can get nearly two full days of work into a single calendar day.

MH: Over the last few years at AE7 I’ve found working with offices in different countries creates massive opportunities for me. It has given me the opportunity to visit new cities, and while I’m still able to retain my connection to Dubai, I have the opportunity to expand my network and understanding of new communities like Pittsburgh.

I found that working with different cultures in the various offices differs so much that it took some adjustment. Now I’m used to the peculiarities of each office and their different approaches. I’ve found that visiting the offices really helps me to better understand different capabilities that different offices bring and build solid relationships with leaders across international studios. 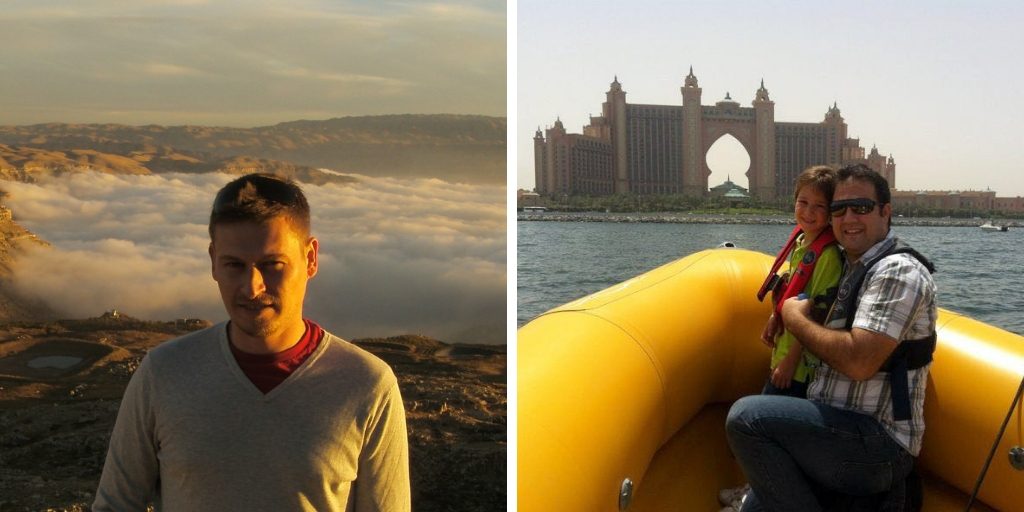 Was there a difference in the design process between Dubai and Pittsburgh?

WJ: It took being in Dubai nearly a year to understand how immense Middle-Eastern projects are. Very little is built of steel, so everything grows exponentially with concrete-based construction. Being a relatively new nation with a track record of experiential building, the UAE allows for design to be a free-for-all experience at times. Rules can be broken if the vision is compelling.

Since returning to the US, I’ve had some exposure to domestic projects, but remained primarily on the those in Dubai. It’s been nearly fifteen years since I’ve worked on projects with timber or masonry construction, for example, and those projects seem small and more personal in comparison. I really enjoy being able to bring different viewpoints to the various charrettes I’m involved in here, exploring creative solutions, and sharing the knowledge I’ve gleaned from working on multiple types of projects abroad.

MH: Projects in Dubai are on a much larger scale, and most of them are fast-paced with lots of changes happening at different stages in order to adapt to both market conditions and the client’s vision. Through my fifteen years of Dubai experience, I gained an understanding of local and international building codes. Dubai has its own code that mixes British and US codes, like ADA and NFPA. That was an advantage I had when I moved to Pittsburgh. I could prevent issues from arising by educating people in my team on the requirements of overseas codes. Working on local projects in Pittsburgh has become an educational experience. I need to educate myself on things like the site, construction techniques, and local materials.

What were some differences that you experienced between the cultures of the two cities?

WJ: I recall Western friends accusing the UAE of having no culture. I found culture everywhere in the diversity of the residents—different people coming together to live, work, and play within close proximity, all the while sharing their varied experiences and idiosyncrasies. I found an incredible support system of expats and their families that felt like extended family.

Moving to Pittsburgh, close culturally and geographically to where I grew up, has been a welcome change, however. It has brought a big improvement in work-life balance. My family and I have made close ties, both socially and professionally. It’s nice to be able to drive to visit family and friends on a whim, without the months of planning and 14-hour flights which I’d become accustomed to in Dubai.

MH: Pittsburgh is a very historic city, with some of the greatest works of architecture around, while Dubai is a cutting-edge modern city. Most of the buildings are new. People always ask me why I moved to Pittsburgh when Dubai is all about new architecture. For me, Dubai is defined by the business and the cost associated with that. It’s hard to find your own personal space there, and I really felt that I needed more time to think and more space to breathe. That’s part of why I decided to move. On top of that, I always felt that in the US, no matter who you are, you have an equal opportunity to succeed.

Do you have any advice for architects looking to work abroad?

WJ: Whenever people ask me how to get abroad—especially to the Middle East—I tell them that they should join a big firm here and do anything they can to be on those projects. Then hopefully they’ll be able to make a transfer with the company. Because of the visa structure with the UAE, it’s very hard to go there without a company or a job already in hand.

MH: Anyone who wants to move to the US or wants to work internationally needs to educate themselves on the culture and laws of the place they’re going. Having experience with an international studio can make you a valuable resource and give you more chances to move around. One challenge I’m facing is taking my exams to become a registered architect in the US, which is something that’s quite important here. In Dubai, an appropriate degree is enough. Don’t worry too much, though—a good designer will do well regardless of where they work.