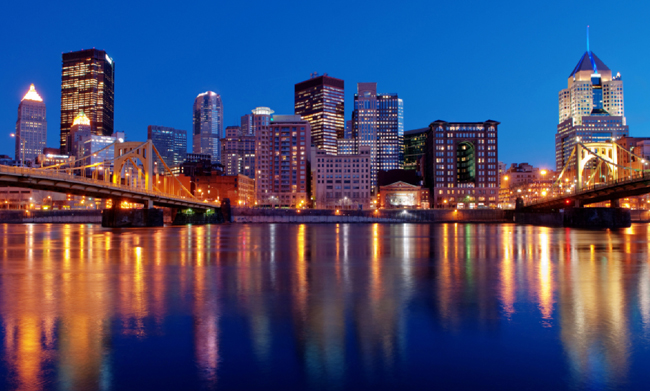 “I love cities, let’s just put it that way.” So proclaims Pittsburgh’s 60th mayor, Bill Peduto. I find myself sitting in his office on a sunny Friday afternoon, alongside Kevin Kunak, Assoc. AIA, to discuss his recent trip to Louisville, Kentucky to partake in the Mayors’ Institute on City Design. The Mayor’s Institute (or MICD) began in 1986, a leadership initiative of the National Endowments for the Arts in partnership with the American Architectural Foundation, seeking to transform communities through design by preparing mayors to be the chief urban designers of their cities. Each session involves 6-8 mayors gathering in a host city with 6-8 design professionals, spending three days presenting design problems or projects to the group and brainstorming solutions and possibilities. What did Peduto think of the studio-like critique experience?

“Intense. Each mayor would be given the opportunity to present a case, then the group of experts would weigh in on it, and then the other mayors would weigh in on it too. Each of us had very different projects, everything from transportation projects to infill, reconnecting cities, downtown development, and the one that I focused on – the Strip District.”

While the redevelopment of the Terminal Produce Building has been garnering a lot of attention this year, Peduto is talking about the broader development of the Strip. “The ability to have riverfront development, development on Smallman Street, and then the preservation of the Penn Avenue corridor as well,” he explains. “Having these three different areas and how it should interplay, the new with what’s already there, without disrupting it. A lot of it focused on design, especially when it came down to the Terminal Produce Building.” Examples of buildings in other cities of similar size and scale that have been able to be preserved were brought to light, as well as discussing the benefits of selling versus leasing, active reuse for the building itself, and the connectivity to the riverfront. “We’re trying to hit upon, really, an ability to enhance the Strip by looking at the Penn Avenue corridor and try not to copy it, but to make something (along Smallman and the riverfront) that wouldn’t be contrasting to it either.”

Each mayor had a design professional assigned to them and their city’s project. Deborah Berke, FAIA of Deborah Berke Partners in NYC was the key expert assigned to Mayor Peduto and Pittsburgh. Are they aware of the project being presented beforehand?

“No, they may have been given some basic information that MICD provided, but the powerpoint of the project itself was presented for the first time at the seminar. So it was a fresh back and forth discussion. And in between each mayor’s presentation, the principles would give a presentation about work that they are doing – you’d learn about Atlanta’s plan to create this massive light rail system, or about the way the sustainability standards in the Philadelphia Navy Yard were able to exceed what had been thought would have been possible and still enhance and use preservation as a component of it. One by one, they each gave the story of what they were doing nationally or internationally. And then we’d go to the next mayor.”

OUT OF THE WEEDS

Of the eight participating mayors, five were newly inaugurated and had all participated together at the Harvard University’s Institute of Politics Seminar on Transition and Leadership for Newly-Elected Mayors, and were able to further get to know each other over the course of this second seminar together.

“Each of us had the same experience, especially the five of us that are new, and that was the enjoyment, to get away and out of the weeds. To talk about real heady issues,” recalls Peduto. He likened it to fantasy camp, or going to spring training to play baseball. “For a mayor who really enjoys urban planning and all of the issues that surround it, to have internationally recognized experts there to talk about your city, it provides a sense of relief, cause it’s great to be there. And practical advice, for free, which is a good thing too.”

And does Mayor Peduto feel that the things he learned will be applicable to this city?

“I think they already are. Discussions that I’ve had with the URA, especially as this Terminal Produce Building issue comes to a recommendation state, are things that I’m hoping will be part of the recommendation. The idea of how we’re going to see that development now become part of a greater masterplan for development along the river… We’re already in discussion to create new zoning that will be riverfront zoning. And holding developers to a higher standard, learning the game plan and the tactics that are used, strategies that have been used in other cities. I think that’s the way to compel the development we want to see happen, along the Allegheny River and the Strip District.”

Jeff Speck, past president of the MICD and author of Walkable City, describes a mayor as a city’s chief designer. I ask our mayor if that’s a role he is taking on.

“I would argue that there are two sides,” Peduto answers, “you can either be the city’s chief designer or the chief destroyer, depending on which way you lean. But I think it depends on your management style. Mine is not as hands on as maybe Mr. Speck is alluding to. My idea is that you hire and appoint talented people who share your vision and you let them get to work. If you want to see where we are going to be focusing, it would be best to look at the Allegheny Riverfront Green Boulevard Plan (http://www.greenboulevardpgh.com) and the standards that are in place for that. There still needs to be a lot more emphasis on what happens away from the riverfront and how it connects to Penn Avenue. 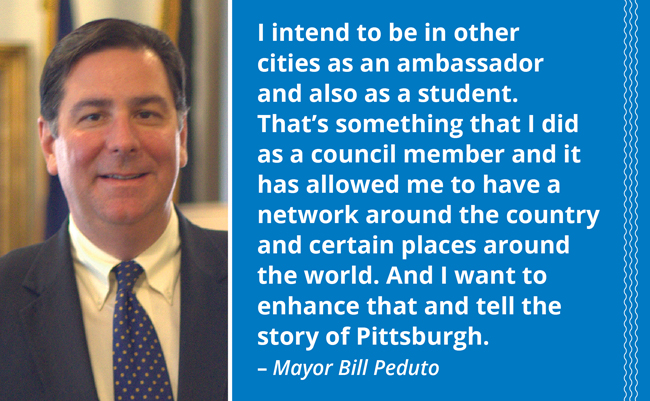 “The biggest challenge isn’t going to be like it’s been for 30 years, which is how to attract developers to come to Pittsburgh. The biggest challenge in the next 10 years is how to manage the growth so we don’t destroy what Pittsburgh is. There’s a good balance right now and having those standards upfront, having them be well-known, and defending them early on will help to give a signal to those that will be coming in from around the country and around the world to develop this city how we intend to move forward. We’re moving very rapidly from a city that has been managing decline to a city that is going to have to learn how to manage growth.”

That seems like a good problem to have, right?

“Yes,” agrees the mayor, “but it’s still a problem. There will be those that want to do it a different way than what the vision is and instead of using a stick to say no, we want to be able to try to incentivize the right ways to say yes.”

Besides the Harvard Seminar for Newly-Elected Mayors and the MICD, Mayor Peduto has been attending a number of conferences that put an emphasis on placemaking. Pro Walk, Pro Bike, Pro Place is taking place in Pittsburgh this month. What, I wondered, could Pittsburgh expect to see as a result of this networking and the exposure that the city has been getting?

“I intend to be in a lot of places. I know that that’s different than what we have seen over the course of the mayors in the past. I intend to be in other cities as an ambassador and also as a student. That’s something that I did as a council member and it has allowed me to have a network around the country and certain places around the world. And I want to enhance that and tell the story of Pittsburgh.

“There will be dozens of mayors from major cities who will be here as part of this conference (Pro Walk, Pro Bike, Pro Place). I want to showcase what Pittsburgh has done, because in many cases what we’ve done to get to where we are now is greater than those who already have a built infrastructure that makes it easier to do placemaking or to create multimode transportation. But at the same time, I want to set a vision about where Pittsburgh can go, and to challenge the other mayors to do the same. I’ll be hosting them, and I intend to use that conference as an opportunity to tell the Pittsburgh story – of a city in transition – as a way to be able to highlight it as what once was one of the wealthiest cities in the world, that had all of these great things built into it, and how that can be adapted into where the city is today, and where it’ll be tomorrow.

“I think for a while there, while we were trying to manage the decline, we forgot to stay in touch with the rest of the country and the rest of the world. But it’s our time to say this is who we are, this is what we’re doing, and we have a lot we can teach you.”

And is there a city or cities that the mayor looks towards, to learn from or be inspired by?

“Everyone has the same ones, right? They’ll talk about Chattanooga for riverfront development, they’ll talk about Portland for transportation… I like smaller cities, so I like Santa Fe. It has a uniqueness that IS Santa Fe, and they don’t try to be something they’re not. Cities in other places? I like Boston because it has an authentic-ness that is America; it traces that history in a real way and is easy to understand. For the West Coast, it’s San Francisco. It’s easy to like because it’s beautiful, but where it lacks is that it’s not accessible or affordable. And that’s where Pittsburgh can learn a lesson… As we become a boom town, how do we not become a Boston or San Francisco that prices itself out?

And as Mayor Peduto continues to move forward, to network and be Pittsburgh’s biggest advocate, we look forward to that change. It’s our time.