An Interview with Danielle Jones, AIAS

Danielle Jones, AIAS is the Midwest Quadrant Director for the American Institute of Architecture Students who originally hails from Western Pennsylvania. She has also been selected as the AIAS representative for the 2016 AIA National Honor Awards jury. Columns caught up with Jones over the summer to ask her about her experiences, both as a student and as an active member of AIAS. 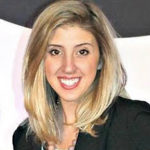 How did you get involved with AIAS? How would you describe your experiences with the organization? Any surprises?

I became involved with AIAS my freshman year of Undergraduate at Kent State University. A very influential classmate named Belana Antar came to me the second week of school and encouraged me to attend meetings and become a member. After the first meeting I began to fall in love with the organization and the leader I was becoming.

Attending my first AIAS National Conference, Grassroots 2013, my involvement on a national level grew; I signed up for the Membership Committee (a standing committee of AIAS National Office). My next conference was FORUM 2014 in Chicago and I witnessed my first National Elections process. After that year I knew that I wanted to be represented as part of the AIAS National Board. Running for AIAS Midwest Quadrant Director in FORUM 2015 Nashville, TN, I experienced one of the most opportunist and life instructing experiences to date. As of now, I have had nothing but eye opening involvements, long lasting friendships and networks, and memories which I will always hold dear to my heart.

Taking on the position of Midwest Quadrant Director or any position on a Board of Directors, local or national, the biggest surprise has been the amount of responsibility placed on your shoulders by peers, administrators, professionals, and other members of the board. Though you are looking forward to a time where you count on being able to “finally” implement your ideas, you need to constantly be thinking and looking at the bigger picture as you take steps forward.

What have been some of your biggest achievements as an architecture student?

Architecture School is hard. Though many people make the statement that you will one day build their home immediately after you tell them what you are studying, architecture is so much more. Looking back one of my most successful years in undergraduate studies was my third year. In the fall, a new professor named Chris Maurer, another student and I worked together on a Masterplan for Kigali, Rwanda. Through the design we started looking at the typical vernacular of the area, values of the culture, and where development would be the most beneficial. In the end we had formulated a model of modular housing through a growth process of restrictive building patterns and sufficient foundation, ventilation, and shading devices. The project was recognized with positive critique and intelligent discussion which was both inspiring and motivating.

In the spring of this same year, I traveled with Kent State University to Florence, Italy to study abroad for five months. The studio was based around developing a visitor’s center in the heart of a Florentine market. While most students chose to fill the space with their own version of “star-chitecture” I decided that a building which spoke more to the historical character of Florence would be better received by the city; a tower. Named Torre Rosa, the structure was eight floors high and finished  with a copper exterior – an attribute which was intended to reflect the red sienna stone of typical Italian facades. At the end of the semester I was awarded the 2014 KSU Student Talent Search award for a commendable design.

Aside from achievements directly correlating with school, I feel that the past four years have really helped me become the woman I am today and I am looking forward to the many years ahead and how architecture will further inspire me. 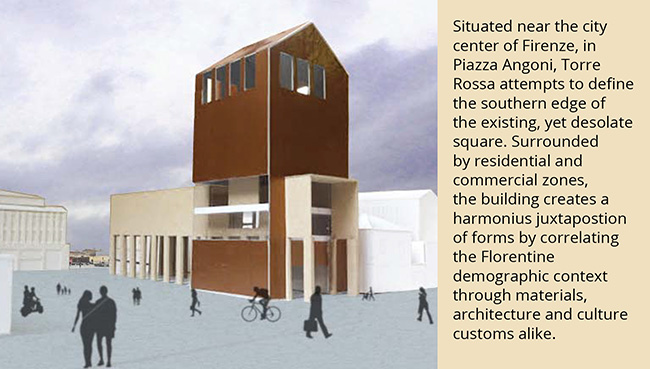 I began my interning experience at Strada during the summer between my second and third years of Architecture school. Given responsibilities on larger projects I immediately felt like I had a sense of belonging to a team that valued my contributions. Strada stole my heart after the first summer and this summer is my third time back, leaving no room for me to work at other architectural firms.

Growing up about forty minutes outside of Pittsburgh and having family who lives in the city, working around the area was an ideal situation. Though not recognized by many, Pittsburgh is also one of the most walkable cities and highly suitable for young emerging professionals.

What are you looking forward to about being part of the AIA National Honor Awards jury?

Gaining a position of the AIA Awards Jury I am most looking forward to the networking skills and connections I will be gaining. I am excited to be involved on a level of AIA operations which most students do not have access to; being able to see projects submitted for review allows me to further my interest and passion for design.