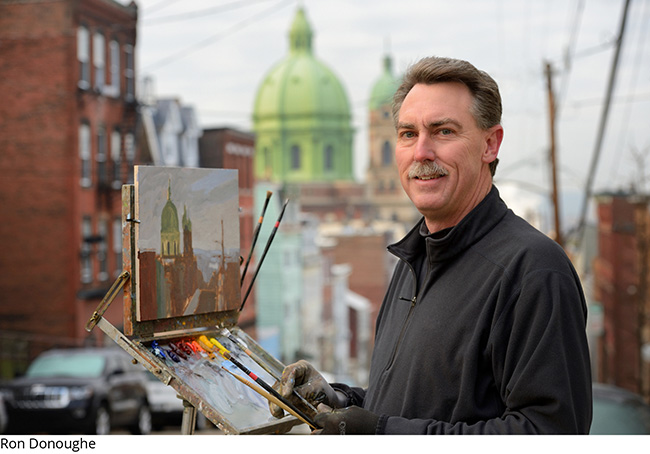 “What is around here that I should paint?” That is the question Ron Donoughe found himself asking a lot last year. In the summer of 2013, he undertook his ’90 Pittsburgh Neighborhoods’ project, committing to paint a scene from each and every one of Pittsburgh’s 90 unique neighborhoods, in alphabetical order, within a year. And he quickly found that reaching out to those who lived there helped guide his brush. “If you humble yourself to ask, it makes a stronger connection to the neighbors, to the community.”

I find myself hunched against the wind as I wait at the backdoor to a large brick building in Lawrenceville. It’s a grey-skied day… typical Pittsburgh. The solid wood opens and Ron Donoughe invites me in and up a winding staircase. We enter his studio, a high-ceilinged open space with huge windows looking out onto Butler Street. The warmth of the radiators plays second to the warmth of the worn wooden floor and walls filled with Donoughe’s paintings, landscapes in all sizes, rectangle after rectangle inviting you to get lost in their textures and colors.

Donoughe has spent the past three decades as a plein air painter – painting directly “in the open air”, what the eye actually sees. “There’s an honesty to direct painting that appeals to me.” While he admits that it hasn’t always been a popular choice, it is one that he has felt drawn to and inspired by, painting almost every single day for the past 28 years. “Chance favors the prepared mind,” he quotes to me, explaining that he keeps his paint bag and easel in his truck at all times, and is constantly scanning his surroundings, always in the moment, looking for what could become his next work. As I wander around, I notice a lot of more ‘traditional’ landscapes – country roads, wooded scenes, streams and knolls and fields. Donoughe explains that having grown up in Cambria County, country landscapes were more familiar to him, that is where he started, that is where his roots are. But having moved to Pittsburgh and living within a city, his subject matter started to shift, and he began recording his urban surroundings, contrasting the city with the countryside. 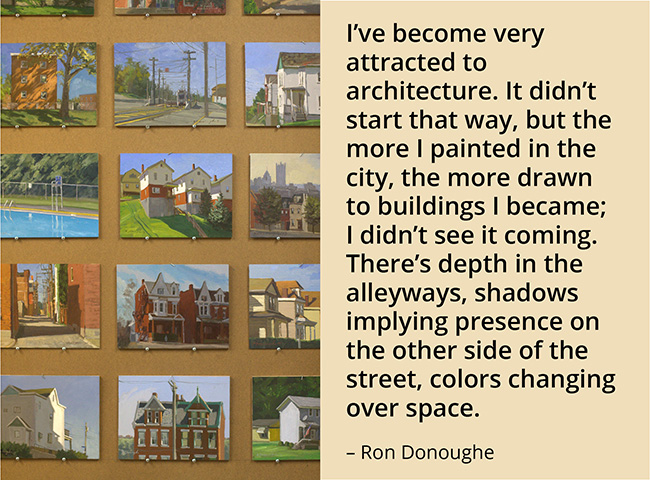 “I’ve become very attracted to architecture. It didn’t start that way, but the more I painted in the city, the more drawn to buildings I became; I didn’t see it coming,” he admits. “Architects informed me on how to see. There’s depth in the alleyways, shadows implying presence on the other side of the street, colors changing over space. I think that artists and architects are doing a lot of the same things – working with aesthetics, technique, and composition to create memory of a place.”

As Donoughe recognized how his interest in capturing more of this built landscape had grown over the years, he came up with his Neighborhoods project, and within a year, he had his 90 neighborhoods captured, 90 moments documented, “like a time capsule, these are moments to document time, our time here.” I inquire if there were any surprises along that year, anything the project taught him? 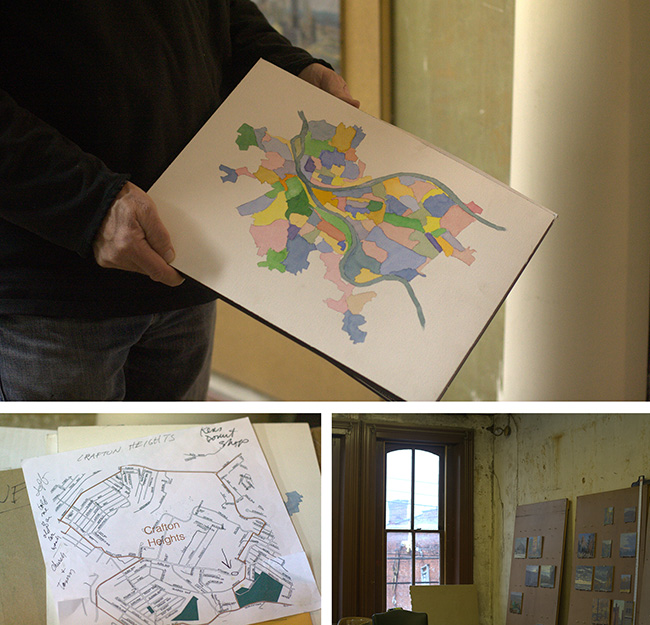 “How much of the city I didn’t know, the nooks and crannies of it,” he answers, gazing out the window at his neighborhood. “I doubt many people know it or have the chance to explore it the way I have been able to. It was a constant surprise, how many areas of Pittsburgh I had never been to; it’s really something to discover so much new in a place you thought you knew.” As he explored and discovered, he also began to see a pattern – due to Pittsburgh’s unique topography, you can see the skyline from many, many places, with Downtown popping out from behind houses or trees, “it really orients you to the city.”

So now what? Donoughe’s year ended in summer of 2014. The project has received a lot of press, with a variety of articles documenting his process and showcasing the result. Ideally, he would love for all 90 paintings to be kept together. “It was conceived and envisioned as a series, the whole is greater than the sum of the parts.” For now he is working with fellow Lawrenceville artist and graphic designer Paul Schifino on a book version of the project. He just wrapped up an Indiegogo campaign (supported by the Pittsburgh Center for the Arts) to help ensure that the book can be printed and published here in Pittsburgh. (That campaign was funded 288%, giving you a sense of the connection people feel to this project.) And on the evening of Friday, May 15th, the Pittsburgh Center for the Arts will hold the opening reception to the 90 Pittsburgh Neighborhoods exhibition, which will be on display through August 9th. Meanwhile, Donoughe continues looking at the world around him, continues seeing his landscape as moments in time, and continues to paint.

Still interested in learning more? Visit Ron Donoughe's website or his 90 Pittsburgh Neighborhoods blog. You can also view some of his selected works featured in the digital gallery on AIA Pittsburgh's homepage.