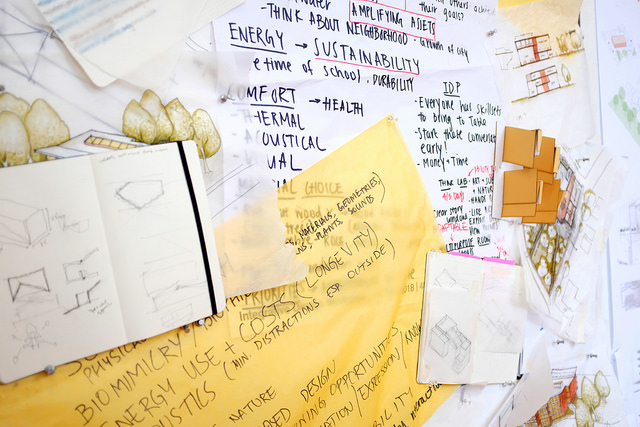 This past fall, the Carnegie Mellon School of Architecture (SoA) inaugurated EX-CHANGE, an end-of-semester exhibition celebrating student work. On 4 May 2018, the school opened the second EX-CHANGE, which featured a week-long exhibition followed by a day of discussions with Ming Fung, AIA, principal, and co-founder of Los Angeles-based Hodgets+Fung and director of Academic Affairs at SCI-Arc; Mitch McEwen, assistant professor at Princeton University School of Architecture, principal of McEwen Studio and co-founder of A(n) Office; and Amy Kulper, associate professor and head of the Department of Architecture at the Rhode Island School of Design.

Discussions on Saturday, May 5 covered issues of pedagogy and practice framed by questions posed by each studio and program. These varied from questions of site and place to assembly, to user experience, to community engagement, and culminated with a roundtable discussion moderated by Molly Wright Steenson and Adam Kor (B.A. ‘18) that brought the discussion back to the pedagogical structure of the school’s programs.

The lively opening in the College of Fine Arts revealed a wide range of student work on display, from first-year undergraduate studios to posters with PhD research. Rather than focus on individual projects, the spirit of EX-CHANGE is to emphasize the collective inquiries of studios and programs. The show was organized into three sections: Core 6, showing work from the first three years of the undergraduate programs; Advanced Synthesis Option Studios (ASOS) showing upper-year undergraduate work; and Thesis, which included work from the B.Arch and graduate programs. 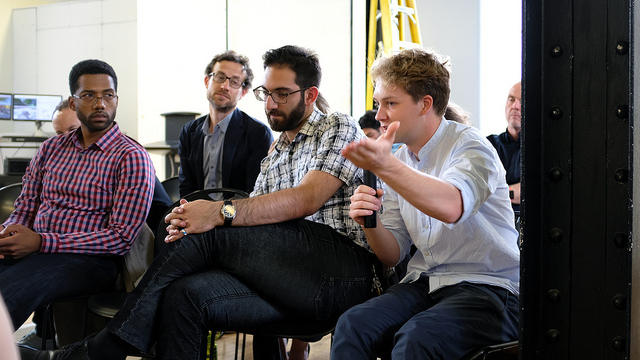 The conversations on Saturday’s program brought a more critical outlook, featuring voices from within the SoA and the broader architectural community. Fung, Kulper, and McEwen each attended one of three concurrent morning sessions packed with student presentations based on collective “critical questions.” Conversations were bolstered by respondents from other CMU faculties and local offices including Kent Suhrbier, Bea Spolidoro, AIA, Spike Wolff, Ray Gastil, Akhil Badjatia, Dan Lockton, Jake Marsico, and Daragh Byrne.

The afternoon roundtable offered a platform for, in Kulper’s words, “a poignant institutional moment” of reflection guided by the visiting critics’ perspectives. One topic discussed at length was the SoA’s Core 6 curriculum. Fung expressed a desire for a stronger sense of continuity in successive projects developed by students, particularly in the first year. There was also tension between practicalities of design and imaginative design freedom. Fung was impressed by the students’ ability to present the work so early in their careers and sensed that this stemmed in part from the school’s intent to address the entirety of the educational goals prescribed by the National Architectural Accreditation Board. McEwen observed that while many of the “drawings are about siting and situating” and other practical considerations, “many of the models are very abstract and show a different mode of thinking.” She went on to say that “I really appreciate that the real is valued so much here. Engaging with the real, getting something physically built, getting a neighborhood changed…no one’s just working on images.” Kulper continued the conversation on abstraction, expressing her appreciation for how the SoA maintains an “institutional identity” while still engaging in a culture of making. 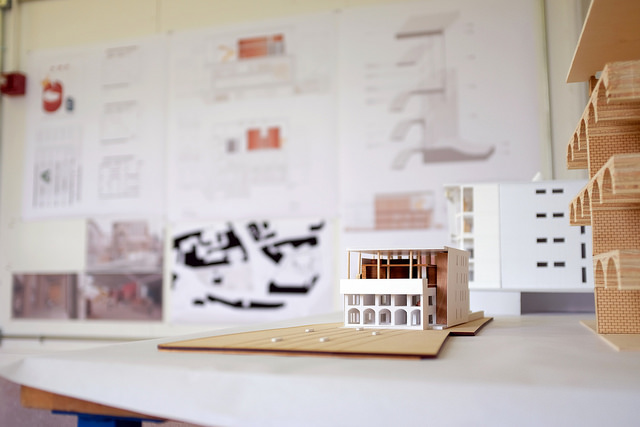 A large part of the conversation focused on the question of synthesis, which Kulper regarded as the most interesting aspect of the day for her. “I saw an incredible diversity of work that moved from Palladio and Scarpa in one room, to plaster fabrication and questions of historical and contemporary techniques of plaster fabrication, to incredibly contemporary issues of augmented reality…the notion of synthesis ran really beautifully throughout the studios,” she said. Guests commented on the value of being able to engage with all the different studios in the same space and conversation. The ASOS seemed to be particularly accomplished at this, as they each adopted a different way of referencing the past. Kulper noted that there were “various registers of synthesis” as well—in terms of collaboration within studios and with the community, as well as in terms of analog and digital media. The frequency and quality of collaboration between students, Kulper summarized, was what enabled “a studio designing affordable classrooms to engage with one designing an opera house in Romania.” 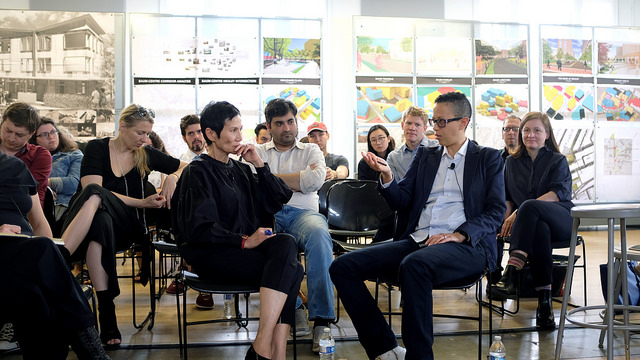 As the Reflection Round Table wound down to a close, Fung addressed the elephant in the room: what is the future of architecture? While the question drew some speculation about the role of education in crafting that future, McEwen commented on the anxiety of futurity based on her recent conversations with theorist and scholar Homi K. Bhabha. We’ll never know who the subjects of the future are, she explained, but that uncertainty, or ambivalence, can become a “place for action.” Her overarching advice to students is to embrace that uncertainty and not feel pressure to execute everything while continuing to embrace the real. Kulper expanded on that idea, asking whether the ways in which we each envision the future are based in our own cultural and social upbringings and are constantly changing: “the future looks really different right now.”

The conversations, ideas, and questions from EX-CHANGE were so rich, more of them will be recorded in a forthcoming publication to be published this fall by the SoA.

Chitika Vasudeva is a rising fourth-year Bachelor of Architecture student at the SoA and the upcoming AIA/YAF Liaison for AIAS this coming 2018-2019 Academic Year.  This article previously appeared on the CMU School of Architecture website.