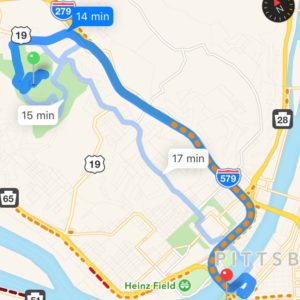 I’m not ashamed to admit that I don’t have the best sense of direction.  Especially lately, when my day job has taken me to little out-of-the-way places that are hard to find, and sometimes even harder to find my way back from.  I’ve become increasingly hyper-reliant on the GPS and navigation apps on my phone to get me pointed in the right direction.  Oddly enough, sometimes even when I know exactly where I’m headed (back to the office, or, occasionally, home), I’m just not quite sure of how to go about getting there… because I’m starting out in unfamiliar territory.  That’s when the app is the most valuable, helping me to get myself oriented and make the right choices, instead of heading off in the completely wrong direction.  Lately, I’ve noticed that the app will provide at least three options of getting me from point A to point B, some of which I would never have even considered…  the path less traveled, if you will.  Not all who wander (or rely on GPS) are lost.

We are in a state of transition with the Architects’ Registration Exam, as version 5.0 gears up for its formal launch on November 1, 2016.  Never before have there been so many options available to a candidate for licensure.  Three different routes, to be exact.  Which one a candidate might choose to take depends on a lot of factors…

Option 1: The Scenic Route.  Start – and finish – the exam process under ARE version 4.0.  (Tried and true, seven total exams.)  If you have time on your hands, stick to the scenic route.  It’s familiar territory to you — the tried and true ARE version 4.0, which has been the current version of the exam for the better part of the past ten years (it launched in 2008).  There are the seven divisions consisting of the familiar question types (multiple choice, fill-in-the-blank, and those pesky check-all-that-apply) and even more familiar graphic vignettes. ARE 4.0 requires 33 1/2 hours of sitting time, at a cost of $1,470., and won’t be officially retired until June 30, 2018, meaning that eligible candidates still have over eighteen months to finish testing under this version.  It’s a longer path but there are plenty of sights to see along the way — AIA-Pittsburgh’s fully stocked lending library of study materials, for example. (Public service announcement:  On October 31, unless you’ve already received your authorization to test, this road closes forever.)

Option 2: The Fast Lane.  Start – and finish – the exam process under ARE version 5.0.  (New territory, with six exam divisions total.)  Back roads might be great for some, but others prefer a more manageable route. If you want to get where you’re headed more efficiently, you should definitely take the highway. When it launches, Version 5.0 will consist of six divisions and a total sitting time of 25 1/2 hours.  Since there’s one less appointment, the cost is also $210 lower.  However, bear in mind that a new path means somewhat uncharted territory, which in this case means new item types — drag and drop, “hot spots,” and case studies that will incorporate a little bit of everything.  (The basic content of the exam is not significantly changing, just undergoing a reorganization — a reshuffling — between the six divisions of the test.)  But there’s always bound to be some heavy traffic — dedicated study materials aren’t readily available just yet, nor is there a peer group of fellow test-takers to rely upon.  And because there isn’t enough qualitative data for the results just yet, it might be months before early adopters actually receive their scores.  Much like that morning rush-hour traffic, there isn’t much that can be done about it.

Option 3: The Great Race.  Start the process under version 4.0, self-transition, and finish under version 5.0.  True Pittsburghers know that, while the Parkway might get you there more directly, it’s not always the fastest. These folks know that it’s better to sneak down a few side roads, missing some log-jammed traffic in the process, and then jump on the highway an exit or two further down.  If this sounds like you, then you should definitely consider the “hybrid” version of the exam, which NCARB is making available through the Credit Model.  You will take a grand total of five exams (three from 4.0 and two from 5.0) and spend 22 1/2 hours sitting in a testing center.  This approach also costs less — $1,050 for the five appointments.  It’s also a very well-planned mix of divisions from 4.0 and 5.0, allowing candidates a taste of both active versions of the exam.  Start with the recommended “big three” divisions of 4.0 (CDS-SPD-PPP) while the kinks of 5.0 are getting ironed out, then hop onto the highway when you feel the time is right for you.  (Watch for posted detours, though — this path will also only be available until October 31, unless you’re already eligible to test.)

This might seem a little confusing to some, but rest assured that it’s really much simpler than it sounds.  The truth is that, with three distinct testing options available, this is the best possible time to be preparing for the ARE. The caveat, though, is that two of these options are only available to candidates who earn their eligibility to test prior to the launch of ARE 5.0 later this year, on November 1, 2016.  In other words, even though 4.0 will still be active, once 5.0 launches, it will be the only version of the exam available for new eligibilities.  Even if you don’t feel that you’re ready to start testing, consider this:  In 18 months, an exam candidate could (a) start and finish ARE 4.0, (b) start under 4.0 and finish under 5.0, or (c) elect to simply begin under 5.0.  Three different routes, as opposed to one , each taking a slightly different path, but still getting you where you need to be…

…but only if you have requested your eligibility to test, that is. As long as you’ve done that, you will have opened up a significant amount of opportunity that has never before been available to test candidates (and may never be again).

Ready to start?  Interested in learning more?  Join the YAF for their annual “Intro to the ARE” session, where we will talk about the different testing options in detail, as well as our plans for a revamped ARE Review Series that will benefit all exam candidates, no matter which route they choose to take.