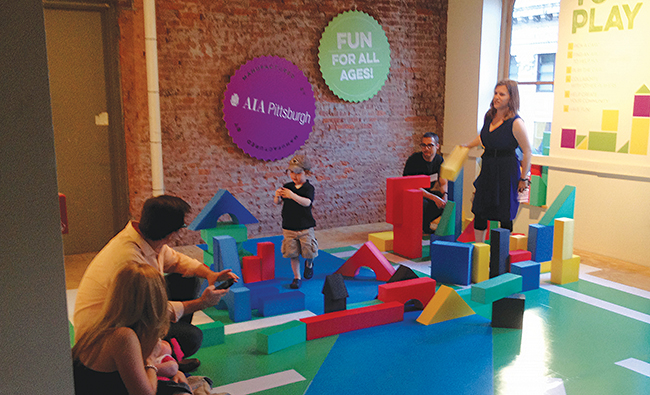 Design Pittsburgh. It’s a design competition. An awards ceremony. A gala. The one time each year you catch up with some of your colleagues. But it’s also something more. It is AIA Pittsburgh’s yearly opportunity to expose architects’ work to a wide variety of audiences, to raise the profile of architects in the public’s eye. How to fill such a tall order?

Nine years ago, AIA Pittsburgh moved the Design Pittsburgh exhibit to downtown and became a stop on the Pittsburgh Cultural Trust Gallery Crawl, exposing hundreds of ‘crawlers’ to the array of architectural designs submitted for the competition. A few years later, the entries were made available for viewing (and voting) online, bringing in thousands of unique page views over the course of the month-long exhibit. The public is viewing local architects’ work, they are picking their favorite projects, envisioning these new spaces. But how to convey the impact good design makes in our day-to-day lives?

Good design is important to everyone. We can all agree on that. If asked, could you explain why, or how? Could you put into lay terms the impact good design can have in one’s everyday life? The Design Pittsburgh Committee came together last summer thinking about exactly that, knowing that our stop on the Gallery Crawl would introduce hundreds of people to this idea, and that they would have mere minutes to grab the public’s attention and make a lasting impression.

“We wanted to conceive of something that could get the general public interacting with space and building/design; allow them to walk in our shoes for even a few moments to understand design. We wanted them to be able to walk in and understand even the smallest moves would impact entities on several scales,” explains Vincent DeFazio, Assoc. AIA, a committee member who helped create Build YOUR Burgh. What initially started as a table-top idea of building blocks or sketches quickly expanded into larger blocks on the floor. Once on the floor, where would the blocks go? How would people interact with them? Committee chair Alan Schlossberg, AIA imagined a participant being allowed to move a single piece, to see how that one move could impact or affect its surroundings – for example, how a tall block (or building) will overshadow a much smaller one. Someone else suggested a game board-type layout, which led toward designing a ‘city’ or ‘community’ in blocks. “Initially we had imagined this a bit more abstractly (possibly let them discover ‘space’ through building a room) but deduced that may be too farfetched… Instead we wanted to get them involved in making changes they could see almost immediately. During the process it felt as if there was a more abstracted side along with a much more literal interpretation of what we were discussing. We began speaking about cities and their relatability to most people moving through the exhibit, thus the marriage between building ‘YOUR Burgh’ and the more abstracted idea of space occurred.”

Even after the idea of large building blocks was established, there was still a lot of fine tuning to do. What would the people do with the blocks? What could be asked of them in a playful and engaging way, to help guide the conversation towards the importance of design? Game cards were created, with each instructing the ‘player’ to add or remove a block from the game board – a basic city mapped out on the floor, complete with a river to consider. Coming up with a final version to present at the Gallery Crawl allowed the volunteers to “really understand the complexities of what we do and how we need to convey ourselves differently to the public than when we communicate among one another,” according to DeFazio.

The day of the Gallery Crawl was sunny and pleasant, which would likely reflect a big crowd come evening. Within moments of the Crawl officially beginning, people began to wander in off the sidewalk, intrigued. After months of hard work and consideration, it was time to see if the public would want to build their Burgh.

“We had hoped people would follow the game cards/board and begin to construct an actual city seeing how even a single block can alter the direction a city (or space) takes,” says DeFazio. But as is often the case, what is hoped for is not necessarily what actually happens. Emily Putas, AIA volunteered to help guide the game for the first hour of the Gallery Crawl, and recalls that during that time the only participants were children. “They ran in and started building whatever they wanted. We tried to facilitate them building in response to the site – like putting bridges over the water or not blocking too many roads. Once there were more kids in there than facilitators, they were just building as big and tall as they could. It was interesting from an observation standpoint to see how quickly they shifted from building to destruction, and how contagious it was across the kids… as if building is a task that requires thought and care and destruction is based in emotion and reaction. In that way, it became a neat little social experiment. I had to get out of my architect-brain and find ways to convince them to follow a path and not build willy-nilly.”

As the evening grew later and less children were participating, the facilitators saw that what continued to happen went back to the initial discussions and ideas of simply building. “People were interested in seeing the blocks transform from their simple units to become something much more, many times much taller than they were,” DeFazio observed. “At the end of the day, I’m not sure many people even played the game. But that’s okay, we observed many simply constructing something out of nothing. It was very intriguing to see how the game mat became just a piece of floor art, disregarded and strewn to the side.”

The whole process was a lesson in communication – first, architect to architect, among the committee members and volunteers, creating an idea and seeing it to fruition. Then, architect to the general public, working with the Crawlers to engage them to think about design and creative solutions. Putas could envision a similar set-up again, but with “much less programming,” allowing for more basic experimentation, or “for the adults, maybe something similar to the Build YOUR Burgh but on a big table with smaller pieces, which would allow a more precise mind to make moves, almost like a chess board.” Regardless of who was playing, or how, the Build YOUR Burgh exhibit was considered a success. After all, any time you are able to convince hundreds of grownups to work together, losing themselves in a rousing game of blocks, you have won.