I have been known to take in a play or two and not just because my wife, Angela, has a theater degree; I’m a man of refined taste, after all. I have seen quite a few plays and musicals here in Pittsburgh but until Valentine’s weekend I’d never made a trip to see a play. I just couldn’t imagine a scenario in which I could be convinced to drive several hours just to see a play. Then Angela found out that two of theater’s all-time greats, Sir Patrick Stewart and Sir Ian McKellen, would be performing two different comedies in repertory, No Man’s Land and Waiting for Godot. Not only that, but giving her the tickets on Christmas for the shows on Valentine’s Day allowed me to kill two holidays with one gift. Consider me convinced.

I’d give you a critical review of the production but that would be pretty useless. First of all I’m not qualified, and second of all it would be enormously boring because the review would go something like this: Both plays were flawless in all phases. End of review. Boring by itself, doubly so because of a lack of pictures. So instead I thought I’d talk a little bit about theater architecture and work in some eye candy as well.

There are many components to a traditional theater but the one I want to focus on in this post is the proscenium. This is the arch that is built around the stage that frames the performance and keeps all the messy parts and pieces out of view of the audience. I’m fairly obsessed with “framing” (it was a frequent source of inspiration in architecture school), which is selectively allowing and denying views in order to create an experience. The proscenium is perhaps the clearest example of a frame, facilitating the suspension of disbelief by hiding all of the inner workings while at the same time focusing attention to the action on stage. It’s also a great place for some design creativity, too. Just take a look at the Cort Theatre, where we saw No Man’s Land and Waiting for Godot: 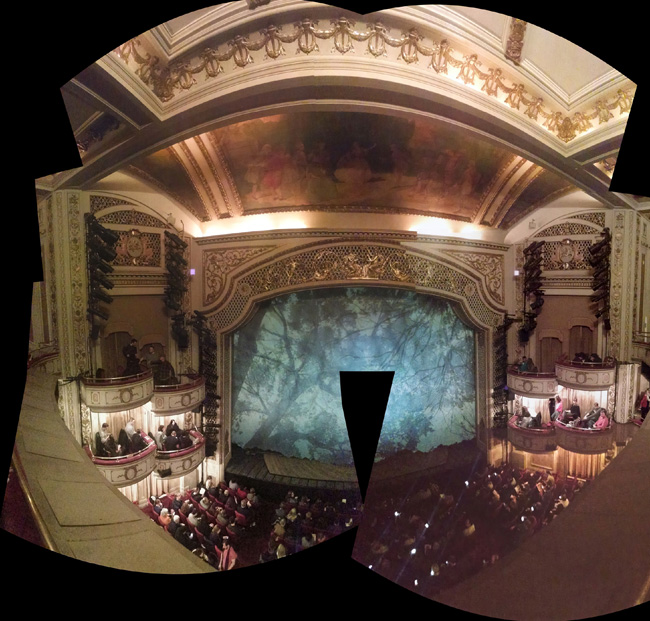 You’ll notice the plaster detailing on the columns and boxes at the extreme left and right but the most intricate work is saved for the proscenium. Dentils define the upper limit, below which is some gilded plaster moulding, and below that is an intricate frieze over perforated plaster treated with art glass which used to be lit from within. Above all that is a curved ceiling with a detailed painting of the gardens of Versailles. Thomas Lamb designed this theater as well as many of the others in Times Square, and the details reference 18th century French architecture. (note: I didn’t know all of the history of the theater when I wrote the earlier version of this piece, so credit goes to my knowledgeable commenters “Angela” and “Joseph ODea” for pointing me in the right direction). In addition to designing unique theaters like the Cort, Lamb worked with Loew’s Theatres back when Loew’s was a chain of vaudeville houses. “Loew’s Theatres” is known as “Loews Theaters” today, and they evidently lost their respect for architecture along with their apostrophe. Witness their installment at the Waterfront which, instead of referencing French palaces in plaster, appears to reference Disney’s Alladin in fiberglass. But this is supposed to be about the proscenium, like this one at Pittsburgh’s own Heinz Hall: 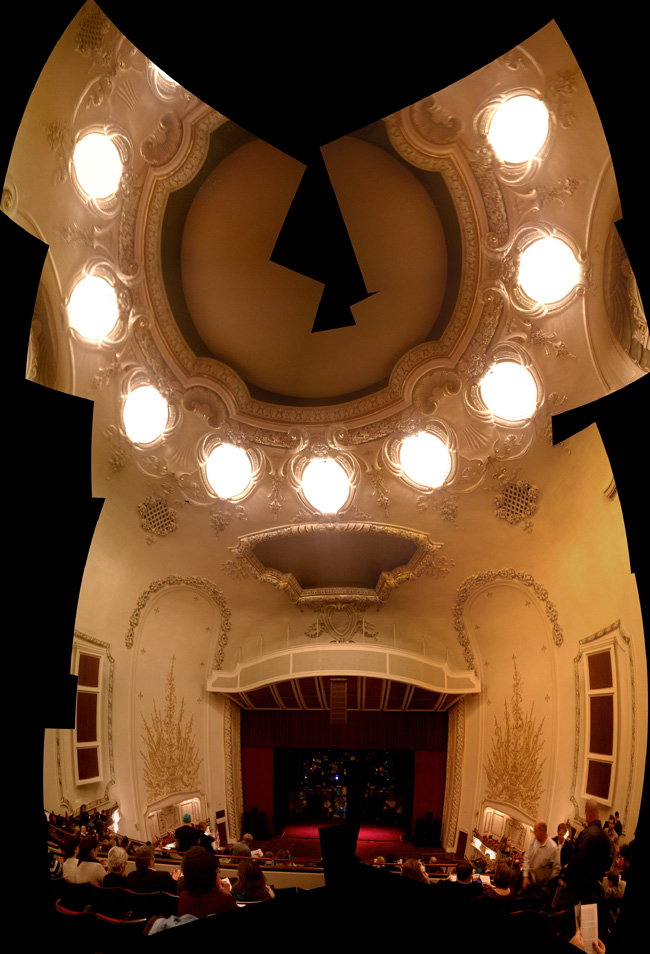 I really like the monochromatic color scheme at Heinz Hall. Everything is done in white with some subtle gilding here and there. Most of the detail comes from the work in plaster at the sides and ceiling. Theater design is finicky work; I hesitate to criticize the bit at the top of the proscenium that was clearly added later because the shape makes me think that such an addition was needed for acoustical reasons. That being said, I really wish we could still see the opening as it was originally, I’d love to see how the plaster work at the sides of the opening resolves itself at the top. It’s worth noting the start of a trend, which is that the original design of these theaters is compromised in some way to address modern shortcomings, acoustics here and elsewhere, lighting above at the Cort. I do love the ceiling at Heinz Hall, though, coming together at the top to imply a great oculus. Speaking of ceilings, the Benedum Center has one of the most famous ceilings in town: 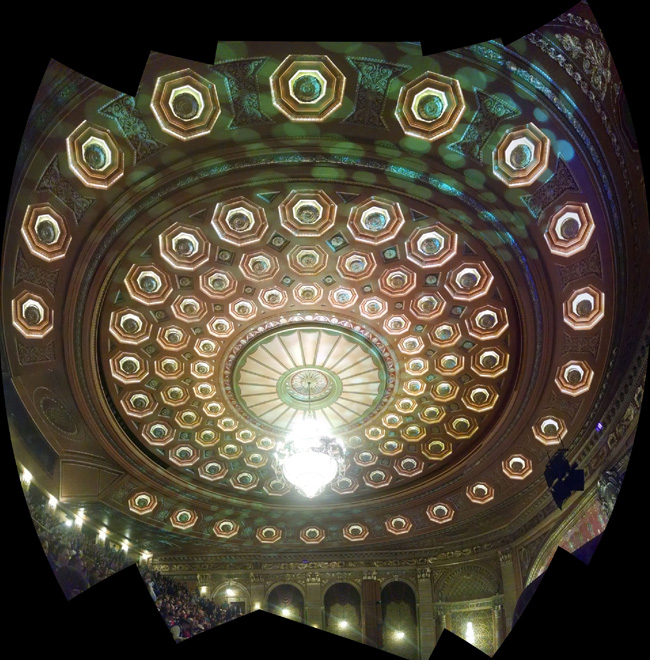 … but I’m getting off track again. We should be looking at the proscenium: 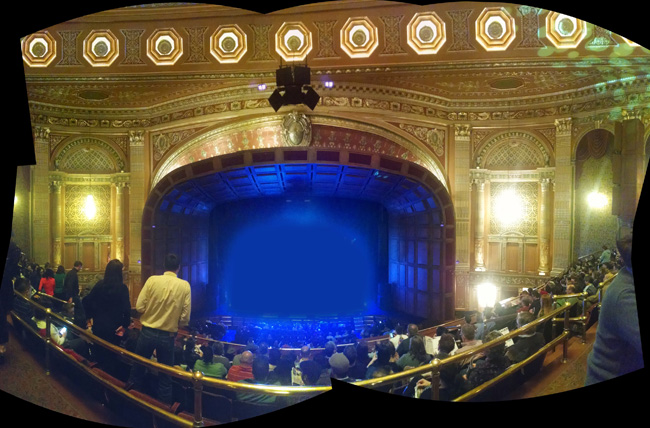 There’s a lot of the familiar elements like gilded plaster work, but the introduction of some red makes this design feel like the most regal of them all. Unfortunately, it’s really hard to talk about the proscenium itself in this case. We only see the very top of the arch and some infill panels similar to those we saw at the Cort. The inside portion of the arch is completely obscured by a supplemental acoustic proscenium. Again, hard to fault this because after the lights go down you need to be able to hear the people on stage. It’s just a little surprising to see it taken to such an extent given that a restored theater like the Benedum (formerly the Stanley, a movie theater) relies so heavily in historic authenticity for appeal. The renovation that produced the acoustic baffles was completed nearly 30 years ago; I’m curious if there are any new technologies that would allow some more of the original architecture to shine through.

So there you go, for those looking to get rich quick there are a lot of four-dollar-words up there. Hope you were taking notes. I’d love to hear your theater stories and your thoughts about the proscenia above.

Spell check says “proscenia” isn’t a word but I beg to differ.