In the aftermath of the startling collapse of the Fern Hollow Bridge in January of this year, local architects are speaking out about the importance of good design. The sight of the bridge crumbled into the ravine below was a shock to Pittsburgh and beyond, but architects quickly took the opportunity to advocate for a well-designed bridge as a critical part of rebuild considerations. Over the past month, Pittsburgh buzzed with speculation on what this event revealed about the state of infrastructure in our city. The loss of this major roadway opened up a Pandora’s box of concerns. As traffic is rerouted to neighboring areas, the influx of vehicles presents residents with new safety issues and disruptions to their daily routines. For nearby businesses used to the exposure the Fern Hollow Bridge offered them, the economic implications are significant. Pittsburgh residents began to more closely examine the bridges they cross every day and voice concerns over what they were seeing. But as Pittsburghers wondered if they should be feeling nervous about their daily commutes, architects, equipped with a unique understanding of the myriad of ways that a community interacts with its built environment, seized an opportunity to advocate for good design in the City of Bridges.

Take a look at what three AIA Pittsburgh members had to say about the future of the Fern Hollow Bridge:

“Design is essential to the rethink of infrastructure.”

For Christine Mondor, FAIA, Principal of evolveEA, co-chair of Mayor Gainey’s Infrastructure Transition Committee, Chair of the City of Pittsburgh Planning Commission, and a member of the AIA Pittsburgh Board of Directors, physical infrastructure and social infrastructure are two sides of the same coin. In an essay for the evolveEA blog, Mondor details the numerous factors that need to be considered when  pursuing good design, like long term stewardship, the rapid shift in technology, equity and environmental justice, and generational design.

“Infrastructure is a design problem that should be continuously revisited and reinvested and as designers, we need to establish our role providing innovative, aesthetic, understandable, and long-lasting design throughout a project’s life-span.”

When our infrastructure fails, the way forward is not as simple as it may appear, but, as Mondor advocates, the opportunity to elevate good design through resilient, creative, and inclusive solutions should not be overlooked.

While some architects let their imaginations flourish with thoughts of what is possible, others took their message straight to our local government officials. On behalf of the Pittsburgh Art Commission, Andrew Moss, AIA, owner of mossArchitects and Chair/President of the Commission, penned a letter to Pittsburgh Mayor Ed Gainey and Pennsylvania Governor Tom Wolf, urging them to take the time to closely consider an intentional design of the new bridge.

“The new Fern Hollow Bridge is a tremendous opportunity to contribute to our legacy as ‘The City of Bridges.'”

Signed by other members of the Pittsburgh Art Commission, the letter echoes many of the sentiments mentioned above, such as a desire for innovative and long-lasting design and prioritizing the social fabric and interconnectedness of our neighborhoods.

“We recognize time is of the essence as this bridge is an important component of the city’s infrastructure; however, this new bridge will be standing for decades and we must consider the future impact it will have. Let’s not rush this process but rather focus on creating a structure that will make Pittsburgh proud now and for future generations.”

“What are the possibilities?”

Speaking of rapidly-changing technology, social media now offers designers a platform to discuss, share, and innovate. When a Reddit thread posed the question, “Fern Hollow Bridge Replacement, what are the possibilities?”, Walt Haim, Associate AIA, of Rothschild Doyno Collaborative and a member of the AIA Pittsburgh Young Architects Forum, got to work visualizing the potential solutions. While some of the suggestions would be hard to realize, these drawings show the ingenuity and broad thinking that an architect brings to such a project.

“This question serves as the headline for these six sketches. They were created as a fun impulsive side project and invite the audience to react to the drawn iterations, consider a range of possibilities from the conventional to the fantastical, and then imagine their own possible outcomes. The drawings themselves serve as a catalyst for discussion, engaging the visual creative ambitious side of our minds,” Haim writes. 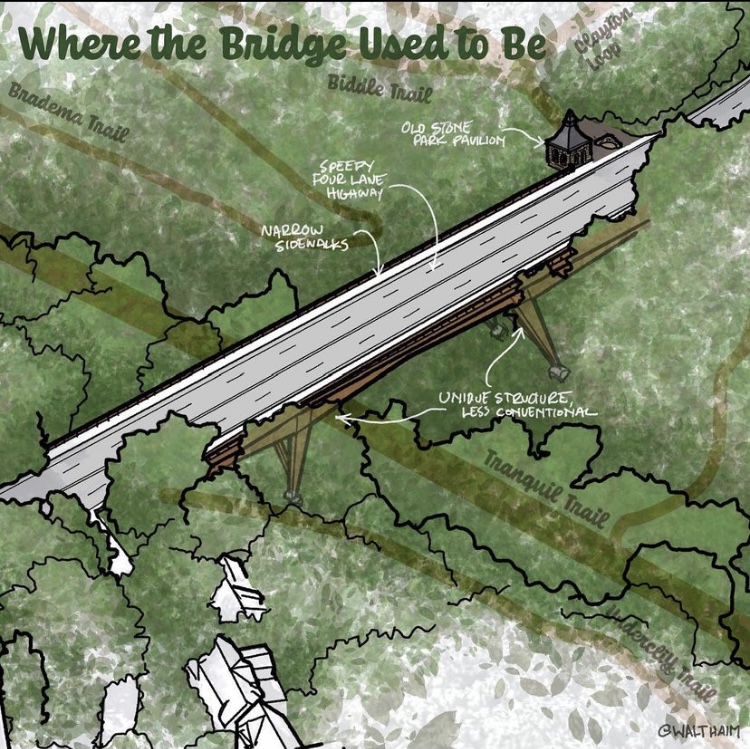 “Where the Bridge Used to Be” 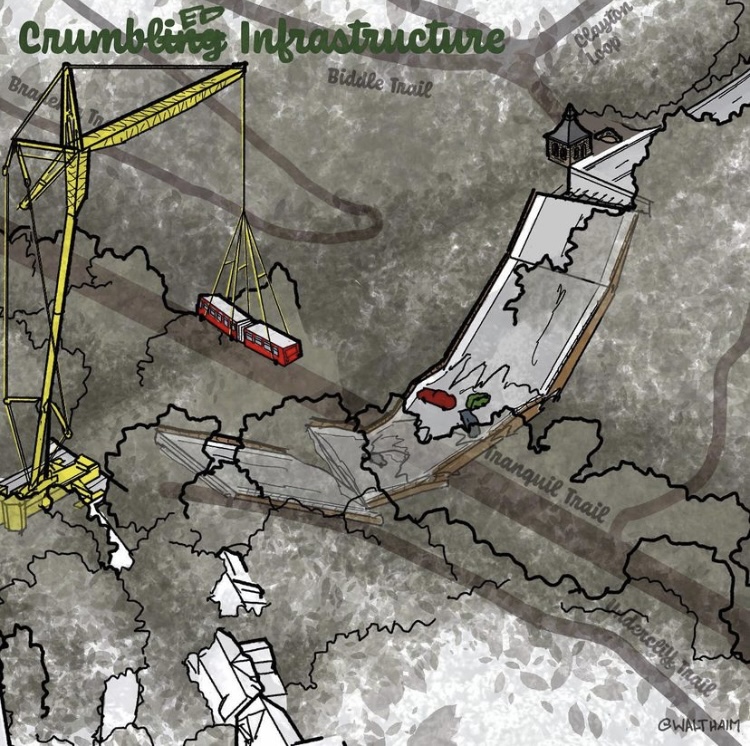 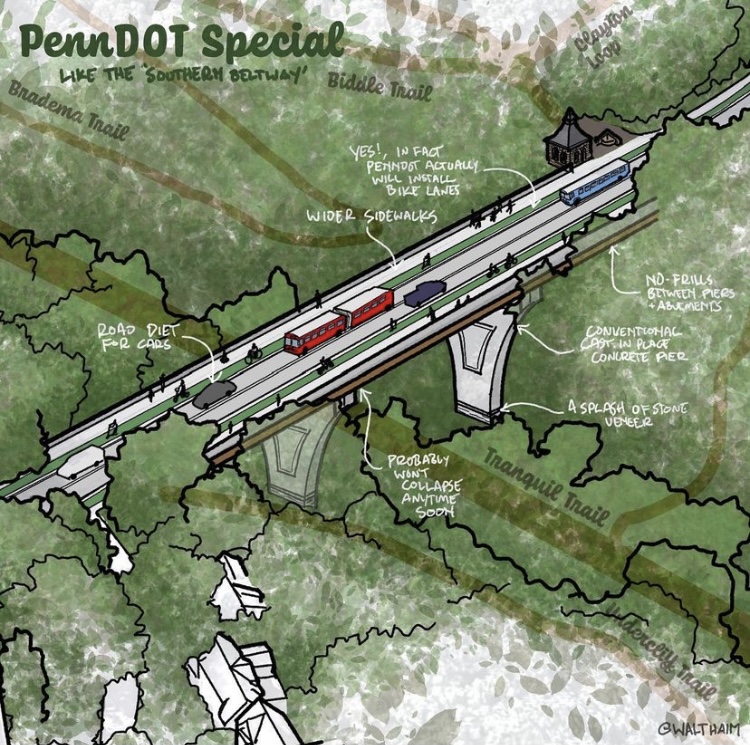 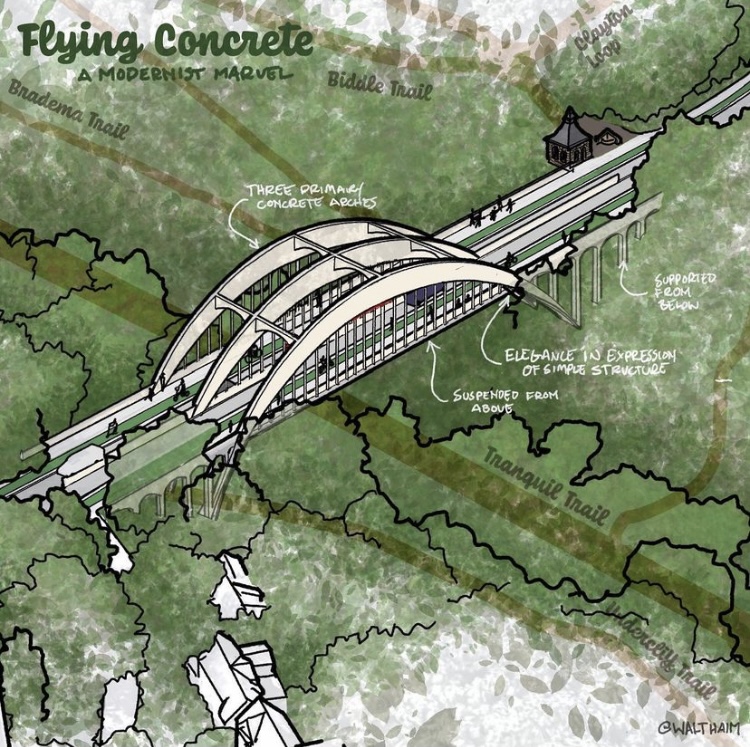 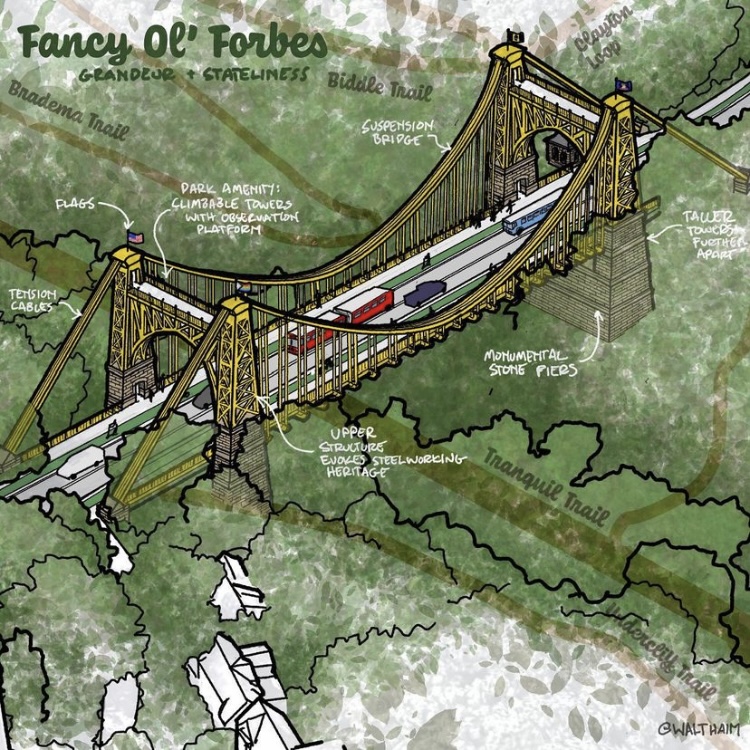 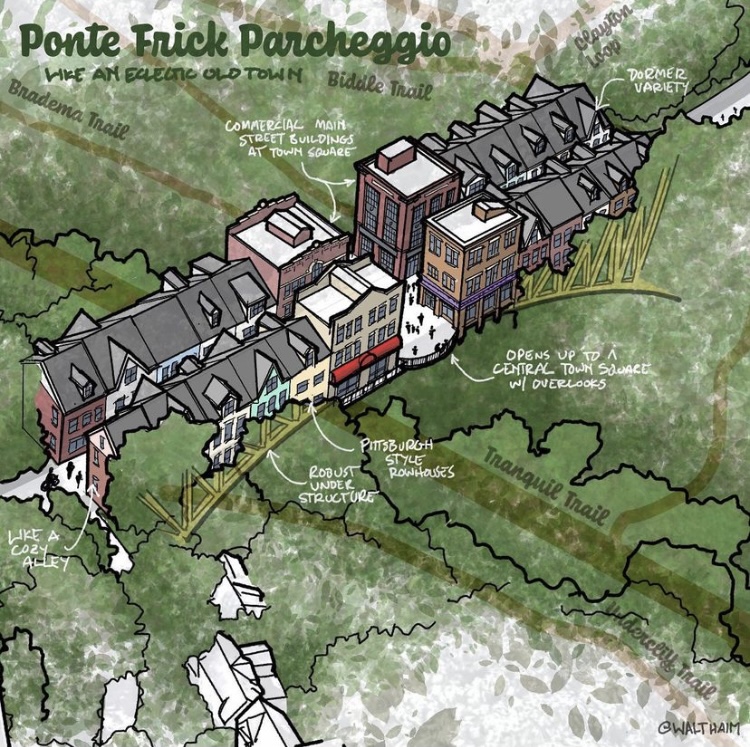 Haim’s social posts launched a conversation that drew numerous additional ideas, critiques, and questions as Pittsburgh social media came together to debate what could be. Take a look at some of the feedback posted to the Twitter thread here.

“Anybody hear any rumors about when they are going to reconstruct the Fern Hollow Bridge? What do we think the possibilities might be? Crumbled infrastructure is tragic, but it’s a neat-o opportunity to imagine possible futures for this corner of town” – caption from Haim’s social media posts

We don’t know yet what is in store for the Fern Hollow Bridge and the greater Pittsburgh area, but if architects have anything to say about it, the future looks bright.

One thought on “Architects Speak Out for Good Design: Fern Hollow Bridge”